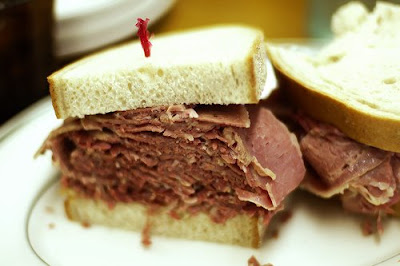 Deli food was completely unknown to me until I was in university. No Jewish people lived in the small one-horse prairie town where I grew up. We were so unrelentingly and homogenously Christian that our minority group was actually the Catholics. Anyway, I first discovered the joy of Jewish deli food in the late 1970s at Reuben's Deli, which was located in downtown Winnipeg on Portage Avenue. It was in the basement of an office building and you had to descend an exterior flight of stairs leading down from street level in order to get to it (not the best architectural design in a city that gets as much snow as Winterpeg).

I loved Reuben's Deli. As a student, I went whenever I was flush enough with cash to afford a lunch out. Mmmm, that sky-high pile of corned beef on real Winnipeg rye bread! Wow, the hot mustard that made my eyes water and my nose run until I got used to it! Oh, the sour crunchiness of the big dill pickle on the side! Yum, that chicken soup and those matzo balls which were such a revelation to me!

And then one day, the City of Winnipeg expropriated the building in which Reuben's Deli was located and tore it down as part of its efforts to rejuvenate the downtown. Reuben's Deli closed and did not relocate. I was bereft. But then Oscar's Deli in the North End opened a new downtown location and the long, slow healing process began.
Posted by Debra She Who Seeks at 12:15