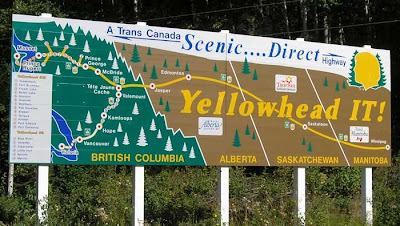 My recent hiatus involved a drive across the prairies on the Yellowhead Trail (Highway No. 16). I was amused by bits of prairie humour encountered in several small towns and cities along the way. Some of it was a wry commentary on Canadian winters, like a Mexican goods import store in Yorkton, Saskatchewan called "The Frozen Cactus" or the East Indian restaurant in Brandon, Manitoba called "Chilly Chutney." Some of it involved bad (but oddly endearing) puns, like the "Jolly Lodger Motel" in Russell, Manitoba. And then there was the Co-op Gas Bar and Convenience Store in Wynyard, Saskatchewan where a sign proudly pointed the way to the "Washroom and Hockey Hall of Fame" without the least sense of irony.