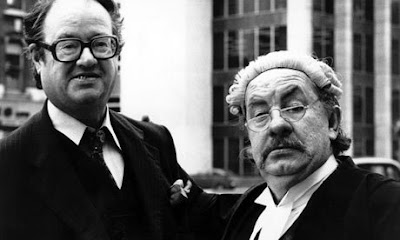 Another favourite of mine who died recently was John Mortimer, creator of Rumpole of the Bailey. For Christmas, my Rare One gave me a complete DVD set of the TV series and we are currently working our way through it with much enjoyment. I've read nearly all of his 20 Rumpole novels and, although Mortimer did descend fairly quickly into plot and stylistic formulas, the books are always a fun and interesting read. He was a witty raconteur and observer of life like no other.

Heather Mallick, the CBC columnist, wrote a lovely appreciation of his life in which she wrote that, during the course of an interview with him:

She also repeated another of his typical and delightful opinions:

Mortimer liked his food and grew fat on it, saying, "I refuse to spend my life worrying about what I eat. There is no pleasure worth forgoing just for an extra three years in the geriatric ward."

Mortimer was a prominent and successful barrister, well-versed in the legal system. He knew better than to be pompous about his profession. "No brilliance is required in law," he once said. "Just common sense and relatively clean fingernails."