Earlier this year, I wrote about my pilgrimage while in New York to see The Dinner Party by feminist artist Judy Chicago (read here and here if interested). About a month ago, I made another such pilgrimage -- but this one was much closer to home! My Rare One and I piled into a van along with some art-loving friends for a little road trip down to Calgary (about 3 hours south of Edmonton). The Art Gallery of Calgary was hosting an exhibit called If Women Ruled the World: Judy Chicago in Thread. Yay! 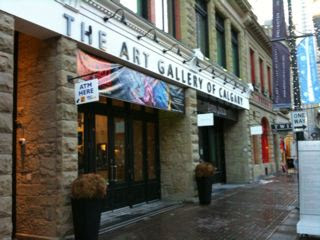 The exhibit was a retrospective of selected needlework, textile and mixed media works from various Judy Chicago projects. There was nothing from The Dinner Party, but there were pieces from some of her other major installations including The Birth Project, The Holocaust Project and Resolutions: A Stitch in Time. There were also some fabulous short films about Judy Chicago and the women who render her artistic vision in needlework and textiles. 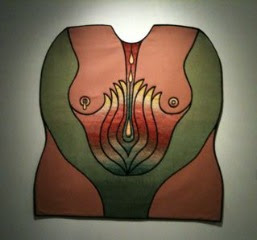 The Birth Project rivals The Dinner Party as Judy Chicago's most ground-breaking and powerful installation. Created from 1980 to 1985, The Birth Project is the first serious representation in Western art of women's experience of giving birth.

Think about that astonishing fact for a moment -- 5,000 years of Western Civilization art deliberately ignored this specific experience as being too unworthy, unclean or unimportant to portray or acknowledge. Not until women achieved sufficient equality to become serious artists ourselves did this central human experience first get addressed in Western art -- a whole 25 years ago! That just staggers me.

The Birth Project is a radical, searing vision of female pain and female power. Its images can be raw and shocking but then again, isn't all truth-telling? Judy Chicago portrays the creative act of birth as connecting women both to the Earth and to the Divine Feminine.

Here are photos of a couple of the larger installation pieces. The first is crocheted in black yarn. It is an absolutely exquisite piece of work. The double shadow effect comes from being hung about an inch away from the wall. 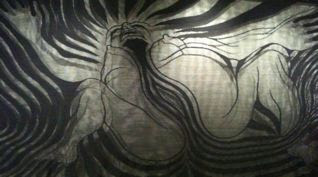 The second piece is created with a short yarn rug-hooking technique and is very lush in both colour and texture.

It was an amazing exhibit and one which I will not forget for a long time!

[All photos taken by my Rare One]

Labels: I Am Woman Hear Me Roar

~you know what the best part about you is...your are always teaching...you share such great wisdom and knowledge! thank you so for truly being the seeker you are...i love the short yarn rug picture...such fluid movement...brightest blessings~

What a beautiful celebration of women. I love the first picture.

My friend, how long ago were you in New York? This sure looks like something I would have really enjoyed. I am really going to have to start looking out for things that are going on around me. I am missing so much.
Mary

I was in NY at the beginning of May 09 to attend the Readers Studio tarot conference. Had a great time but the highlight for me was definitely seeing Judy Chicago's Dinner Party!

Love your photos. I especially like the tshirt below this blog. I should buy for my husband.
Mary

awesome!! love the crocheted black one.. that whole piece to me, tells it all.

how fabulous...i am wild about that first one..

And here I am, not even knowing this was around. D'OH! What an incredible exhibition! The blackwork piece looks amazing - can't believe it's crocheted. (I seriously need to pay more attention to what's happening in this city.)I'm glad you linked to your Dinner Party excursion too; I've been looking for pictures and info on this installation.

faerwillow speaks true - thank you for sharing your experiences!

I love, love, love the last one... Fabulous exhibition.

How wonderful! I was a teenager living in Calgary when the Judy Chicago exhibit was on. For a school project, I volunteered for a weekend at the show, and what an amazing experience that was. I had unlimited access to view the dinner table. I met people from around the world and got to meet Lana Turner who flew up to see the show! It was a sensory overload for me, but I loved every minute. Thanks for posting this story. It brought back a lot of memories.

Beautiful images, beautiful words! I can't get over how much movement is encapsulated in each of the pieces. They make me exhausted just looking that them. Then again, that could be all the benadryl.

Sounds like a wonderful trip. I like all the art work you published here. They are just wonderful..

Lucky you to have had this so close by! I love that last one. Never knew that could be done with rug-hooking!
Bohemian Shadows

That last piece, is incredibly powerful even as a photo. I can only imagine what it was like to view in person. So much pain and pure energy in birthing. Just beautiful. Thanks for sharing these Debra!

The 3rd one is my favorite. Fascinating collection!