For me, some of the most interesting exhibits at the Museum of Witchcraft concerned a few of the British witches and occultists who reinvigorated and reinvented the Old Religion in modern times. For example, the Museum displays a silver chalice that belonged to Aleister Crowley, ceremonial magician and occultist, creator of the Thoth tarot deck, who was popularly known as "The Great Beast." Another display has a few artifacts that belonged to Stewart Farrar, the creator of Alexandrian Wicca.

A large glass case contains a painting of Gerald Gardner, the creator of Gardnerian Wicca, along with various of his possessions . . . 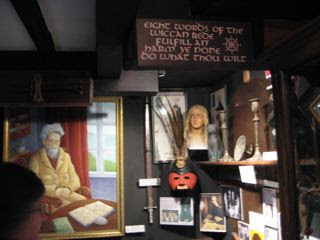 . . . including his High Priest ceremonial robes. 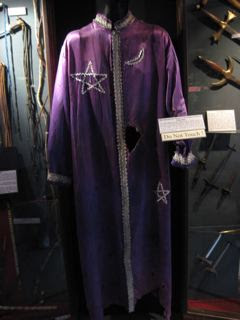 These are the kinds of things that make the Museum of Witchcraft unique!

I would have been interested in much the same things. What a special experience that was!
Mary

What a magical place, love the robe!...

~so much to soak up when you were there...how wonderful to see all that remain...it's quite fascinating...brightest blessings~

wow....this is so cool!!! i have a first edition sets of aleister crowley's equinox. i should start a museum!

I had no idea that such a magickal place existed! Oh thank you so much for sharing, I love seeing and hearing about the museum.

Thank you also for your kind comments and wow, I totally have to get some black leather for wearing in the kitchen now, I love that idea! I am glad my efforts with my food photography came through in the interview too, it is very challenging and I agree, there are few subjects tougher to photograph than food! It's been a tough learning curve but I am getting there.

... and all this time I've been keeping my High Priest ceremonial robe on the back of the bathroom door. I'm such an amateur.

That's like literally walking back in time. Seeing historic items of any kind always make my mind drift back in time wondering what it would be like to travel back if we could.

... and people thought (some still do) that a beautiful purple robe embroidered with moon and stars was evil!? ... It amazes me that a spirituality expressed through reverence for the elements that sustain us was judged as evil ... This truly blows my mind ...

It must be such a moving experience for you to be in that place, pondering all that you see before you ...

Thanks, Debra, for taking us along with you to these fascinating places ... :-)

Wonderful I love this..so want to go too!! Hugs, Sarah

I have to get me one of those fabbarooney robe thingy majiggies!

How fun! So much to see and do!! How did you ever manage to take it all in??

I love the robe. It would get snickers in a circle now - some people think that unless you are in black, you are fluffy. Wouldn't they love to see this?!

What a cool place to visit! I could spend a lot of time in there, just absorbing the atmosphere, and looking at everything!

Thanks SO much for sharing it with us!

Luckily for me, Boscastle is only a few hours' drive away from where I live.

The last time I visited (nearly 18 months ago) I was pregnant with Tabitha. I was the only person in there other than the lovely woman at the reception. We had a bit of a chat and I got very tearful (always a sign I'm about to start channeling). I just wish I knew more about channeling and how to do it more effectively! Bit of a novice here...

thanks for your lovely comments - love your blog
we ahve a website at where you can look at all the objects on display
www.museumofwitchcraft.com
regards
Kerriann (museum of Witchcraft)