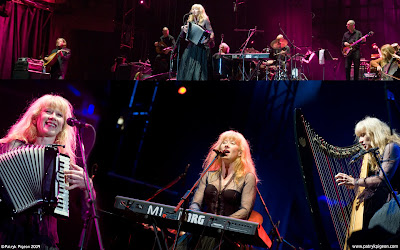 Like many people, I'm a big fan of the multi-talented Celtic singer-songwriter Loreena McKennitt. But not everyone knows that she was born and raised in my home province of Manitoba. Yay, Manitoba! On this date in 1957, she was born in Morden, which is a small farming community located one hour south of Winnipeg near the U.S. border. She lived in Manitoba until moving to Stratford, Ontario in 1981, which is still her home base.

Around 1980 when I was a university student in Winnipeg, everyone was raving about a fabulous young harpist who was playing in the Drummer Boy Lounge at the Hotel Fort Garry. No one knew her name, but they all said "Hey, get this -- she's from Morden!"

The Drummer Boy Lounge was much too swanky for my starving student lifestyle in those days, so I never did see the wonderful unnamed harpist. Years later, however, I put two-and-two together and realized she must have been Loreena McKennitt. What a missed opportunity!

I've always followed Loreena McKennitt's career with great interest. She has known great professional triumph due to her amazing talent and incredible hard work. She has also known great personal loss. In 1998, her fiance died in a tragic boating accident on Georgian Bay. Recently, she was forced to take legal action in England against a former trusted friend and employee who published a book full of personal details and intimate information. Refusing to back down, Loreena pursued her case all the way to the highest British court. The court confirmed her right to privacy and set a valuable legal precedent to protect other celebrities in the future.
Posted by Debra She Who Seeks at 06:02

Ahhh...I adore Loreena McKennitt. Her music was something I shared with my dad; we would get together for painting sessions and listen to Loreena and also The Chieftans while we worked.
Thanks for sharing those tidbits about her...

love her too debra
her music first came to me at "insight"
a film fest for women in the mid-eighties in edm. from the life changing film "goddess remembered"
have not looked back since. thanks for the tribute to a fine artistic force among us.
p

I dearly love Loreena McKennitt! I have quite a few of her albums. I didn't know anything about her personal history though.

Her music first hit me full force in "Goddess Remembered" too, Patti!

I adore her. If you've noticed, I have her on Moontides. She is my absolute favorite. Thanks for sharing this information on her. All I knew was her music, not her history. Happy Birthday, Loreena.
Mary

~i have not heard her music but will be off here in a minute to find her...what a driven person and good for her for taking it as far as it could go....i never have understood why people thrive on exploiting others...brightest blessings~

She is amazing! I didn't know she was from Manitoba. Love her!

Oh Debra I have not heard of this amazing lady until now, and I know I am just going to love her! I have been thinking of harps for a while now for some reason and I think you are the missing link! Thank you Debra, I am going to go and be amazed!

and here I was thinking she was from Wales or similar! I had never heard of her until a few years ago when my blog friend Daisy mentioned her.. so I bought the CD Book of Secrets... fell in love instantly.. now when I listen to it, it is a bittersweet sound as Daisy died a few years ago.