I mentioned that Tintagel Castle is perched high atop an impossibly steep crag, didn't I? From the base of the crag, it's possible to hire a Land Rover to drive you up to the Admission Gate. But after that you're on your own, you poor bastard!

As we stood at the Admission Gate getting our tickets, I looked up the crag face at the line of tourists snaking their way up the almost vertical stairs (yes, at least there were stairs! and handrails!) It reminded me of that famous old photo of the Klondike Gold Rush where all the desperate fortune seekers were crossing the Chilkoot Pass. I thought, Oh crap! Can a pair of nonathletic old babes like us make it to the top? 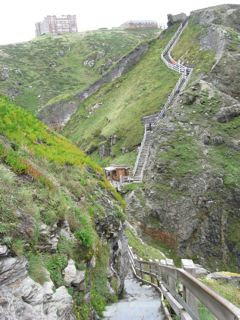 Well, yes we could, as it turned out. We climbed the stairs slowly and rested often. And eventually we reached the top and entered Tintagel Castle through an ancient iron-and-wood door. The ruins which lay beyond the door were magnificent -- open to the sky, the wind and all the elements. We explored the site and marveled at the amazing vistas looking out to sea. 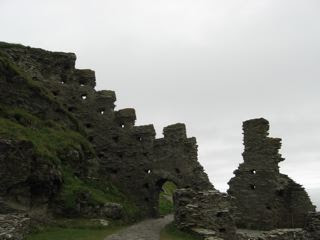 We saw King Arthur's Footprint -- a rectangular depression in a rock which was indeed vaguely foot-shaped if you used your imagination. Our guide, Mara Freeman, said it was the strongest evidence that this location may once have been an actual ritual spot for swearing in Celtic kings, who would have placed their foot in the depression while being crowned. It was common ancient practice to use a sacred rock or stone to seal a coronation. Even today, for example, Scotland's Stone of Destiny is always present under the seat of the Coronation Chair in which British monarchs sit while being crowned. 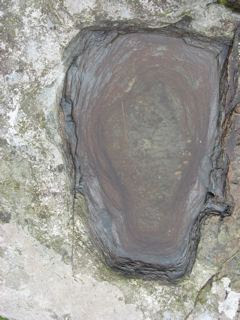 Moreover, recent archaeological discoveries now show that the site of Tintagel Castle was, in fact, occupied long before the current castle ruins were built. So perhaps Tintagel really was the birthplace of King Arthur after all! Who knows? All I know is that my ass muscles were incredibly stiff and sore for the next few days because of that climb.

~what a climb...the most magnificent treasure awaiting at top...absolutely breathtaking...i think you could be my ones history teacher! the sites you have seen and the knowledge you hold within...brightest blessings

Gorgeous!! Not sure I could do that climb though, as much as I'd love to. I'm pretty much a flatlander when it comes to hikes.

What a climb! But I am sure the view from the top was well worth it!
And the ruins are magnificent!

Will rest up for tomorrow's adventure!

Hey, you just know what that "sore ass muscles" remark, will call for, dont' you? My saying that, if only you'd kept doing the climb for a month, think of the shape you two would have been in?!?

I know I couldn't have made that climb!!! But, from those pictures, it sure was worth it.
Mary

Oh the eye candy! Why can't I work any of THIS stuff into my dreams?

I'd only make that climb if i knew how long it would take an ambulance to get to me..
i thought of that when you were saying it wasn't old enough..because they always build on top of ruins..

oh I gotta go there now! of course it is Arhturs footprint :) & if not that one, them I am sure he walked there once. I was most probably there too ;)