The village of Avebury in Wiltshire is home to the largest Stone Circle in England. The Circle is approached by a long avenue of paired standing stones called the West Kennet Avenue. Imagine the large ceremonial processions of robed Druids and followers who must have walked its length at one time! As shown in the following photo, enough stones still remain to give you a feel for its past glory. On the morning we were there, cows shared the Avenue with us, munching grass as we walked by. 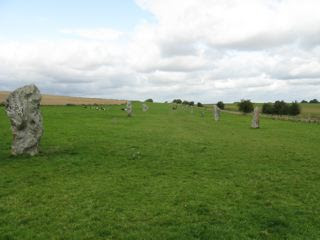 Unfortunately, the ancient Circle and Avenue are today bisected by a roadway leading to the village of Avebury. So a few of the Avenue's stones now find themselves isolated across the road, like this one: 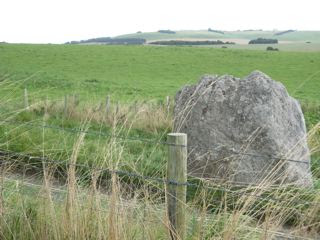 At the end of the Avenue is a huge tree. Walking past it, you come to two great megaliths which form a ceremonial entrance to the Circle. One of these stones has a large indentation like a built-in seat. (You can see it in the upcoming panoramic photo of the Circle). Druids and pagans call this stone "the Old Woman" (a clear reference to the Crone Goddess) and say that "sitting in the lap of the Old Woman" brings good luck and fertility. Like everyone else, I took my turn sitting in the lap of the Old Woman but phew! I'm not pregnant yet, LOL! Rather predictably, Christians and non-pagans call this indentation "the Devil's Chair." 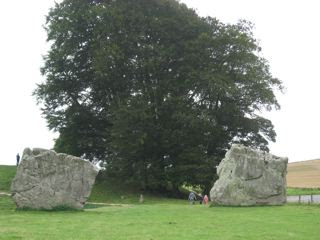 In the following panoramic photo you can see how the Circle is bisected by the road. The road was built in an era when the Circle was not being preserved. In Puritan England during the 1600s, many of the standing stones were systematically toppled, buried or destroyed as evil pagan symbols. In the 1720s, an early champion of preservation angrily wrote:

And this stupendous fabric, which for some thousands of years, had brav'd the continual assaults of weather, and by the nature of it, when left to itself, like the pyramids of Egypt, would have lasted as long as the globe, hath fallen a sacrifice to the wretched ignorance and avarice of a little village unluckily plac'd within it.

Avebury still retains its "henge" or ditch that encircles the Stones. Our guide, Mara Freeman, said that in Druid times, the turf would have been cut away completely to expose the chalk "bones" of the earth. In those days, Avebury Circle would have been enclosed by a pure white henge.

Most of the Stones have official names and distinct personalities. I don't know their official names, but I think of this one as "Grumpy Old Man Stone" -- 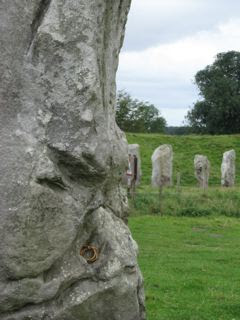 [All photos taken by my Rare One except for the panoramic shot of the Circle, which I found on the internet.]

What a wonderful way to start the day - a walk in the lovely countryside amongst these amazing monoliths! I can almost smell the fresh country air!

The henge is mind blowing. To think that it was all dug by hand. How impressive it must have been to see the circle surrounded by the white henge.

-sigh- But thankfully, common sense came back in style.

~if no baby came surely luck was bestowed upon you!! these are beautiful pictures and fasnicating story you have shared...as i've said before...in awe of your travels...warm wishes and brightest blessings~

Gosh, what beautiful, magical countryside. Thanks for the tour.
Mary

That or "kitty cat sticking out it's tongue stone."

wow! gorgeous photos. looks like a place i'd love to visit. hugs!!

What time of the year where you there? (I think you said it in a previous post...sorry that I don't remember.)

What an excellent pictorial travelogue. Makes me wish I could go there but thanks to you, I can at least visit vicariously. Thanks so much.

did your good luck cross cancel the fertility? so now you get neither- or you've wasted the luck on no baby?
I love grumpy old man!

So beautiful!
...although I've never thought of fertility and good luck being the same thing. I may have sat on a grumpy old woman stone at one time.

So much fun traveling with you on your memories of jaunts. I esp. like the standing stones and have been singing that song "Solsbury Hill" to myself from Peter Gabriel since I read you were going to post on the stones, thank you for all of this, Debra :)

Beautiful circle indeed. Would love to visit it one day.

Very beautiful. I would love to stand in the middle of it on a full moon!

This was fun! Thank you for sharing. I've always wanted to go there and see these...

I too, loved the Avebury Plain, though I'm sorry to say I missed the grumpy old man stone! Please compliment your Rare One for me...she takes great pictures...

I also enjoyed our visit to Stonehenge very much, even if one can no longer get in close enough. There is still tremendous energy generated by these massive stones, isn't there?

Thanks for these posts...they kindle lovely memories for me...

It's really strange to see a road right through a stone circle like that - you'd think they'd have reclaimed the land and sent the road around it at some point.

I cannot wait to go there! just seeing them here in your post kinda makes my soul tingle :)