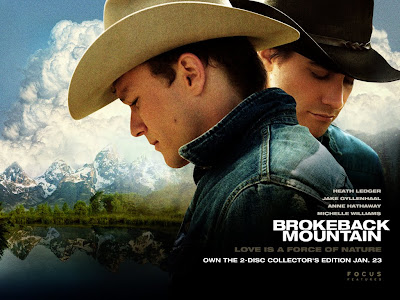 My Rare One and I watched Brokeback Mountain again the other night on TV. It was kind of frustrating because the CBC broke up the movie's flow with a gazillion commercials, bleeped out most of the swear words and cut the two most graphic sex scenes. But even so, they could not diminish the film's tragic story nor blunt its emotional impact. More than a week later, Jack and Ennis are still on my mind.
The first time I saw the movie, the lingering image that I could not shake was the final shot of their two shirts on the wire hanger in the closet. This time the story's tragedy was epitomized for me in a single line of dialogue.
Throughout the movie, Jack is presented as the dreamer, the unrealistic one. At one point he says to Ennis "What if you and me had a little ranch together, little cow and calf operation, it'd be some sweet life." What a modest dream this is. Such a small dream really, not grandiose at all. But utterly unattainable for a gay couple in his time, culture and circumstances. That is the poignant tragedy of Jack's simple dream. He might as well have wanted the moon. He couldn't have that either.
Posted by Debra She Who Seeks at 05:35

Don't you just hate it when there are so many commercials...and always at the most exciting times.

OT but... Thank you for the correct pronunciation of "merde"! MAREdh... Thanks!

Seeeeee, when anything irritating happens, "S_ _T!" simply snaps out of my mouth. It's a habit and it's hard to break. [I'd write the word, but who knows if a Blogger bot would decide that it was a "no-no" in blog land!?! And zap either me, or your blog!?! Eeeeek!]

Why break such a habit? Our children are tired of rushing to cover their wee-ones ears, when Nana breaks a glass and the like. LOL! Plus husband, who doesn't say anything, 'cause he's learned the futility of such.... I know he'd really like it if I didn't pop off with that particular 4 letter word, all the time. And he's very appreciative of my wishes, all the time... And it would be very nice of me, to try.

But! To change a habit, is hard. And I really neeeded a short word, for it. Soooooo, tried to listen to the Pronunciation on a translation site but, gave up. -pout-

Now, a real-live speaker of the language, is telling me the right way to go about it! Yessssss! And "MAREdh" sounds doable. Even for this "Ol' Gal"!!!

Both Heath L. and Jake. G did an amazing job with their sensitivity and authenticness. I remember watching it in a very conservative theater and wondering if everyone around me would be shocked and show it. But no, everyone was crying just like I was. There's hope yet, Debra, right?

That one will bring tears every time.

i think that is one of the most romantic movies of all time!!!

Fingers crossed. Today could be an exciting day here in the States...

Yes- great timing for this post. I was dumfounded when prop 8 passed. I'm so hoping it'll be overturned today and forever. EVERYONE deserves the right to marry.

I loved that movie..wept and wept at the end..what a love story.

I will have to add it to my list of movies to see. Was it a book? I LOVE reading!!

Little Messy Missy, Brokeback Mountain originated as a short story by Annie Proulx in the New Yorker. But it is published in a collection of her short stories called "Close Range: Wyoming Stories." Annie Proulx also wrote "The Shipping News" which was made into a terrific movie with Kevin Spacey a few years ago.

This film always reminds me of my first true love, Matt. My experience with Matt in no way resembles what the men in this move endured (another place and time), but I instantly connected with the feeling I had for the first time in my life that I felt like I couldn't breathe if anything bad happened to the person I was in love with. Or if we were apart for so long.

To this day I still wonder 'what if' Matt and I hadn't gone separate ways. But at the same time, I have absolutely no regrets about what I've done in life. Besides, Hubz is my love now and has been for many years. I love him dearly.

rent the dvd... in the olden days of videotaped movies, one could make copies easily....

Just love this movie, but then for some reason I am just drawn to sad movies.

Not chick flicks (hate those) - truly sad movies. This is one of my faves thanks for the great review.

The shirts smashed my heart into little bitty pieces. Everything that the movie wanted to express was said with those two shirts.