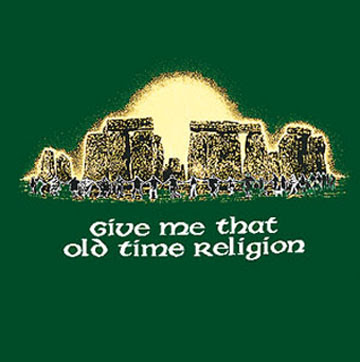 I have now been to both Stonehenge and St. Peter's Basilica in Rome.

The two sacred sites have much in common. Each celebrates the Divine. Each has drawn pilgrims, seekers and the curious for millenia. Both have huge, awe-inducing structures designed to tower over and subdue the egos of those who enter that space.

But here is where they differ -- Stonehenge sits open to the elements and, imposing though its stones may be, graphically reminds us that its stones are themselves dwarfed by the true power and divinity of the Earth. By contrast, St. Peter's is enclosed against the elements, its magnificent glories all man-made. It may indeed point to its own transcendent truth, but that truth is not Nature. A building seeks to contain. An open-air temple simply seeks to acknowledge which is why, for me, Stonehenge radiates more spiritual power.

Oh, I totally agree with you!
Though I have never been to Stonehenge or St. Peter's, I have been to many sacred Native American sites as well as many cathedrals. And I feel that those sacred areas open to the air and the elements do radiate more spiritual power. You can simply feel it in the air when one enters the area.

Given a choice, I'd take Stonehenge any day. There is something magical about being surrounded by the sacred.
Mary

that is how I have felt about churches in general..I always thought that was the secret the Vatican was hiding. that God doesn't want churches, bishops or priests.

I agree too, Debra.

I love going to old churches and cathedrals (not the modern ones - they seem spiritually devoid) but this is because they're usually sitting on top of old Pagan sacred sites and the buildings hold a certain energy. But outside is where it's really at ;-)

Natural as part of Nature is so much more powerful than man-made...IMHO

I absolutely agree with you. Something that bothered me for years as a Christian was the amount of money (which I had very little of) going into the building and maintenance of the church building. I often thought that some of those building were built on the backs of the poor. I love that my "church" is wherever I go and that my backyard has its own sacred space.

Someday I would like to visit some of the stone circles in Great Britain. If not in this lifetime, then in the next. But in the meantime I "worship" wherever the Mother is, and She is everywhere.

Being outside in nature is magical within itself. I find beauty in both and can appreciate the architecture of those very old cathedrals. The very earliest structures built were breathtaking and for the time period in which they were built were inspired by a higher power I believe. Stonehenge is without doubt more spiritual than St. Peters. I have never been to either, but the mere thought of standing in the center of the stones gives me goosebumps.

what a fabulous journey. one you'll never forget i'm sure! i've enjoyed all the pics. hugs!!

I have yet to see Stonehenge but St Peter's I see as a matter of course. I recall the first time I entered the Basilica in 1997 - I turned to Laurent and said: its like being in the Bank of Montreal Headquarters in Old Montreal. That feeling I mentioned in my posting on the Pesaro synagogue isn't there and I've never felt it on all my subsequent visits.

I'm adding Stonehenge to the things to see before I die.

hmmmm...I'm thinkin that I love them both. I love the old churches in Santa Fe and around here. But, I don't really care for the modern ones. Seem like they have been built for the tax exemption benefits/money driven, etc...but, those old ones go deep into my bones. My spirituality doesn't depend on the church, however. Sacred sites, in nature seem much more spiritual and give me a greater sense of peace. If I had to pick, I'd take nature...so I'm glad I don't have to.

wish i could ship you some chicken pie

Honey, I can't tell ya how I have enjoyed reading these Stonehenge post! I would love to see them sometime, Im so jealous you have been. And boy did you see it the right way! Oh and btw- thanks for such a nice welcome back. Yea, us gays do everthing over the top I think!

Yes, I agree with the last person. I've enjoyed these posts too and it's even inspired me to do some more research on Stonehenge.

you nailed it precisely, deb :)

[check out my next week's manic mondays post for another stonehenge take] ;) lol

You've said it perfectly, Debra, about the open acknowledgement of Stonehenge! I do love ancient cathedrals, but they do not begin to match the mysticism and spirituality that embrace one on the Salisbury Plain...

I very much enjoy your comments on my blog! The 'breaking and entering' remark cracked me up..and I was so glad to hear you reference wabi-sabi..the few people I've ever mentioned it to think I'm talking about food! But yes, it is an aesthetic I identify with...

I do agree, however - when I go to a Church, I can feel the hopes & prayers of generations before me.. I have never been to the Vatican but I am sure there must be some residue energies from all those who pilrgim there?