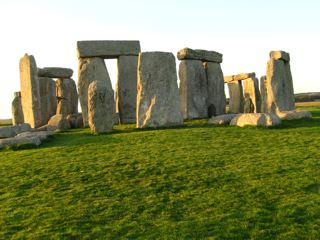 Stonehenge may only be England's third largest Stone Circle but it's definitely the most spectacular, with its huge megaliths and capstones. It rises from Salisbury Plain in Wiltshire like a grand neolithic cathedral.

The public are not allowed to wander freely among the stones any more. The huge number of tourists coming to Stonehenge in the 20th century proved dangerous to the preservation of the site. Now there is a paved pathway and rope barriers to keep people at a distance. 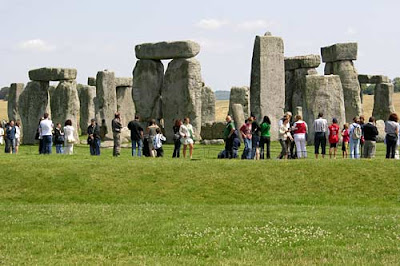 However, it is possible to buy tickets that allow a limited number of people (a maximum of 24 or so) to enter among the stones for one hour at sunrise and one hour at sunset each day. These tickets are in high demand and the waiting list is approximately one year. This is where it's handy to be part of a tour group! Our leader, Mara Freeman, reserves tickets for her tours far ahead of time and moreover, buys up every ticket for the sunset hour on her chosen date so that we in the tour group (about a dozen people) will have Stonehenge all to ourselves.

[First photo by my Rare One; second photo from the internet]
Posted by Debra She Who Seeks at 05:30

Stonehenge just makes a person "wonder"... The Anasazi ruins give me the same feeling.."wonder"! Thanks for sharing and looking forward to tomorrow's post.

~what a fabulous tour guide you had...she definitely knows how to run the show...one could only imagine the sight as the sun began to sink down...stonehenge is on my places to see...one day...one day...warm wishes and brightest blessings~

Oh My! Are you there NOW? I can only imagine Cing these in person. I have such a strong strange connection. I would not even know how my soul would react to this They are breathtaking in photos but in Person OH MY! I hope you have a wonderful Magikal time!

I think that's good they're limiting people, as there can be so much damage to the ancient ones. I better reserve my ticket now then if it's up to a year! Did you feel the spirits of the ones who came before? There's so many great mono/megaliths out there, I want to visit them all!

Gosh, I just love the magic of Stonehenge. I really want to go.
Mary

I was there today!!

One of my favorite places! Up until my last trip I would say it was one of the oddest weather places I have ever visited. I freezing rain, sideways sleet....crazy.

But during those times I did get to walk up to the stones. :) Before they put the gates up.

Last trip was bright and sunny....felt different, like I was making less of a sacrafice to be there. Weird.

To this day when I am in sideways rain I think of Stonehendge :)

you are too funny...if you hang it they will come...

Sooo jealous. I remember when I was younger hearing they had put up a barrier and feeling so sad - you've rejuvenated my joy that there's still a chance to walk amongst the raw power of those stones. Can't wait to hear about it!

A fascinating and sacred place, filled with meaning and significance. Ah, to return to the days when these stones were placed!

(Not to be unmindful of their significance, but the first thing I think of upon hearing the name Stonehenge is the movie Spinal Tap, where the set designer makes these 15 inch high stones for the band's set. The "living rock" indeed.)

You have provided a wonderful visit to stone circles the last few posts. Most interesting.

I can only imagine the sense of awe that one might feel in the presence of these incredible stones.
I can hardly wait till tomorrow when we get to enter! :0)

You got to see Stonehenge? That is so cool. I look forward to your post(s) about it. :)

hmm, I'm noticing that I'm turning an unflattering shade of green..as in envy green...great tour guide and terrific for you and your blessed one.

Lucky You!!!
I can only imagine the amazing energy there...
Thank You for sharing your visit!

How lucky that you had a chance to actually enter the circle. We did not learn about that possibility until we were in England, and of course, no tickets were available!

Imagine your group having Stonehenge all to yourselves! Will be watching for your photos of that...

I thought of your trip to Stonehenge last night when I was listening to an audio book. The audio book was the third in the "Artemis Fowl" series by Eoin Colfer, and it's a combination of sci fi and fantasy.

Well, according to Eoin Colfer, Stonehenge isn't actually a part of human heritage. No, it was a pizza place run by the fairies in ancient times, and they had to abandon the site because of us pesky humans.

Yep, that's right: Stonehenge is just an old pizza place. Nothing at all mystical about it.

perfect, have been intrigued by stonehenge for years, then by other henges, worldwide :)