England's second largest Stone Circle is found in the Somerset village of Stanton Drew. Actually, the site has two Stone Circles, one large and one small, like having a main hall for big rituals and a breakout room for smaller ceremonies! They are located in a farmer's field, so you just open the gate and go onto his land -- 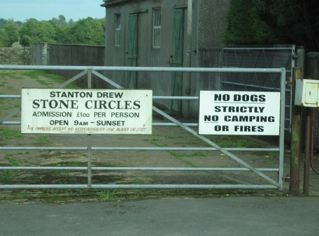 A lot of the stones are recumbent. But there are still a fair number of stones present on the site.

Two local teens were using one of the stones to film a little video about rock climbing. The megalith was cast as a mountain in their production. Some of our tour group thought they were treating the stones disrespectfully but they weren't hurting them, just using them for a contemporary purpose. I don't think there's anything wrong with that, myself.

Beside the Circle is a large tree -- its limbs bare and black, devoid of leaves and life. It's quite a spectacular tree and creates an eerie atmosphere for the Circle grounds. 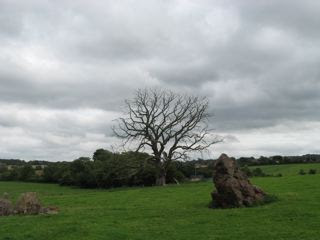 I don't know if it's a defunct oak tree but it would be neat if it were, since oaks were sacred to the Druids. 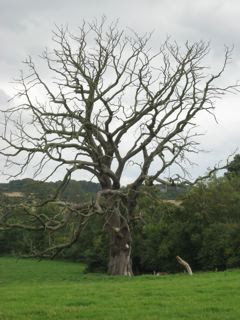 Our guide, Mara Freeman, said that the name "Stanton Drew" is a colloquial pronunciation of what was likely the original name of the site -- "Stone Town of the Druids."

[All photos by my Rare One, official photographer of the She Who Seeks blog]

That tree is eerie...but, it really adds to the atmosphere. Love it... More tomorrow???

I have enjoyed your trip...Thanks for sharing...

Great shots Rare One! Love the tree....something very present about it.
Just learned something this morning, thanks.

that tree is just perfect in that setting!

Great shots. Love the mysteriousness of that tree. Can just picture the old Druids surrounding it.
Mary

I've never been to Stanton Drew - now I need to add that to my 'to visit' list. Beautiful photos from your Rare One :-)

How fascinating that the name was changed so much; I'm sure due to the non-pagans . That tree still seems alive with ancient magick. Thank you for this series, loving it, Debra!

Hello Deb! I wanted to stop by to thank you for all your comments! You rock! :o)

What a great post! I have not seen these so I am adding them to my list this fall. Thanks for the preview tour :)

Love the photos of the tree..they would make wonderful enlargements to frame and put up. Has your Rare One done any of that?

I think it's great that young people were using the site for a creative endeavour. With all these ancient stones have seen, I very much doubt they would view their actions as disrespectful.

It is amazing to see these sites in the midst of what are really just cow pastures isn't it? Sounds like you had a wonderful trip...

I have this urge to go there and climb that tree..what a great place..thanks so much for this.

happy to see you at farmhouse, my friend

i just got out the extra plate....

The tree is absolutely amazing. I can't stop looking at it.

I didn't know about these stones. Thanks for sharing.

oh man, the tales they conjure! :)

Oooh - the tree is spectacular! I'd love to have that in my yard! And the stone circles...and the green meadows... Ah - I'll just move to England.

Excellent post! Bald trees have always freaked me out, as their branches in the air are similar to their roots in the ground, always reaching, changing, invading. But still beautiful creations.

I remember when a few years ago I was on the back of the bike, looking at trees just like this.. devoid of life but surrounded by others much younger, sprouting green and vibrant.. but that old tree with no life still to me, held the ancient knowledge.. an elder of the tree tribe. I love trees !!

I wonder how old that tree is? Oaks are some of my favorites.

I think the Druids would be pleased to know that the stones are still being used today - albeit for a different purpose.
And the tree is most impressive, especially against the gray sky. Amazing how stalwart the trees of ancient times really are/were.
Please thank your Rare One for the wonderful photos. :0)

The Tree is super awesome. I can imagine arms and legs coming to life and it taking off after someone who was not treating her kindly. Yeah, I have a pretty vivid imagination.

As far as the kids, I don't think they were being disrespectful to the stones at all. I'm still in awe and wonder at all there is to discover in this world. I hope I get to them as well in this lifetime. Glad you had a terrific trip!