We entered Stonehenge in ritual procession. Mara Freeman, an Archdruidess of the Irish Druid Clan of Dana, led us in spiral formation to the centre of the great stones. There was silence except for the sound of her ringing bell. We called the Quarters and their guardians: the Hawk of Dawn (east), the Salmon of Wisdom (west), the Great Bear (north) and the Great Stag (south). 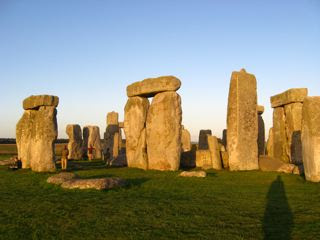 There was a special invocation of the Goddess and a celebration of Autumn's blessings. Then we were free to move about the stones, explore the site and take photos for half an hour before resuming the ritual. 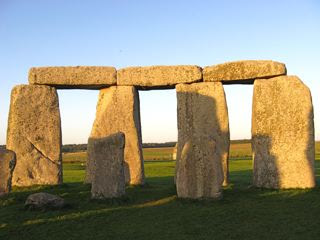 The National Trust's rules for those who enter Stonehenge are strict, of course. You may touch the stones but not climb them or sit on the fallen ones. Obviously nothing can be done to mar or deface the stones or the site. No foreign objects may be left behind. 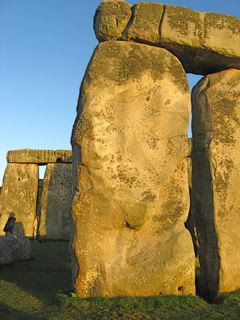 What can I say about the stones? They are everything you would imagine them to be. Huge, imposing, solemn, full of energy. They glowed in the setting sun. Our shadows and theirs were long and dark against the earth. 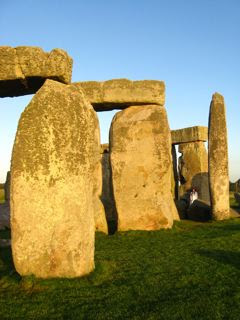 We found a megalith with a sacred yoni at its base . . . 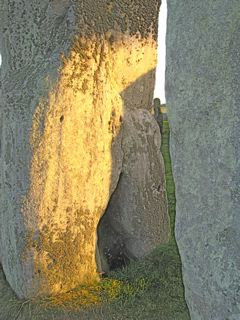 . . . and one that was either pursing its lips disapprovingly or holding in a big guffaw . . . we couldn't tell which? 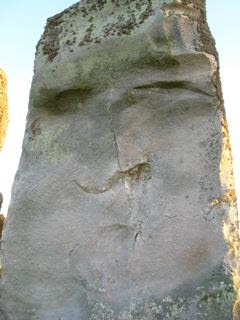 Resuming our ritual, Mara led us in a meditation giving thanks to the Earth Mother. She followed this with a special and very beautiful blessing ceremony using water from the Chalice Well in Glastonbury. After chanting the ancient Druidic chant of Awen, we thanked and closed the Quarters. Our ritual ended just as the sun was slipping past the horizon. We spiraled out of Stonehenge as we had entered, silent except for Mara's ringing bell. 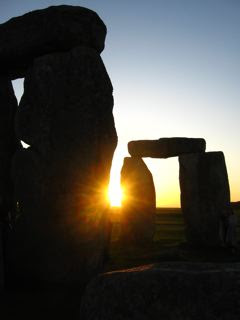 We waited on the paved pathway while two security guards went over the site with a fine-toothed comb to make sure everything was all right. An artist among us who had been sketching the stones had inadvertently dropped a pen. They found it. Otherwise, we left Stonehenge undisturbed!

Tomorrow -- some last thoughts about Stonehenge . . . .

[All photos by my Rare One. Isn't the sunset shot wonderful?]

Oh my, what a wonderful trip. I would love to be there.
Mary

I am breathless....the photography is spectacular! Truly capturing the incredible, awe-inspiring megaliths.

What a special momentous occasion and you shared it with us. Thank you so much!

beautiful photos... thank you so for sharing your story.. I am so envious... it sounds wonderful.

Dropped a pen... -smile- Not on purpose of course.

But so glad they do go over it with a fine tooth comb, so to speak. Preservation, for all the generations to come...

The pictures are awesome!!! Thank you for sharing this special time.

You saw the Goddess and her consort in some of the most sacred forms! Debra, I feel like I've been there with you and makes me want to go even more now!

How exciting! Makes me glad to be a Pagan and a Druid. Thanks so much for sharing the pictures and your experiences.

Beautifully written, Debra..your quiet and reverent description made me feel like I was in there with you..just lovely!

And your Rare One's photos are wonderful as always...the sunset through the stones is stunning. She managed to capture the pure essence of Stonehenge in that one shot...

Fantastic. What a great experience.

I as told by someone at Oxford that in the day they used to go up to the stones with a chisel and hammer and take pieces for souveiers! Never verified that, but it would explain one reason we are not allowed close to them anymore.

So glad you got this experience. Thanks for sharing.

I am absolutely loving this series of posts. I've already told my beloved if we ever only go on one trip, this is the one i want to go on and I linked him to Mara's website and told him start saving lol.

Wow, that is amazing, and what terrific photos!

I was there many years ago, and was surprised and how spiritually it struck me, which was out of character and unexpected. Wish I could go back. Your writing and photos make me want to be there so much!

I can't believe you had the opportunity to worship at Stonehenge!!! I'm envious and so happy for you! Can anyone sign up to join her worship?

City Wiccan -- yes, anyone can "sign up" who has paid for one of her tours that include Stonehenge! Mara's tour website is at www.celticspiritjourneys.com

what a beautiful and special day you had.

Enthralling photos and you have a way of capturing the essence of an experience ... Thanks, both of you xoxo

I haven't been there in ages, but those photos and your descriptions took me right back. Beautiful. Just beautiful. I don't even have a vagina joke. *sigh*

Beautiful pics, very fascinating indeed!!
You have a wonderful blog...
Have a nice day:-)