The Truth About Tai Chi 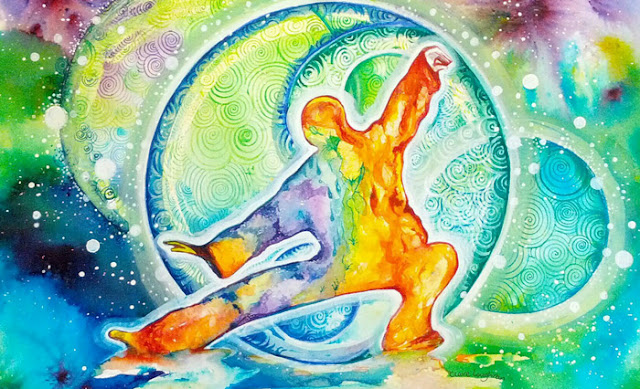 I've been doing tai chi for a year and half now. It's been an eye-opening experience, I must say.

When I started, I was under the naive impression that tai chi was a meditative experience promoting love, peace and zen. Who knows where that idea came from? Probably from watching tai chi's slow and deliberate movements.

This view was reinforced by the charming and seemingly spiritual names for some of tai chi's forms (movements) -- "White crane spreads its wings" -- "Part the wild horse's mane" -- "Fair lady works at shuttle" -- "Step back, ride the tiger" -- "Wave hands like clouds" -- "Playing the lute."

Imagine my surprise to learn that tai chi is nothing of the sort. It is firmly rooted in martial arts. Every form is a fighting move, either defensive or offensive in nature. Like other Asian martial arts, the weapons used are hands and feet. Swords are also used in some tai chi routines. Fans, too. Weaponized fans. 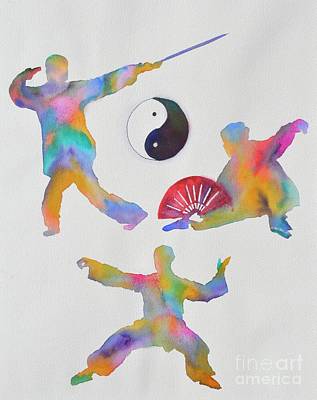 This unexpectedly violent truth was brought home to me when I was learning a tai chi sword routine. I wasn't lifting my sword high enough in one particular form. The teacher grabbed my wrist and forcefully thrust my sword upwards.

Now I know why gentle and meditative tai chi is sometimes called "how to kill someone in slow motion."

I've done Tai Chi for several years now. Yup, it is a form of martial arts. We to Shibashi every Friday so I am getting ready to go now.

I need a t-shirt that says: Weaponize Fans. STAT.
Tai Chi is fantastic. I like how deliberate the moves are and how precisely people execute them. Now, let's perfect that throat slash!

Coincidence - I just started learning Tai Chi this month. It wasn't really my first choice, but a friend of mine wanted to give it a try and wanted something with more "gentle movements" due to some shoulder pain and foot pain. I didn't love it at the beginning but now that I'm starting to figure out what to do with my hands and feet at the same time, it's neat. I liken it to my daughter learning a dance routine for weeks and weeks, bit by bit and then it all coming together. And yes, these are all martial arts fighting / defence moves. -Jenn

i did not know this.

Beautiful, but deadly, I guess.
If you so choose?

I might try it IF that lovely colored costume comes with the course.
Of course it does!

Yikes! is right. Although I've kind of known it had some martial arts movements, I always thought it was a form of exercise for strength and balance. Kind of a zen yoga. I'll stick to walking the dog and gardening.

Lol. An eye opener for sure!

I recently started tai chi. I really like it. It helps me with balance.

Does this mean you could beat somebody's ass now?

And here I thought I was going to be reading about a hot beverage that my son and his family loves! That must be another chi.

Hi Debra. I've been practicing the farmer version of this as I do strange movements to clean my tractor window without sliding off the icy tire. I don't bounce as well as I used to.

Your gonna be one bad ass Tai Chi Bruce Lee. But I agree, it seems so sweet.

Remind me not to tick you off!

Hello Debra, Just don't try to get that fan on board an airplane. --Jim

Beautiful art and a great way to stay in shape too. Kudos to you for getting on board with this. Hugs, RO

Remember that David Carradine series Kung Fu? He played a spiritual teacher who beat the hell out of people. Maybe Tai Chi evolved out of that.

I'm not picking any fights with you.

I definitely want to stay on your good side!! I still think of Tai Chi as graceful and flowing!

Wait, what? I learned some basic tai chi - it was about welcoming the life-sustaining sun, embracing balance...I wasn't even high at the time. Must be a Canadian thing, with the Royals among you now. Strange. Still, you are a badass.

Very Nice! I hope you are loving your deadly exercise routine!

(Btw: I actually have one of those weaponized fans and know how to use it. It's one of my favorite weapons because it seems harmless. I also love stick forms because how often do we have our swords with us?)

These are beautiful. I am so happy to know you do Tai Chi my mom did it everyday and swore by it. Happy weekend to you.

Tai Chi is great for balance - a great benefit as you grow older. My wife and I are now beginning Qi Gong. It doesn't require the space that Tai Chi requires so we can do it at home in our living room. It is more relaxed.
the Ol'Buzzard

I've done Tai Chi off and on for well over twenty years - it's been almost two years since my last foray. I believe that on one of the first TV Ontario programmes (which is where I started it) they referred to it as a martial art. May be time to start again.

It is great that you have kept up for a year and a half even though it was not exactly shad you were expecting. Good luck and have fun going forward.

Parkinson's exercise groups do it for the balance part.

Yeah, Tai Chi is exactly that. It's learning how to kill in 108 moves or less and do it in slow-mo. I've been doing Tai Chi for almost 8 years now. I kind of figured the moves were killer into my second year but I love doing it because it is relaxing.

And for those that need spelling help (like me), try Grammarly.com. You can use only the bare basics of it and it works just fine.

And here I thought the only weaponized fans in existence were lovers of British soccer and/or rugby teams!

I'll stick with swimming and maybe goat yoga, thanks.

I have learned something new today. Tai Chi sounds a lot more exciting than previously thought!

Wow, really? I had no idea!

Hey, Debra, I'm not sure if you've heard, but Ron and Jim's beloved Sophie died a few days ago. Just wanted to mention it in case you didn't know. Jim shared the information on Facebook. They are both - understandably - very heartbroken. Anyone who has ever lost a beloved pet can relate to that grief.

I never realized all the marvelous names for the movements. Nor did I know that tai chi is based on sword fighting! Fascinating! This practice is something I would love to try at some point.

@ Martha -- Thanks for letting me know! I'm not on FB so I hadn't heard. I'll email them right away -- so sad. Sophie was such a lovely dog.

Throat slash huh? Hmm gotta look a little closer at all the old folks doing Tai Chi in the mall. They don't look like throat slashers....but you never know!

Oh my gosh, yes, she was! And she was so loved. They shared oodles of photos on Facebook, so Sophie was very well known. Jim and Ron are going through a very hard time right now but they are getting a lot of support from friends and family. They will be happy to hear from you.

I guess I need to start doing tai chi.

Who knew?? Certainly not I !! Interesting..

Your post makes me think that I should have stuck it out with my tai chi classes. I only went about six times before quitting.

I never knew that either!

Jeezus! I had no idea. Kinda makes it more interesting though, doesn't it?

Now, I need a weaponized fan. Red and black.

Holy. mackeral! I had no idea it was to be used as violence. :0

Here's my favorite tai-chi story, after yours, of course. A friend of mine at the Salisbury Zoo in Maryland was serving as a docent at the Halloween Open House. This meant being stationed near the puma's cage and talking to groups of kids about the puma when they came by. During a slow period, she decided to practice her tai chi. When she turned and looked at the puma, he was crouched in his cage and staring fixedly at her.

The Other Doctor where I work swears by it as quite calming.
He's been meaning to get me to try it for some time now.

Debra, we are just kindred souls. I've always want to do Tai Chi. I could never find a class at the right time, right place. I'm going to check on line right now and see if anything new has popped up. What I really need is a class for seniors whose knees and shoulder ain't what they used to be!!

Good for you , wonderful exercise! I’m smiling at a memory of my kids when they were little running home to tell me the people in the cottage beside us were trying to fly lol, the couple beside us were practising tai chi and my little monsters were watching through the bushes, giggling and laughing, you see this was 1980, rural northern Ontario, we had never even heard of tai chi before, not very worldly but my kids really thought they were trying to take flight!

every year I say I'm going to start doing Tai Chi..maybe this year.

Changes how you think of those parkfuls of little old ladies doing their morning exercises...

So what I'm hearing is that you are now trained for combat. Let us know when you get taught the murder fan technique.

your conclusion made me laugh though
i think not bad for the self defense ,right ?

LOL! So poetic and deadly!

My meditation is on the bike, I've never been near any sort of martial art aside from a judo session when I was a kid and a bit of paper folding.

Wow Debra, I never knew any of this! I took tai chi a few years ago. It was a night class for about 3 months. I was thinking of getting back into it. Maybe I should after what you have said! LOL! I actually did really love it, but we didn't get to the point, to where you are talking about. We were learning all of the "steps".