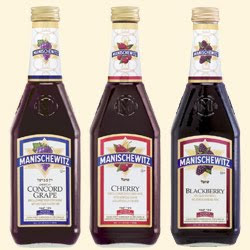 5. I once got completely drunk and disgustingly sick on Manischewitz wine.
Many, many years ago when I was young and still under the mistaken impression that I was straight, I had a boyfriend named Doofus. One weekend we decided to go to the annual Ukrainian Festival in Dauphin, Manitoba. Our plan was to camp, eat perogies, watch the dance competition and get drunk. There was only one small hitch. A liquor strike had just started that day and desperate boozehounds had already bought out all the inventory in Winnipeg. So we stopped at every one-horse prairie town on the road to Dauphin in the hope that their smaller populations had not yet cleaned out their liquor stores.
And yay! We hit paydirt in one tiny town! We scored the last six-pack of some obscure brand of beer for Doofus and the last bottle of wine on the shelf for me. Hmmm, Manischewitz -- never heard of that wine before . . . .
As I came to learn later, Manischewitz is kosher Jewish wine used for seders and other mealtime rituals. It is incredibly, extraordinarily, sickeningly sweet. A small glassful of it at a ritual is one thing. I drank the whole friggin' bottle on top of a stomach full of perogies. I have never been so disgustingly sick in all my life. I'm sure it was the judgment of Yahweh on me for misusing the sacramental wine of His Chosen People.
Posted by Debra She Who Seeks at 06:15

Love it, and where in hell did you find Jewish sacramonial wine in a small town in Manitoba. har har

Oh yes, I have gotten sick on that wine, too. What an awful feeling!!!

LMAO..you just crack me up. I got my nose broken that way once..was Goldschlagger(sp?) though...ackkkk sickning sweet cinnamon! I ahd two black eyes in the morning!!
Hugs and giggles, Sarah

A red wine hangover is monstrous - but Manischewitz must be the ultimate assault on anybody"s body. Well, you lived to tell the tale.

oh my goddess....manischewitz...im surprised you survived that...i just shuddered....
did i tell you that my friend kevin who is droba's alter ego is gay and has 4 adopted kids?...i cracked up when i read your comment on the post..haha

Familiar with "The Brews" by NOFX? lol. I too have drank my fair share of this lil beverage! Thanks for following my blog!

LOL yeah I think it was because you didn't use the sacramental wine the right way. Perhaps it shouldn't have been on top of perogies :) How funny this experience was.