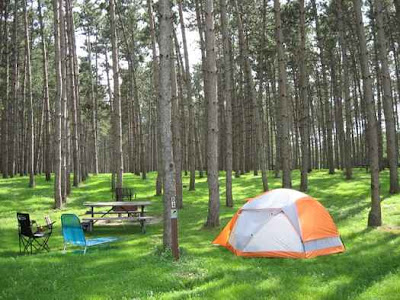 6. I despise camping.
I don't simply dislike camping. I don't simply hate camping. No, I despise camping. I despise it with every fibre of my being. I see absolutely no point to it. Why would any sane person want to sleep in a tent, on the ground, with inadequate or non-existent toilet and showering facilities, while having to haul every little thing with you so you can "rough it" at mealtimes?
My family never went camping. My father had served overseas with the Canadian Army in World War II. He'd had enough "roughing it" to last a lifetime. The only time I ever went camping was with Doofus at the Ukrainian Festival. He brought his tent but forgot to bring the tent poles. So we had to prop up the tent as best we could with a couple of fallen tree branches. That, plus the Manischewitz incident, confirmed my bad opinion of camping.
Refusing to go camping has been a real dating liability for me in the lesbian community. Camping is the official pastime of the Lesbian Nation. Lesbian women live for camping. They dream of it. They camp as much as possible. Entire festivals, like the Michigan Womyn's Music Festival, are organized around camping. Just try to find a girlfriend who doesn't want to go camping! Not easy, not easy at all.
Posted by Debra She Who Seeks at 06:16

Hmmm....so do you have to turn in your official lesbian card at the door if you hate camping???

I can't afford to hate camping. Mostly because I stay broke because I went back to grad school in my 40s, can't afford a hotel, and it's my only chance to get out of my house. Some day I want to become a camping snob. I want to pull up in a fancy camper, complete with air conditioning and a frig, and camp -- upscale! LOL

LOL - my parents dragged us out camping all the time when I was young. Now, I won't go unless I'm off the ground! I have a tent trailer, with a "princess and the pea" bed. I've put so much foam and padding on it, I can barely close the trailer. I sleep like a baby in that thing!

hahaha...i love this post! i hate camping too. when my kids were small they wanted to camp so i set a tent up about 10 feet from my garden room and we slept in it. i never understood the whole notion of camping. were you a fan of the L word? i can't believe it ended. i loved that show. they went camping.

I went camping one time...up in the mountains in Northern New York State. The very first night we had a severe thundershower. That was my last time camping.

Hiya Debra! Here here! Give me a hotel and room service any day!

LOL...I LOVE camping! But I have had pretty good experiences with it. Camping is so much fun with the right "equipment" like blow up mattresses and poles...

I camped as a kid all the time. Learned to hate it as we were always on assignment for cleanup. In the dirt!! So I'm with you. Give me a comfy bed with 600 thread count sheets. Not that I do that much, but hey , a girl can dream. Camping? No thanks.

my idea of roghing it is not having my own pillow..no thanks..i did enough camping when i was young..my ass wants a nice firm bed, my pillow and not worrying about something eating me for dinner.

Oh fuck, I am laughing my head off. Hillarious.

Oh no camp beds or tents for me, I need a bed off the floor and I need a roof over my head that doesn't leak.
I've not been camping since my first husband took me to Cornwall when I was 20, hated it and hated all the insects who thought I was a ready meal for them

I hate camping too.. hate it with a passion. but I do love going to our little Gypsy caravan that we have by the sea.. that is about as rough as I do it.

omg, this is so funny.

We despise camping as well. And I had no idea lesbians were so into it. WHY??
It's just so very wrong. I mean, back in Australia, it was one thing, but people camp in EUROPE. Like, when it rains and everything!

You went tent camping without the tent poles? That's happened to me too. It was rather amusing in retrospect.