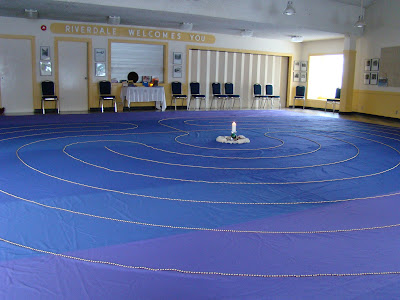 For ten years, I have been walking a beautiful labyrinth handcrafted by two Edmonton women, Sheryl Ackerman and Jean Ure. On a large broadcloth base of blues and violets, they stitched down long strands of golden beads to form the classic Cretan labyrinth design. This portable labyrinth is set up four times every year in a local Edmonton community centre, Riverdale Hall.
Each quarterly walk occurs during one of the four seasons -- winter, spring, summer and autumn. Riverdale Hall has gloriously large windows through which the seasonal outdoors can be viewed as you walk. And a seasonally appropriate centerpiece is always placed at the labyrinth's centre, usually involving a candle, small altar cloth and flowers. The labyrinth room is silent except for a trickling fountain in the corner. Men, women and children of all ages come to walk on the appointed Saturday morning. 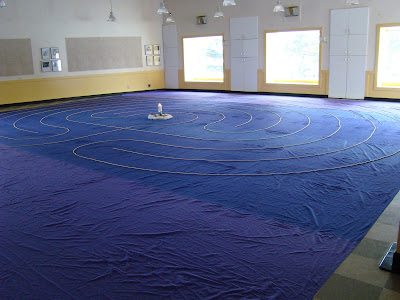 I fell in love with the Riverdale Labyrinth as soon as I first walked it in 2000. I have never seen such a creative or beautiful labyrinth anywhere else. (And coincidentally, Sheryl was one of the women who designed and created the hayfield labyrinth in Manitoba where I had my first labyrinth experience -- small world, isn't it?)
My next two posts will be poems I wrote which were inspired by the Riverdale Labyrinth.
[Photos © Sheryl Ackerman. Used by permission. Thanks, Sheryl!]
Posted by Debra She Who Seeks at 05:31

~how beautiful is that...both what these two ladies have made and the thought behind such...portable...amazing! i can 't wait to read what you wrote tomorrow....warm wishes and brightest blessings~

Doesn't it get very crowded with everyone there on one day...? I think that would spoil it for me. (just a personal view).

I can see the attraction of outside labyrinths where you are in the midst of nature, does being indoors feel different?

Sorry if these are uneducated comments, I am not a labyrinth walker but I'm interested in your blog posts.

Juniper, your comments are welcome! Sometimes the labyrinth can feel crowded but I just wait until a few people finish before I commence walking. Usually it's not a problem, because the labyrinth is open for a few hours and not everyone comes to walk it at the same time. It's more of a "drop in" approach. You're right that nature is experienced more directly outdoors but I like indoor labyrinths too. Each one has its own charms!

That is such a great idea!!! I have never thought of doing one inside!

I would have never thought to make a portable labyrinth. Fist bumps to those crafty women. I need someone to build me a portable path to remind me where the hell I'm going.

It does look beautiful...

It's lovely and such a great idea. I wish they'd do something like that here.
Mary

What a great idea to have a portable one for all people to experienced them..This one reminds me of an ocean. I always knew you could walk on water, Debra ;)

so beautiful...no wonder this inspired poetry..the color is so rich and soul satisfying!

Cool! I never walked a labyrinth, but would love to. Can't wait to read to what direction the walk inspired you. :)

Riverdale. Something about that name, I just like it... :)

that is really lovely. you have created a monster here..Now I'm not going to be happy until we have one here in West.

what a great idea to create your own moveable labrynth. Just cut fabric the size of a room and sew on beads!

What a beautiful labyrinth! It's such an insiring thing to create one that can be transported and done so well!!!!

What a great idea....a portable labyrinth! I want to find one!!!!

What a perfect thing for places where an outdoor labyrinth isn't available (plus - great for the Winter when it's too cold for walking!) What a gift these women have given the community!

That is such a beautiful piece of spiritual and practical art. It's no wonder this is your favourite. Stunning!

This is a true work of art..so simple and so beautiful. Blessings on Sheryl and Jean for their inspired creation!

I would love to see something like this in Vancouver...

I would love to go here Debra! Amazing! Big Hugs!