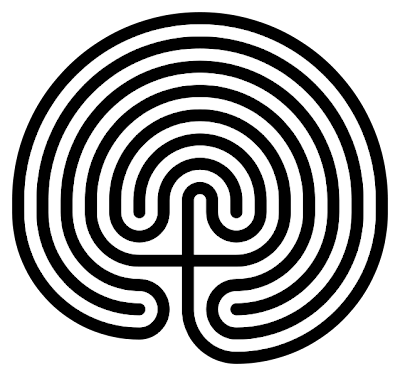 The Cretan (or Minoan) labyrinth is the oldest form of labyrinth. It comes from the ancient Goddess-centred Minoan civilization which once flourished on the island of Crete in the Mediterranean Sea. This labyrinth is sacred to the Great Goddess, as evidenced by its circular shape (a central symbol of the Divine Feminine). The four rounded turns within the labyrinth are known as "the breasts of the Goddess."
How does this labyrinth's unicursal nature fit with the ancient Greek myth of the Minotaur? The Cretan priestess Ariadne gave a ball of red yarn to the Athenian hero Theseus so he could trace his way into the labyrinth, kill the Minotaur at its centre and then safely find his way out again. That's a description of a maze, not a true labyrinth. 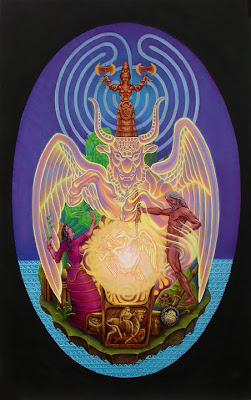 I think the myth we know today is a later patriarchal version interpreting (and distorting) much older symbolism. We know that bulls were sacred to the Goddess in ancient Crete. "Minotaur" means "moon bull" so it was probably a revered symbol of the Divine Feminine in Crete's early days. In the myth's patriarchal version, the Minotaur becomes a symbol of death and evil which must be slain. Scholars also believe that Ariadne was originally the Great Goddess Herself but was downgraded in the patriarchal myth to simply being the daughter of the King and a priestess in the temple. She betrays her people and her religion to help Theseus, who callously uses and deserts her.

So, given these later patriarchal distortions, it's not really surprising that a unicursal labyrinth gets recast as a multicursal maze. It moves the plot along, creates suspense and sets the context for Ariadne's betrayal. In fact, this Greek myth as a whole may be understood as a metaphor for the ascendancy of patriarchal culture over the Goddess-centred culture which preceded it.
Now that the Divine Feminine is being actively revered again in the western world, walking Her labyrinth has become a popular expression of Goddess spirituality and devotion among pagans.
We tread Her sacred path once more.
Posted by Debra She Who Seeks at 05:34

Thanks Debra...found a few in my area...can't wait to check them out...

Thanks, Debra. This is great. I am enjoying this.
Mary

Never thought of worshiping the Goddess through a Labyrinth. Interesting.

I'm loving this series Debra.. learning so much - thank you!!

The island of Crete was one of the last gylanic (a better word than matriarchal) cultures that existed - with a population that lived in equality and a great wealth of arts and culture, with matrilinial descent. They were over run by the Mycenaean Greeks beginning in 1420 BCE and the changes from that invasion and destruction of culture probably produced the changes in the myth from Labyrinth to Maze, from Goddess worship to death in the center from a monster...

So I'm getting the impression you have a thing for labyrinths! I can kind of see why--very fascinating and I LOVE that idea about turning off the left brain and engaging in a meditative experience. Now, to talk my husband into putting one in our backyard...
Great blog! Thanks for stopping by mine!

I think if the Goddess had her choice for a sacred path for her, it would not be twists and curves and circles..it would be one long path...just a straight path to her.

Nice history lesson. I always find it curious how the origins of stories and meanings change depending on who is in power at the time, or what the majority of people believe in.

Interesting that you mentioned 'Pagan'. I read a few years ago that before the 'church' took over turning the word into something sinful, the word pagan referred to someone who lived outside the major metropolitan areas - countryside, villagers, etc. who didn't have easy access/transportation to the great city churches.

And in the great re-working (or shall I say the reinvention and absorption of various religions/beliefs by the church, they turned the word pagan from something that just referred to a geographic location of a people to something that was sinful.

Bwah! Men and their balls.

Today, the truth, through research is finally being revealed.

Interesting. I hadn't known that.

I have seen this labyrinth before, though, although I don't think I've walked it. Every time I see it it reminds me of the human brain. I don't know why, it just does.

Reading about Crete and the Minoan culture was one of my favourite history projects in school. It's too bad your post wasn't around then!

I do love walking the circular labyrinth a few towns over. I try to do it several times a year.

Thank you for this interpretation.

And to 'Cameron,' for her comment information. And for my learning the word 'gylanic.' Must look up more, on that.

Thank you Deborah- I truly enjoyed reading this post. Angie

Oh so cool, Debra...I always loved the myth about Ariadne and Dionysus. This series has just been fantastic :)

Not many labyrinths to explore in NYC, unless you count the subway system. You just made me miss Illinois. I love the Midwest of the US during the Fall. People start getting excited about Halloween and you find labyrinths everywhere.

Was in High Park, Toronto today and I walked the Labyrinth . . . thought of you :)

Anyone in a swan dress is sexy in my eyes! Hehehehehe Man, boy, girl, woman, goat...ummm I mean not goat. ;0)

I, too, am loving this series, Debra! I'm learning so much and adding to my vocabulary. The history and practices are all so interesting. I didn't realize there were different types of labryinths. Thank you for expanding my knowledge.

Fascinating and revealing Debra. Thank you for this explanation/interpretation of this ancient story.

This is great info.. Thanks..

I so enjoyed this interpretation, and love, 'We tread Her sacred path once more'. Beautiful...