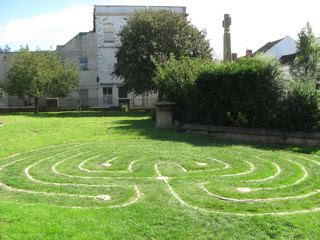 I walked this lovely Cretan labyrinth in Glastonbury, England a couple of years ago. It is centrally located on the lawn of St. John the Baptist Church.

After Henry VIII destroyed and looted Glastonbury Abbey in 1549 and ordered the brutal execution of its Abbot, the town of Glastonbury was spiritually, economically and socially devastated for the next 150 years. But that bleak period ended in 1705 when Queen Anne granted the town a Royal Charter, a mayor and town corporation were elected and Glastonbury began its return to civic order and prosperity.

In 2005, this beautiful labyrinth was constructed to mark the 300th anniversary (tercentennial) of the Royal Charter. It was financed by the town, local businesses, charities and individuals. As stated in the labyrinth's tourist pamphlet, it was built by volunteers:

. . . from all sections of our community. Initially, the students from St. Dunstan's school dug the trenches for the walls. As for cementing and laying the stones, a lovely cross-section of the community volunteered their services: several from St. John's congregation, local Somerset lads, Christians, pagans, Buddhists, members of the alternative community, travellers from the benches, old, young, a tourist or two, a pilgrim or two, and many others.

At the centre and each turning point of the labyrinth, there are inlaid sculpted stone markers celebrating Glastonbury's spiritual heritage. More on those special stones in tomorrow's post! [All photos by My Rare One]

How lovely, and how fortunate you are to have actually been there! I'm looking forward to reading the next installment of your story. Thanks so much for sharing it with us!

very interesting. have a great day.

I always enjoy these posts from you. One of these I'll visit one in person.

Allllllllllll those people, came together, to build this! This seems to me, like the most beautiful thing, about this place.

The first photo is gorgeous!
How very special that the community came together to build the labyrinth. Truly spiritual - I imagine the air just about vibrates with energy!
Looking forward to tomorrow's post....

It's lovely. Oh, how I wish I could go there.
Mary

Yay! Return to Labyrinth posts! This is lovely...looking forward to the post about the stones!

You're really selling me on the idea of labyrinths. This one is just lovely.

looks amazing....an ancient place for meditation always is so special....

I love these posts..the pictures are fantastic and the information is priceless..

Ooo, lucky ladies! Looking forward to more pics. You are quite the labyrinth connoisseur. Now how can you make this work for you... ;)