At another turning point of the Glastonbury Tercentennial Labyrinth is a sculpted stone marker dedicated to Joseph of Arimathea, the uncle of Jesus who brought the Holy Grail to Glastonbury. The stone portrays his miraculous flowering Holy Thorn: 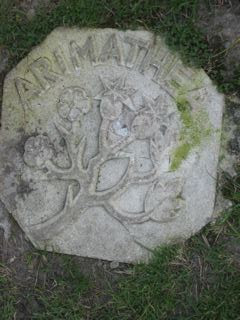 The final stone celebrates Dunstan, a 10th century Glastonbury monk who was a musician, artist (illuminator of holy texts) and metalworker. In a spectacular religious career, he rose to be Abbot of Glastonbury Abbey, Bishop of Worcester, Bishop of London and ultimately Archbishop of Canterbury: 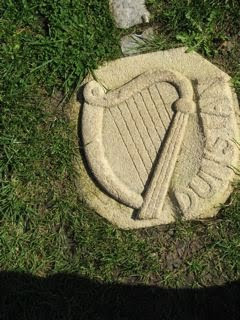 It was a beautiful sunny day when I walked this labyrinth. Despite the churchyard being so close to High Street, the centre of Glastonbury's shops and restaurants, it was quiet and peaceful. A most lovely experience!

[All photos by My Rare One.]

Thanks for sharing these photos and the story behind them. I find labyrinth's and medieval christian symbolism to be endlessly fascinating. I would love to walk this someday.

So much significance (the carved stones)in such a simple design (the labyrinth).
Thank you for sharing with us! :0)

sounds mighty powerful....would love to go for a walk there.....

I Love stones like these. Hmmm, now how can I get some for my own backyard? thanks for sharing these gorgeous stones and your journey.

Intriguing choices to honor is such a special way. I can't help but wonder whom else was suggested, and the debate over who was chosen.

I love the symbolism for each of the stones. They seem so perfect, and the design is ageless.

Thank you SO much for sharing them with us!

I am so glad that you have shared this with us.
Mary

thank you so much for sharing this with us..i likes it.

How awesome if must have been to walk though there looking at everything. Thanks for sharing.

Dunstan was one accomplished fellow! And Joseph and the Holy Grail....very intriguing. Oh how I want to walk one of these someday. Thanks Debra.

That looks terrifically historic and peaceful. How long since you were there. I know they have a concert series there. Did you attend?

Kal, we were there in September 2009. But we didn't see the big Glastonbury Music Festival -- I think that's held annually in the spring or early summer perhaps. And technically, it's held in the next town over or something, not even in Glastonbury itself! But I guess the name of Glastonbury has a greater recognition factor than the name of the actual location!

i feel something coming from these... maybe i'm getting empathic in my dodderage?

"...the uncle of Jesus who brought the Holy Grail to Glastonbury."

It's supposed to be in Glastonbury?

"Where exactly the Holy Grail ended up after being brought to Glastonbury is a bit of a mystery."

Ahhhhhhh! It came. Then was lost! What a cover story! ,-)

Thank you for sharing this wonderful piece of history with us. I am quite fascinated by English history actually and you have shared something I certainly was not aware of.

Very interesting symbols and topic. Thanks for sharing..

I was at Glastonbury on Saturday :-) Not walking the labyrinth though - in the book shops!

Ah damn...you made me cry again, when we got to the stone with the Holy Tree of Glastonbury on it...do we have any word of how the trunk is doing? It is perfectly capable, if it survived, of growing back, and I know they have shoots they can replant with. Thanks for sharing this. Love the Monks stone with the harp. Wow. Its definitely on our list of places to travel someday...when we're not as poor as church mice...

Hi Cameron -- I check the news feeds periodically but haven't seen anything further on the crime. The last I read, they were offering a big reward for the culprits but I don't believe there's been any arrests yet. There's great hope that the stump will regenerate growth but even so, it will be many years before it looks good again.