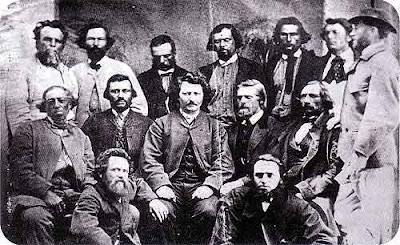 In 1869, the Canadian government obtained control of the Red River Settlement from the Hudson's Bay Company. The Canadian government sent an English-speaking governor to run its newly-acquired territory. But the French/Native Métis people of the area feared that the government would take their land and treat them badly.
Their leader Louis Riel and his armed men rode out over the prairie to stop the governor from arriving. They built a barricade -- in French, la barrière -- near the village of St. Norbert. The governor was halted and sent packing back to Ottawa. This was the start of the Red River Rebellion.
Louis Riel formed his own provisional government (pictured above) at Upper Fort Garry (now Winnipeg) and ultimately negotiated the Settlement's 1870 entry into the Canadian Confederation as a full province called Manitoba.
The barricading and successful expulsion of the Canadian government's representative is commemorated today in the name of St. Norbert's quiet and peaceful little park. I'd love to go back sometime and walk in its woods again.
Posted by Debra She Who Seeks at 05:31

Interesting story, thanks for sharing a bit of Canadian history.

I've never seen that picture of Riel's provional government. They REALLY look as if they mean business. Canada needs to make peace with the spirit of Louis Riel.

I have decided to find some books on Canadian history..I know next to nothing about my friends to the north's history..that is fixing to change.

I like to go to places and imagine all that has taken place there. It's neat to learn the history.

I love learning about the history of a place before I walk through it. Unless that history is mass genocide.

Anything that has to do with the prairie has got my attention.

Great post! I always enjoy learning some history - especially about our beautiful country.

The gentlemen in the photo look very stern and committed. They are inspiring, as I am sure a lot of us (at least in U.S.) would love to send some politicians packing! Very interesting post!

Lovely reminiscences (did I spell that right?) I like the way you're teaching the internet world about Canadian history!

Now I finally understand Riel's role in Canadian history! Thanks Debra.
Yes, you and yours should get back to this park.

french/native metis, riel is the seated guy in the middle

he was hanged, for treason, i believe, but his story, and family, live on....

Interesting! So much rich history and heritage in your neck o' the woods.