Way Up Yonder in Winnipeg 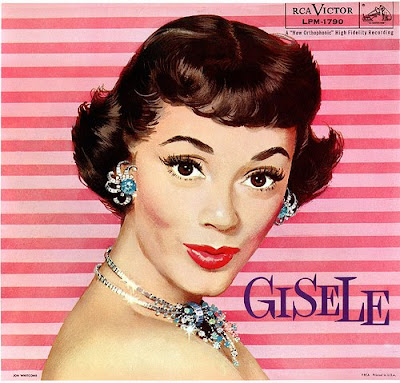 I don't know if many people remember her now, but Gisele MacKenzie was a popular singer and performer in the 1950s and early 1960s. She often appeared on the TV shows of stars like Jack Benny, Pat Boone, Tennessee Ernie Ford, Dinah Shore and Ed Sullivan.
Gisele MacKenzie was also a true Canadian sweetheart because she was born in Winnipeg and studied music in Toronto before becoming successful in the U.S.
In 1960 on the Perry Como Show, she performed a tongue-in-cheek salute to her hometown of Winnipeg. Every stupid stereotype about the Great White North was thoroughly milked -- endless winter, freezing cold, dogsledding, Indians, Inuit and dancing Mounties. The result is hilarious, I think. It is truly the cheesiest of cheesy tributes.
Unfortunately, YouTube won't let me embed the short video but you can watch it by clicking here.
Enjoy!
Posted by Debra She Who Seeks at 05:30

I remember her. She was one of my grandma's favorites.
Mary

I never thought I would hear Winnipeg and Staten Island in the same song. I shook two legs!

Love it! I've always had a fondness for Winnipeg because when I was a young hippie type driving to Vancouver in an old van with every other kid East of Fort Frances, some dentist in Winnipeg pulled my friend's tooth out for free. How's that for a warm & fuzzy memory of Winnipeg?

~well i know how to come by for a visit now...i can borrow steal or beg to get to winnipeg! love the snow girl outfits! wishing you and yours a wonderful weekend...much love light and blessings~

Hello my silly friend...can't wait to check out the video...and no I don't shower with my camera, but I do occasionally sit on the closed lid of the commode to snap a photo...I'm a little quirky...but hey, the way the light was shining through that steamy window was too amazing to ignore!!!

I've never heard of her before. What a voice and looker :) Loved the RCMP's chiming in!

beautiful, I remember my mum speaking of her, I love the mounties too!

I've never heard of her, but boy can she sing! She was very talented, and a real looker, too. But then we're all beautiful here in Canada, aren't we? :)

Never heard of her...a bit before my time. She certainly knows how to make an entrance though!

That was great! "eating whale blubber all night long"! LOL

that was hllarious watching her with good ole Perry. She must have been a real hoot to know : ) Mis. MacKenzie

Why yes Debz I remember Gisele MacKenzie very well from our Jack Benny days!!!!! LOL! Thanks for the clip I loved it!!!!

I need one of those outfits!

Wow so talented and what a figure. I had never heard of her before so after the video finished I watched her sing 12th of Never, and that made me cry! lol

of course I remember her..I loved her..and love that song..

She kind of reminds me of Imogene Coca. I know. Weird.

Hi Debra, this is not a comment on your blog post; I was hoping to find an email address for you on your blog. Just wanted to thank you privately for your kind words of condolence. Means a lot. Thanks! Love, Robin.

And here I thought American TV only got embarrassing after the Gong Show and The Jersey Shore.
But, I have to ask: why no mention of hockey?

I do not remember her but fortunately there is videos

That was some cheesy fun! And guess what--my word verification for this comment is "hosed". How appropriate!

What a gal! Gisele, I remember her well! Another GREAT from the Peg!