Chief Mouser to the Cabinet Office

Yesterday's post dealt with Canada's Parliament Hill cats. But the British also have a long history of parliamentary cats. 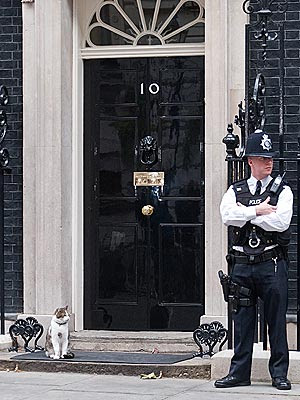 The home of Britain's Prime Minister at 10 Downing Street, London is guarded at all times not only by the Police but also by the Chief Mouser to the Cabinet Office. This tradition apparently stretches back for decades, if not centuries.

The current Chief Mouser is Larry, a young rescue cat from the Battersea Dogs and Cats Home. He has been on the job for about a year now. He stands nobly on guard against rats, mice and other vermin. Doesn't he look positively Churchillian in this official portrait? 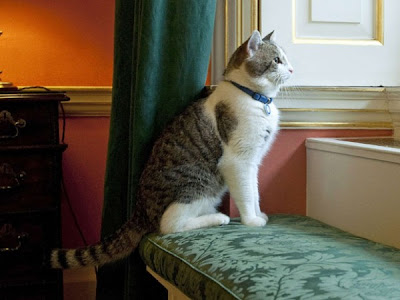 Here's an action shot of Larry on patrol up and down the stairs of 10 Downing Street. He is a fierce mouser. 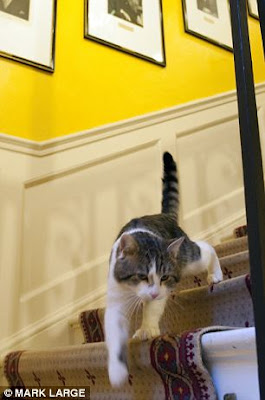 Sometimes Larry gets to meet famous people. But he remains unimpressed by them, as cats always do. Larry has been known to claw members of the press. 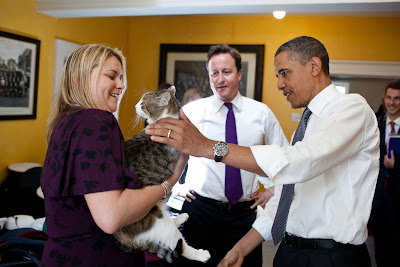 On the day of the Royal Wedding last April, Larry was decked out in a suitably patriotic bow to honour William and Kate. 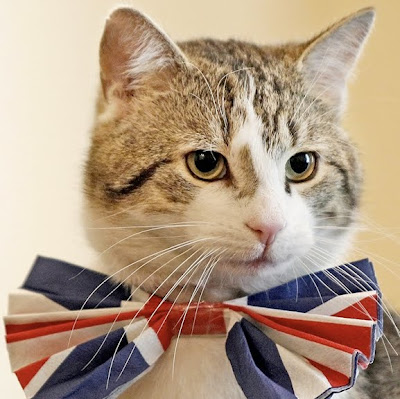 A Chief Mouser usually serves several Prime Ministers over the years and stays at 10 Downing Street while different political administrations come and go. The cat is not a personal pet of the Prime Minister but is a career civil servant.

I wouldn't want to be the one having to put the bowtie on Larry...

I'd vote for him at the elections any time. Serbian president Boris Tadic, also has a cat in his cabinet :) and the Belgrade mayor has a pigeon in his office :)

That's what I need Larry because Stinky my cat has been a bit slack lately! lol.

Boy it sounds like it's a cats life! LOL

And I am sure Larry keeps his political opinions to himself.

Larry is very handsome! But then...I've always had a thing for British guys.

wow, I never knew about, what a life this cat has,, if he could only talk.

he is very handsome

What a distinguished Mouser! A quite handsome chap!
And an interesting post. Thanks!

right on Larry!....hope the mice respect his high position in life!

Wow! That cat has a higher class job then me!

larry is a looker!

In my next life I'd love to come back as a cat... I wonder if Larry is declawed??

Larry is a handsome kitty, although he doesn't look very happy to be wearing that bow tie. Haha!

Larry the cat! Love it!

Look out for Larry... I loved this story
Happy LeAp year ,

I love this. And I love Larry!

Oh he is a handsome lad! I hope he retires with a big pension and plenty of perks!

Larry is a real handsome dude! I've no doubt he runs the show at his place. What cat doesn't?

Hurray for Larry! I think he looks Iron Ladyish at times!

how can you not love a people that has a chief mouser..? hip hip hooray.

Awww! That is awesome! I have cats on my desk right now actually.

The picture of the cat on the table is so funny. Cats really don't give a shit, do they?

Oh oh oh he looks like my William..how fun is that!!

What a great job!

This is one special cat

all 'leisure suit' larrys are the same :P

Hi.. my name is Chris Montgomery and I am the photographer that owns full copyright of this photo of Larry the Cat that I took inside Downing Street. I request that you kindly remove my photo from your website as you do not have permission to use it.

It was part of this series that I shot as official photographer for Downing Street the day Larry moved in.

Here is part of the series on my website:

The image use is managed on license by image agency ‘Rex Features’ who I am represented by.