Shortly after we returned home from Mexico, I woke up one morning with a burning and itchy sensation on my arm. My howling wolf tattoo, which the night before had been almost faded out, was now a raised angry red welt! 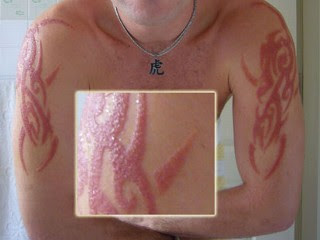 It took two doctors and a dermatologist to find the correct ointment to make the welt go down and the itchiness stop. I learned that my skin's reaction is called "allergic contact dermatitis." It was caused by a black dye that had been added to the henna to make the tattoo darker and longer lasting. In Canada, the United States and Europe, this particular dye has been banned from use for many years. But in unregulated developing countries like Mexico, it is still commonly used.

The pink welt of my temporary tattoo lasted for a couple of months before it was completely gone.

Tomorrow: I turn my pain into poetry.

We don't realize that all countries are not like ours...

No more out of country tattoos...

More tatoo for your buck! Wow, good story, I would have gone for it too. After we came back from Mexico I couldn't donate blood for a year, because we hiked through the forest off the compound.

see! see! Thats why you don't do these things in other countries!!! I tell my kids this, they want me to get a tattoo so bad,,Oh you poor woman, thats horrible, I have had contact dermatitis several times and its a while healing and goes deep sometimes, I can't wait to read the peom!

I'm so allergic to everything I'm awaiting my bubble. Did they put you on steroids that turned you into the Incredible Hulk?

Jeesh, Debra. That must have been uncomfortable. Nothing worse than an itch that doesn't go away, eh? Your lesson learned is mine too. No more Mexican tatoos for me!

I'd rather be educated rather than live and learn on a trial by error basis. But then again, how the hell you supposed to know what's in the ink?

OW!! Was this the end of your tattoo explorations?

I don't think that bastard is poor :) I think he wanted it to be like welts. People do that, use burning things to have such weird tattoos, and you have those people who put object under their skin to get something even crazier. Freaks.

Yikes, I can only imagine what kind of a mess you'd have found yourself in if you'd actually gotten the real deal and found out you were allergic to one of the inks used.

Frightening!!! And probably very uncomfortable. I've always been too scared of needles to get a tatoo.
Mary

Now that was scary!!! I've never heard of that before... They tell you not to drink the water, but no mention of that!!! yuk...

I have six tatt.s and if the welts and scratchiness were bothering me, I'd freak out…Good job for keeping calm and carrying on despite the fear ; )

I was in Walmart the other day and there was a lady in there talking to someone who was ahead of me in line. They had just gotten back from Mexico where there little boy took a picture with a monkey. Well, now he has a weird skin thing on his hand (red, swollen) where the monkey touched him and has to go to a dermatologist. Scary stuff!

Well, this makes me feel a little better at the fact that I cannot travel... Man, you figure you are not having needles stuck into you, just getting a henna tatoo (Am I right in that?) and this happens?

I got contact dermatitis the day after a back operation--we found out I was allergic to heavy duty tape! My WHOLE Back turned red and swollen.

So this must have been simply awful for you. I was luckier because they pumped me full of benadryl and such, and it was gone in three days. MONTHS?

pain and poetry...arm in arm. glad you are feeling better now.

Wow, that is terrible. That settles it; I can resist the "itch" to get a tat!!

Ouch! You poor thing. What a freaky thing too. I didn't know about the ink thing added to henna in some places. Now, I do.

I can feel that itch! Glad they found a treatment. Wonder if this happens to a lot of people who visit there and get henna tattoos?

interesting! i have a bunch of tats and the second one i got, almost 25 years ago, occasionally itches.

I look forward to you turning your pain into poetry!

I'm so sorry you were allergic to your temporary tattoo. Ouchy! The welt thing must have been painful.

Youch! I'm glad you finally healed up. A real tattoo probably would have caused less pain:( What an awful thing to have to experience.

pain into poetry .... lovely words for a terrible ordeal. Oh my stars....ouch to the oh hell. Friend did the same thing, had the same result....it was painful to watch her suffer with the damnable thing. So sorry. Glad you are past it now.

Ack! That's horrible. Thank goodness it was temporary and you healed!

Definitely going to avoid those "temporary" tattoos! Ouch! I'll bet you were howling along with your wolf.

Wow..what a tale..hope you feel better now! Gorgeous tattoo by the way! and cannot wait to hear your poetry!! poetry is pain..beautful pain!
Victoria

dang..that sucks..and that's dangerous too..sigh*..never know what your going to get in a foreign country.

Wow, yeah...I've never heard of regular henna causing trouble, but it can get nasty when you start adding unnecessary ingredients. My sympathies that you didn't know that at the time.

OUCH! Wow! A lesson learned! And Thank You for sharing that lesson with us! :0)