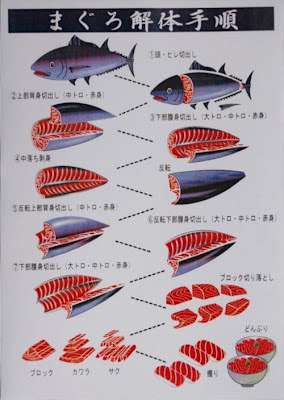 Because we were on a bus tour with over 60 people, we ate at a LOT of buffets -- it's the most efficient way to get large groups fed and watered quickly. The buffets usually featured both Japanese and Western food. The food was okay although it often suffered from being lukewarm/cold, which is a common problem with buffets. But we also had some set meals prepared for us at various restaurants and banquet facilities and those meals were usually much better.

The meals frequently featured fish, seafood, sushi, sashimi, etc. which everyone enjoyed a lot. I'm not a fish or seafood fancier so I often ate with the vegetarians, vegans and allergic people. We had some interesting tofu dishes, like tofu squares topped with a sweetish miso paste that I liked very much.

My Rare One and I eat at a lot of Japanese restaurants here at home, so we were pretty familiar with most of what we were served in Japan. But even so, there were a few new things to try -- usually involving strange vegetables, seaweed and odd flavours.

Stay tuned for a few posts about some of the best things that we ate in Japan.

I would have been eating right along with you. The only seafood I eat is tunafish.
Mary

I too have a problem eating fish, and I cannot bear to see a full fish on a plate, with head and tail..oh ick and gag! I will be interested, though in reading about your culinary experiences in Japan.

I can't wait to see what you ate in Japan. My sister was there for a year modelling 20 years ago and she described eating on a low budget in Tokyo. Not fun.

I'm not a huge seafood eater, but I do enjoy some types; it all depends on what it is -- and how it looks! I really love buffets because you can pick and choose what you like, and be able to try tiny morsels of food you might not otherwise ever taste. Of course, if it's not at the right temperature, it's not that tasty.

Plowing Through Life (Martha) said...
This comment has been removed by the author.
Thursday, May 17, 2012

I'm not a big fan of fish, either! Though I do know that it is very good for a person. Looking forward to more food posts. :0)

Love Japanese food. I bet you had some amazing treats!

That poster is enough to turn anyone off fish, lol!! Looking forward to the rest of your food posts.

This post is making me hungry. Because I DO like seafood. If it's in the ocean, I'll eat it. Killer whale? Give me a harpoon and an afternoon, I'll eat it, God willing.

I used to love eating fish, but things changed for me since then.

Do you ever wonder just how hungry the first person who ate some of that stuff really was? eels! goose barnacles! dancing icefish! I would stick with tofu too. :>)

Oh yummy. Love fish and all their friends... Tofu is good too.

I love seafood because I grew up on the coast, but something tells me there's a big difference between American seafood and Japanese seafood....

It's so interesting and fun trying new foods from far away places.

I love most fish, just not raw. Not a sushi lover at all. I would be eating vegetarian right there with you!

Sounds like HEAVEN to me! I love Japanese food and am willing to try anything......the more raw, the better!
Looking forward to'best things' list.

a lifelong seafood aficionado, the only ones i refuse to eat are those in the poisonous, tetraondontidae family, aka puffer fish.

"Tetraodontidae is a family of primarily marine, and estuarine fish, of the Tetraodontiformes order.

"They are morphologically similar to the closely related porcupinefish, which have large external spines (unlike the thinner, hidden spines of Tetraodontidae, which are only visible when the fish has puffed up).

"The scientific name refers to the four large teeth, fused into an upper and lower plate, which are used for crushing the shells of crustaceans and mollusks, their natural prey.

"Pufferfish are generally believed to be the second–most poisonous vertebrates in the world, after the golden poison frog.

"Certain internal organs, such as liver, and sometimes the skin, are highly toxic to most animals when eaten; nevertheless, the meat of some species is considered a delicacy in Japan (as 河豚, pronounced as fugu), Korea (as bok), and China (as 河豚 hétún) when prepared by chefs who know which part is safe to eat and in what quantity.

"The Tetraodontidae contain at least 120 species of puffers in 19 genera.

"They are most diverse in the tropics, relatively uncommon in the temperate zone, and completely absent from cold waters.

"They are typically small to medium in size, although a few species can reach lengths of greater than 100 centimetres (39 in)."

Well Debra, if you went to japan and weren't intending to eat fish, you oviously went for the ... history? climate? Can't wait to find out if you two stayed in one of those Japanese hotels that rent rooms out that are the size of a horizontal closet.

I can't wait to go to Japan some day

I love all of the fish..but I hate tofu..maybe I'm more redneck than I thought.

I envy you. I have always wanted to go to Japan. I find their culture fascinating.

I'm not really into fish either. Your picture of the fish reminded me of a business dinner I went to with my husband, where we both had to eat raw tuna....it wasn't that bad!

Food is a big part of travelling isn't it - it really reflects the culture of a place.