Riverdale is a charming neighbourhood down in Edmonton's river valley. Originally a working class part of the city, it has been undergoing gentrification for the past few years. On the playground of Riverdale Elementary School, some of its creative citizens have installed a Cretan-style labyrinth made out of inlaid turf stones. 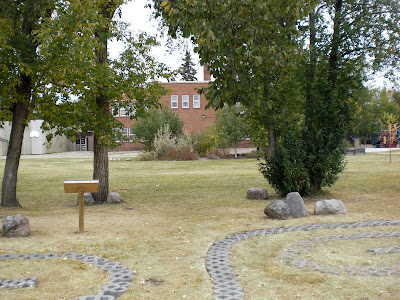 The labyrinth was first constructed in 2006 using only natural plants and grasses for the unicursal walls. But by 2009, it had become overgrown with vegetation and was difficult to use. So the labyrinth walls were switched to more permanent turf stones. The stones are flush to the ground for easy mowing. A large rock marks the centre of the labyrinth. 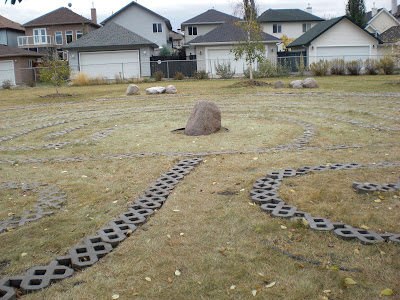 I visited this labyrinth in the autumn of 2011 when it had just been freshly mowed. The foliage of its nearby little tree was a glorious yellow. 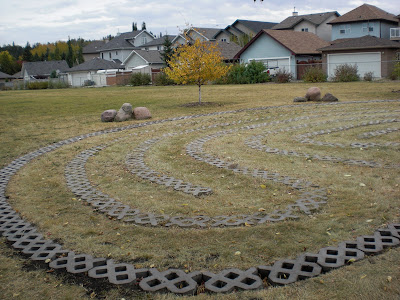 While I was walking the labyrinth, a large vee of Canada geese flew by overhead, honking as they headed south for the winter. 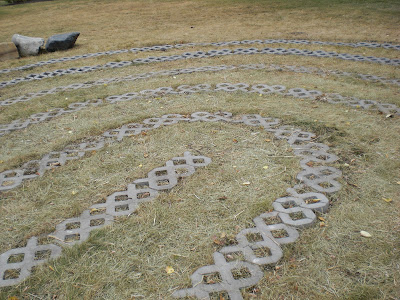 This labyrinth was designed by Sheryl Ackerman, the woman who helped create my favourite Edmonton labyrinth as well as the first labyrinth I ever walked in Manitoba. A team of dedicated community volunteers built and maintain the labyrinth. Well done, everyone!

Oh, that's lovely. I wish we had things like this around here. Your town is very special.
Mary

that is amazing, a work of art!

You know, there are no labyrinths in my area (that I know of). You are lucky to be able to find labyrinths all over Canada.

That is beautiful! My next labyrinth walk, hopefully, will be when I visit west texas the first week of June. I hope they have one there. I have to get on the labyrinth locator website to see where one is located. I will be housesitting in San Angelo with a friend. It's a very artsy community and look forward to the visit. Have a great day.

Oh this is so great. I love the blocks they used....but I have shared with you in the past I just love to walk labyrinths and am lucky enough to have three in this area, 4 if you count the one in Santa Fe.
The Canada geese fly over sounds cool. This weekend's fishing expo included several die hard Canada geese who don't leave but fly and fuss and were very vocal.
great photos of a great place, Oma Linda

I like the use of the turf stones. A wonderful design.

Wow! That is so pretty!

Now that is something that I wish we'd had in some of the playgrounds of the schools I taught in. I think the kids would have taken to it instinctively.

What a great idea to do it on the School grounds. To give the children a chance to learn and to use it and to bring the neighborhood into the energy of the school. Very nice!

The lay out of that labyrinth is the exact same as the one on that rock from a thousand or so years ago! Its on the wiki page! (funny thing I was just reading up on labyrinths two days ago!)

What a good use of this space, Debra! WOnder if the school kids use it at all? Start em young, I say!

That is really cool. Creative minds at work here.

That is so darn cool. I want one at our local park too! :)

I think that one is my favorite yet.

I had the labyrinth/maze argument today and thought of you. I think I'll go exploring next weekend ;-)

What a beauty (also enjoyed the links)! Wish we had some here but quite enjoy when you share those around you.

I've said it before, but I'll say it again: I love how you've found these labyrinths and share them with us. Each time I'm amazed at what is so close to home.