No Purrs for Putin But Meows for Medvedev 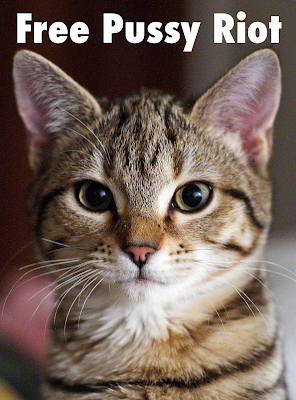 Got another email today from Political Prisoner #1136, otherwise known as my cat Her Royal Highness. In case you missed her first email and are wondering WTF is going on, please click here.

Hello, human. Please say a big THANK YOU for me to all the cats who have written to Amnesty International on behalf of Pussy Riot and me while we are UNJUSTLY IMPRISONED in this Russian jail. Their letter-writing campaign has attracted some BIG-TIME media coverage for our cause! 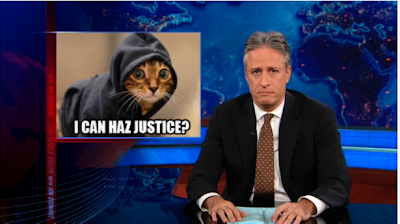 Lots of artists, musicians and politicians have spoken up on our behalf too. Of course, not EVERY supporter is necessarily clear on the issues . . . . 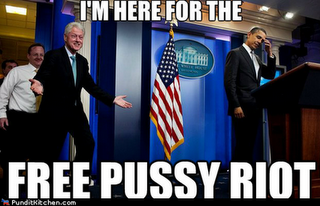 Putin's cat Mr. Whiskervitch has been busy mobilizing all the felines of the former Soviet Union too. Soon we will REWRITE who controls this land! 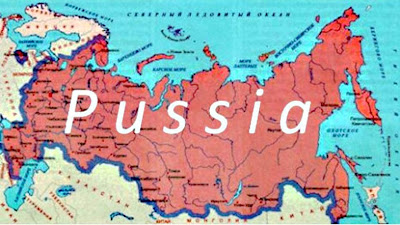 Our appeal is being heard by the Russian court on October 1st and there is some LIGHT at the end of the tunnel! Russia's Prime Minister, Dmitry Medvedev, has publicly said that we should be RELEASED and given suspended sentences instead of being kept in jail! Hopefully the Russian court will get the HINT and follow his suggestion.

Keep your toes, fingers and paws crossed for us that we will soon be FREE!

This is flippin funny!

This could only happen to Her Royal Highness. LOL!!!
Mary

that last picture is rather offensive, Debs.

Ahahhahahaha! Of course Bill is there! ahahahhah! You're killin' me Debra!

Love the one with Clinton, too funny. Hang in there, Ms HRH, we miss you and are hoping you are getting a fair portion of sardines.

Seriously, though Pussy Riot is a bad joke. I'd like a look at their financing, as well.

Glad to hear that a review is upcoming! And I do believe that the world would probably be much better off if the Cats of the World were in charge! Except, I'm not real fond of eating fish....

Love the kitty in the hoodie- so sad and scared looking.

I love the one with Clinton! =)

that pic of Clinton got an out loud laugh. and look at Obama! he's got that 'this can't be good' expression.
too funny.

Oh YRH, you're so brave and doing such important work for kitties all over the place by standing up for what's right. We're still holding a candle vigil for you, comrade!

That was fantastic!! Free the Pussies!!!!

Man,that cat of yours sure does live the life!

OMG Debra, I have this entire thread on my facebook about them. FREE PUSSY RIOT is right!

all praise the kittens...

OMG! While I am totally outraged at the injustice of this, I nearly peed my pants laughing at the Clinton cartoon!

Har har har...I love the one with Clinton!! Boy, HRH sure does live an exciting and adventure-filled life :)

HRH, I don't want to sound too forward or inappropriate... oh that's so much crap, I LOVE sounding forward and mildly inappropriate, so I will say that you are the first being who looks hot on her mugshot. How do you do it? Maybe, after your political incarceration, you can get a reality show doing makeovers for all the wrongfully imprisoned individuals, so that they can look just as amazing when they get out and meet their love ones.

I don't care much for reality TV, but I would watch your show all the time ;-)

oh my gosh this is priceless!!

This is bloody brilliant. An excellent spoof of current events.

Free pusst riot? This sounds like it might be trouble. Is she sure she isn't over her whiskers?

This is a riot, a Laugh riot! Let's hope this doesn't start some sort of international incident! By the way, why does your cat look different in every post? Is she in disguise? I can't let my cats see this or they will want to get in on this too. Once they travel, you can't keep them home (as you well know)!

"She Who Seeks" has been included in the Sites To See for this week. I hope this helps to point many new visitors in your direction.

I'd rather the Russians be in charge that Pussies...they are lethal.

I really hope they do get released! Debra, you have a way of putting things together! Thanks for the smile and laugh ;o)

Oh Bill. I do miss you. Especially Darryl Hammond's SNL version of you.

Hang in there HRH - with any luck, you and Pussy Riot will be out in no time!

Now I know where I'm going on my next trip!

Bill really is the best.