Where, Oh Where is HRH?

It's been over 2 weeks since the Cat Olympics ended in London and yet my cat Her Royal Highness has not returned home. I've been worried sick but today an email from her finally arrived --

Hello, human. You'd better sit down before reading this. You won't BELIEVE where I am at the moment. Right after the Cat Olympics ended, news reached us CATletes about misbehaving cats being PERSECUTED in Russia. So in defence of my feline kind, I headed to the former Soviet Union to see what I could do to help. Wouldn't you???

Turns out that the "Pussy Riot" we had heard about is really a feminist punk rock band who sang a song in public dissing Putin. And they got ARRESTED for it! 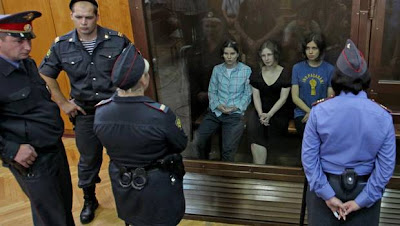 AND I DID TOO when I joined a protest outside the courtroom! The Pussy Riot girls and I all got sentenced to 2 years in prison. IT'S AN OUTRAGEOUS TRAVESTY OF JUSTICE! But luckily, I have friends in high places. High places indeed. 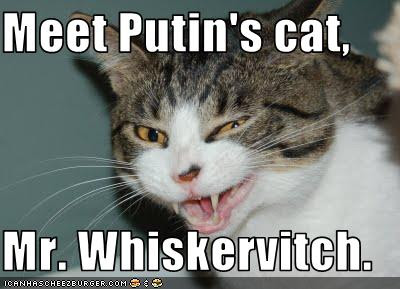 Mr. Whiskervitch, who I befriended at the Cat Olympics, is working hard to convince his human to release us all from jail. He is going to crap in Putin's shoes every morning for as long as it takes until the message gets through. But secretly, I have my doubts whether Putin will break. He IS a former KGB agent, after all. 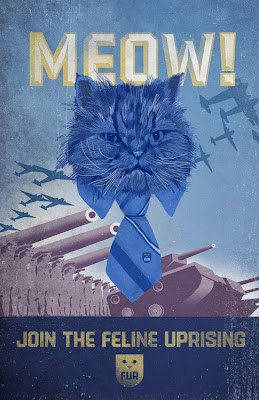 So in case Mr. Whiskervitch fails, I need ALL THE CATS who read this blog to write letters to Amnesty International condemning our imprisonment by the Putin regime and calling for our IMMEDIATE RELEASE! I know I can count on you, feline compatriots!

[Photo of Pussy Riot by photojournalist Mikhail Metzel of AP]

Squeaker, Claud and Martha Stewart are totally outraged by this travesty and are busy writing to Amnesty International as I write.

two of the pussies made a break for it and are on the run! i thought maybe HRH was partying with harry.

Oh my! What an adventurous soul she has... Hoping she is released soon.

Looks like HRH is in some trouble. I'll have to get my lazy-ass cats to write to Amnesty International. May as well earn their keep by doing something worthwhile instead of sleeping all day.

Good Cod, this is indeed a situation, though I have heard Russia has excellent caviar; HRH may want to explore that avenue.

I hope you didn't go quiet, HRH. Actually that picture shows that you didn't, so I'm glad. I also hope you scratched a few idiots during the arrest process.

HRH ~ I am glad to see that you stand up for what is right in this world. Gomez and I shall get right on the letter campaign!

since I don't like when people from the West bend facts, Debs, I just have to say that those girls weren't arrested for singing songs against Putin but for making a disrespectful scandal in an Orthodox church. If someone did something similar in a Catholic church in USA they would be arrested too.

PS hope HRH will get hope safely, although I suspect she's celebrating with some of the hunky golden medal winners.

I will be sending my own paw prints to AI in protest at this outrageous sentence!

Bella, Dezeray, Bartleby, Loki, Max, Merlin, and Izzy will be protesting as well

Putin's cat is hysterical. Hope Miss Minga don't hear about this. She is much too old to travel.
Mary

Wow, HRH just does get around huh? What a brave freedom fighter she is. Sunny Bunny Boo Boo Head and Cybella will join in the letter writing and make the world a safer place for a pussys.

HRH is one brave kitty! Time to wake up the Moob and get him to write to Amnesty International!

Right on HRH!!! Keep up the good work...and bring back some good Russian treats!

Oh YRH, you're such a brave kitty fighting for the justice of kitties everywhere. Of course, we'll take paw to paper so you can return home safely and help others in the process. Just be careful of any caviar you're offered, you never know what they might lace it with.

I guess free speech was one of the things they didn't include when they kicked communism to the curb. Good for you, HRH, for standing up to what's right.

I was wondering where she was. Every family needs a vigilante. Thanks for the update!

Your cat almost makes me rethink the fact that I'm a dog person.

Putin is not worthy of pussy!

big schmuck putin thinks if he pisses around long enough, they'll make him the czar he can't be on his own! GRRRRRRRRRRRRRRRRR

Oh, Putin will break! Never underestimate the persuasive powers of a pissed off cat!

Fuck the shoes, I think pussycat should piss on his head while he sleeps.

I thought the cat my have stayed for the Special Olympics to run against the one-legged South African.

I have quit posting Putin cartoons on my blog till he frees the pussies.

HRH! You could be working with aavaz.org! Better yet, if we all contacted them along with Amnesty international, maybe both of these organizations will help release you and the 'girls'. Putin is getting just a tad POWER CRAZY if you ask me! Are we to just watch him do all this stuff to fellow human beings? NO!

I agree with HRH! You go girl! I am right behind you ;o)

Well this is just a terrible turn of events! **kisses** Deb

Pisi and Squeak are on board. They're disgusted with me. Have a good one!