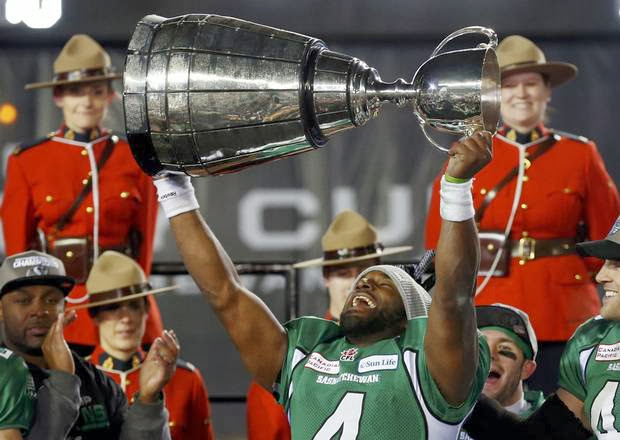 What a great Grey Cup win for the Saskatchewan Roughriders! They dominated throughout the entire game -- final score: 45-23!

The Hamilton Tiger-Cats used up all of their nine lives during the game but never had the lead or were even close. Even Rider fans were showing them who was boss -- 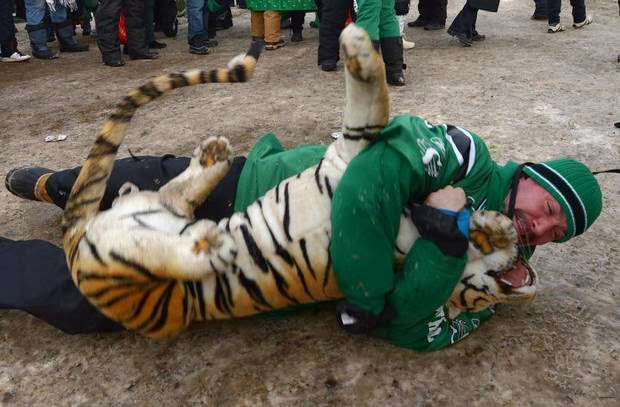 And for those of you doubting whether Regina grocery stores could indeed find watermelons out of season, oh yes they could and did! 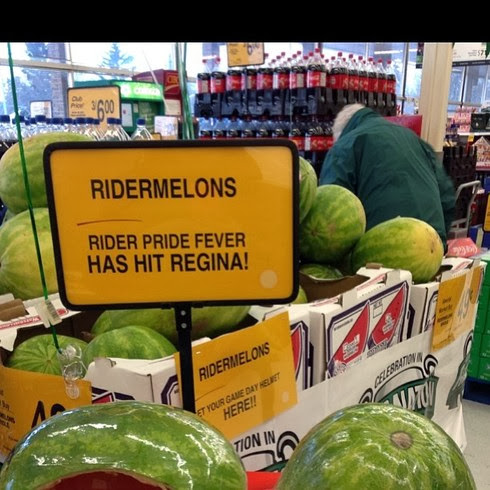 Even though I am totally ignorant of this event, congrats anyway ;-)

oh my gosh that's so funny,

that wasn't a real tiger, was it?

Wow...that photo of the guy wrestling the tiger had me speechless!

I don't know half of the words you just said, but yes, tiger is adorable, and congratulations to your sports team!

Well, they were certainly the better team in the final. The Riders were not my choice, but they deserve congratulations.

The only small consolation I can take out of this season, is that our lowly Edmonton Eskimo's did indeed beet them in their final regular season game. :)

Congrats on the win. So cute, the guy wrestling with the tiger. Made me smile ;)

I'm not a sports fan - but can understand the euphoria !
I lurve those red uniforms by the way !

So glad I didn't have to endure listening to this game! Lol! Being married to a sports nut is hard sometimes. I'm glad Saskatchewan won, I guess. Lol!

Omg! So they actually did have watermelons!?! Congrats on the win, but what sport is this?!? Lol,lol

Melons and tigers, oh my!

Wow, that cat is big. Scary.

Congratulations to the ploughboys, you surely did kick our cherry pickin' butts. This year. But we still luvs ya. Well done!

Really, there are no better fans.

Well, this certainly has to be the most original post of the day :)

I love the look on the player's face in that first photo. Sheer bliss!

I was glad they won. The fans deserve it.

Congrats on the win! They deserved it!

Oh Saskatchewan. My birthright. It's like Saskatchewan is the drunk uncle of all the provinces. And sometimes I really like that.

So glad your team won! Have a great week. Blessings, Martha

Hi Debra......I haven't stopped in as of late..as I have been under the radar so to speak. Been having some health issues and haven't felt much like blogging. I know this comment is about ME and it is a no no in blogland...but just wanted to let you know I have chosen to make my blog a private one. Would still love to hear from you on occasion if you have the time. You know, it is funny, you and Mary from Methodis 123 are really the only two ladies I feel I can be REAL with......strange,,,,huh???? LOL LOL

Please send me an email if you want to stay in touch. My email is josette@cox.net. If you chose not to I will certainly understand as we all have lots going on in our lives.

I don't follow football. No kind of football, soccer even less. And I kind of stopped following hockey when the Habs fans started rioting every time the team win a game. Maybe I should start following football, come to think of it.

Congrats.. I'm very happy for you, but I'm clueless!

I was able to watch a little bit of the game on a channel called "NBCSports" here where I live.

Never seen a game before so it was very interesting to watch.

That is one hell of a big cup Deb.
Watermelons are well and truly in season here. So are mangos.

If BC couldn't have the cup, I'm glad it was Sask!

Yay to the Riders, eh.
The Grey Cup, a Canadian tradition that the rest of the world needs to know about.

CFL, all the way.