Notwithstanding his adamantium claws, Wolverine is not the sharpest knife in the drawer, so to speak. Unfortunately, Professor Charles Xavier figured that out too and gave him his walking papers from the X-Men franchise --

But Wolverine has bounced back. He is nothing if not resourceful in adversity. Wolverine simply changed his name to "Hugh Jackman," brushed up on his song and dance skills and . . . 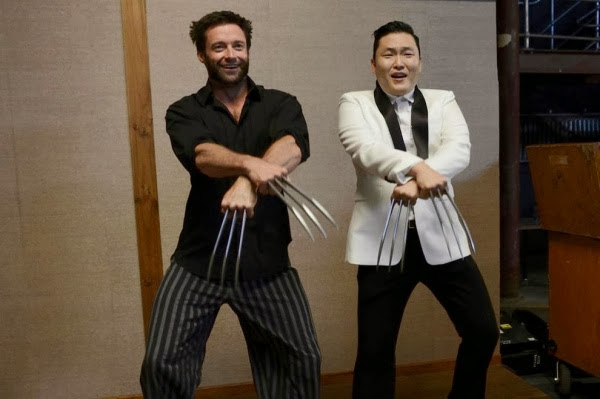 . . . landed a plum role in the blockbuster movie adaptation of Les Miz. 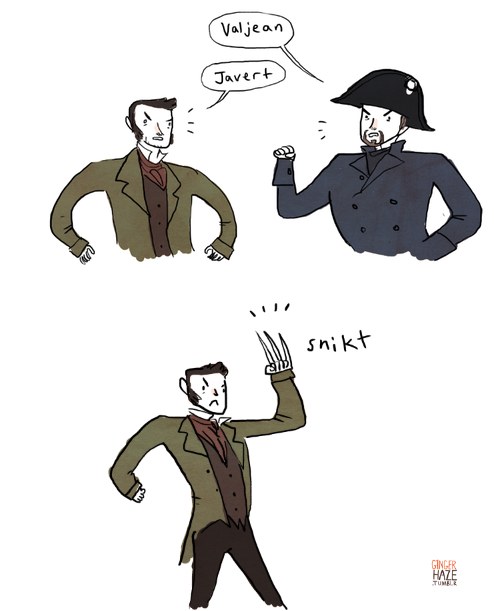 Reviews have been mixed. Alas, no Oscar for our hero! 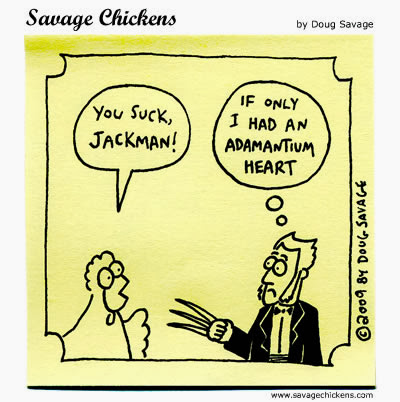 Oh well, things could be worse. At least he's not portraying Van Helsing!

I do prefer Hugh as Helsing :)

Wolverine is my son's favorite of all the X-men. Tried to find a groom for his wedding cake last year that looked like Wolverine....no luck.
Is he trying to do the macarena??? Oh My!!!

Hee hEe. Poor man.
and ~ Oh my savage chickens ...
What the cluck is does this mean for the farm yard.

Oh, Hugh Jackman. Just because you CAN sing doesn't always mean that you SHOULD.

I'd watch him clean the garage, he is very easy on the eyes lol!!

I'm big into Wolverine so I had to skip reading this post in case because I still haven't seen his last movie. Oy.

PS: Laundry is so fun to do now. Amazing how one new little toy, can make a chore, that much MORE fun.

Many people don't even know his real name, only Wolverine :)

And about your comment... You HAVE to read A Street Cat Named Bob. It's not great literature, but it's the cutest thing you'll read this year.

Have to admit it. I am totally lost on this one. Have no idea who Wolverine is....but I know who Hugh Jackman is. Love him.
Mary

AHAHAHAHAAA! Where did he get those pants?

Very funny post. My sister Barb introduced me to Wolverine when I was in Calgary last March. I'll have to send her a link to your post! Have a happy day!

I would like to have those knife hands for cutting up vegetables.

The video clip is hysterical! At least Jackman still has Broadway!

"I can smell really far."

He's just great to look at..

Honestly I see cuter guys in the subway. They don't sing or have claws, but I'm not listening to them or facing them in combat. So Hugh can take a powder so far as I'm concerned.

Mmmm.. Hugh Jackman/Wolverine. Hottie with huge claws. And i'd find him hotter if he'd do my windows.. or something. This post has me cracking up to boot.

That Wolverine video was very funny. I like Wolverine as a character, but yes, he is rather overrated.

OK MS. Jackman, oopps I mean Debra!! I love how your mind works!

Motorcycle made of tubes! LOL! Where did I come from? LOL! Love the video! I love Hugh Jackman! I will take him anywhere! ;o)))

Love Hugh, loved Les Miz, even liked Van Helsing… and aside from that first totally bland Wolverine movie, love him in that role... bring on the next X-Men!

I must use the word "snikt!" in a sentence sometime soon!

The only person I recognise here is PSY. More sad confessions from Joey. :D

What do you have against Van Helsing?? Granted its pretty cheesy, but its still fun!

Savage chicken is not a fan? That's rather sad!