Here's the conclusion of my little travelogue series --

Next, My Rare One and I went to Head-Smashed-In Buffalo Jump, which is located near Fort Macleod. Long before horses and guns were introduced to North America via European contact, buffalo jumps were how native peoples mass-harvested enough buffalo meat and hides to survive the harsh winters. 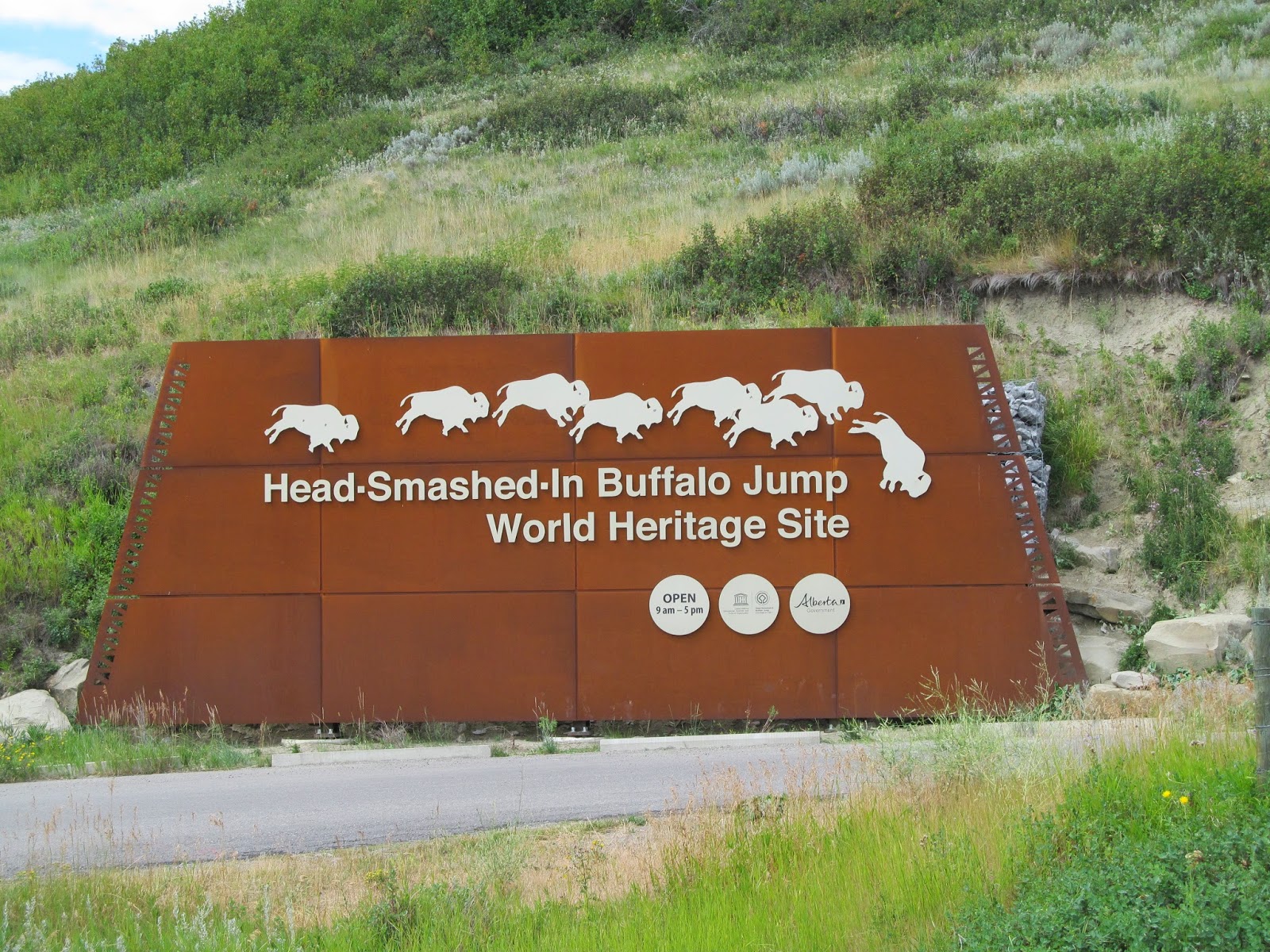 Disguising themselves as buffalo calves and menacing wolves, the First Nations hunters would induce a herd of buffalo to stampede off a high cliff. Not any old cliff would do, though. It had to have a nearby stream (for processing the kill afterwards) and face the right wind direction so the buffalo couldn't detect their hunters by smell. Archaeologists think that the Head-Smashed-In site was one of the best buffalo jumps in the Canadian west. 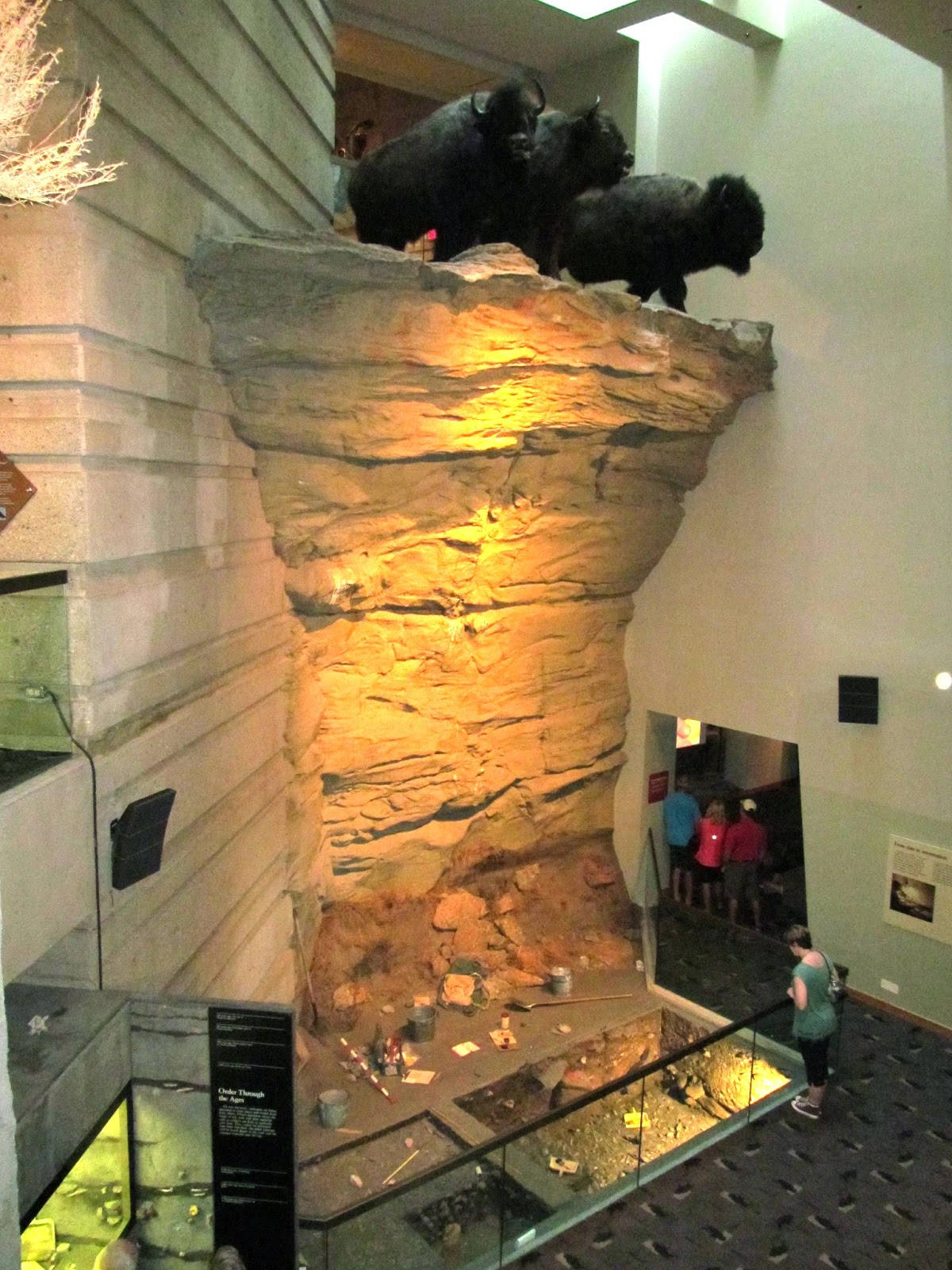 This is the actual buffalo jump site as it appears today -- the steep drop off the cliff has now filled in somewhat as the landscape slowly changed over its 5000 year use as a buffalo jump. 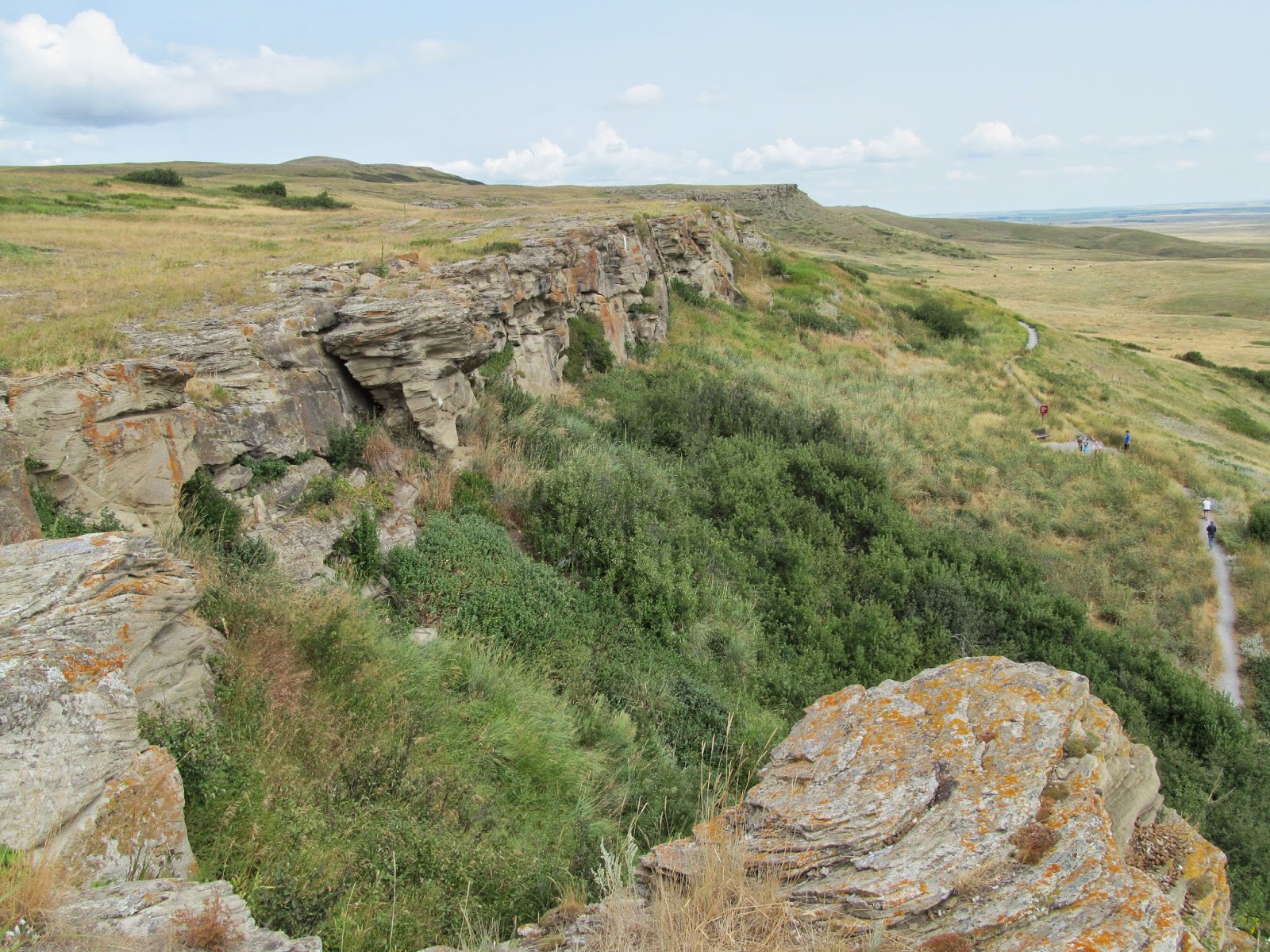 Head-Smashed-In overlooks the flat plains of the Old Man River basin. You can see a modern wind farm in the distance. 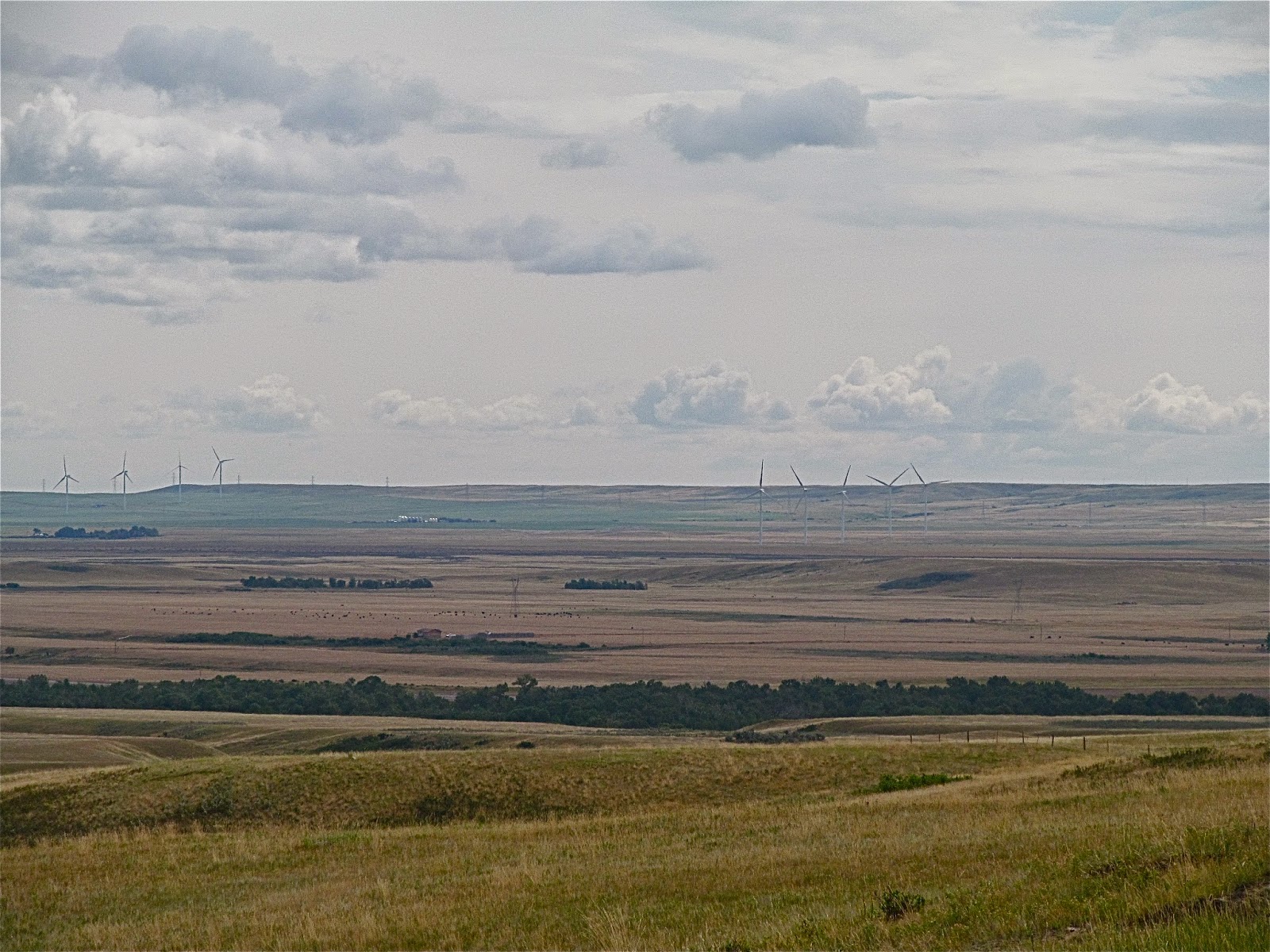 In the late 1800s, the greed and guns of white Canadians and Americans destroyed the huge buffalo herds of the plains in a few short years, devastating the native cultures which depended on the buffalo for survival. First Nations in the west are only now starting to recover. Today, their leaders say that "education is the new buffalo" to provide everything the people need. 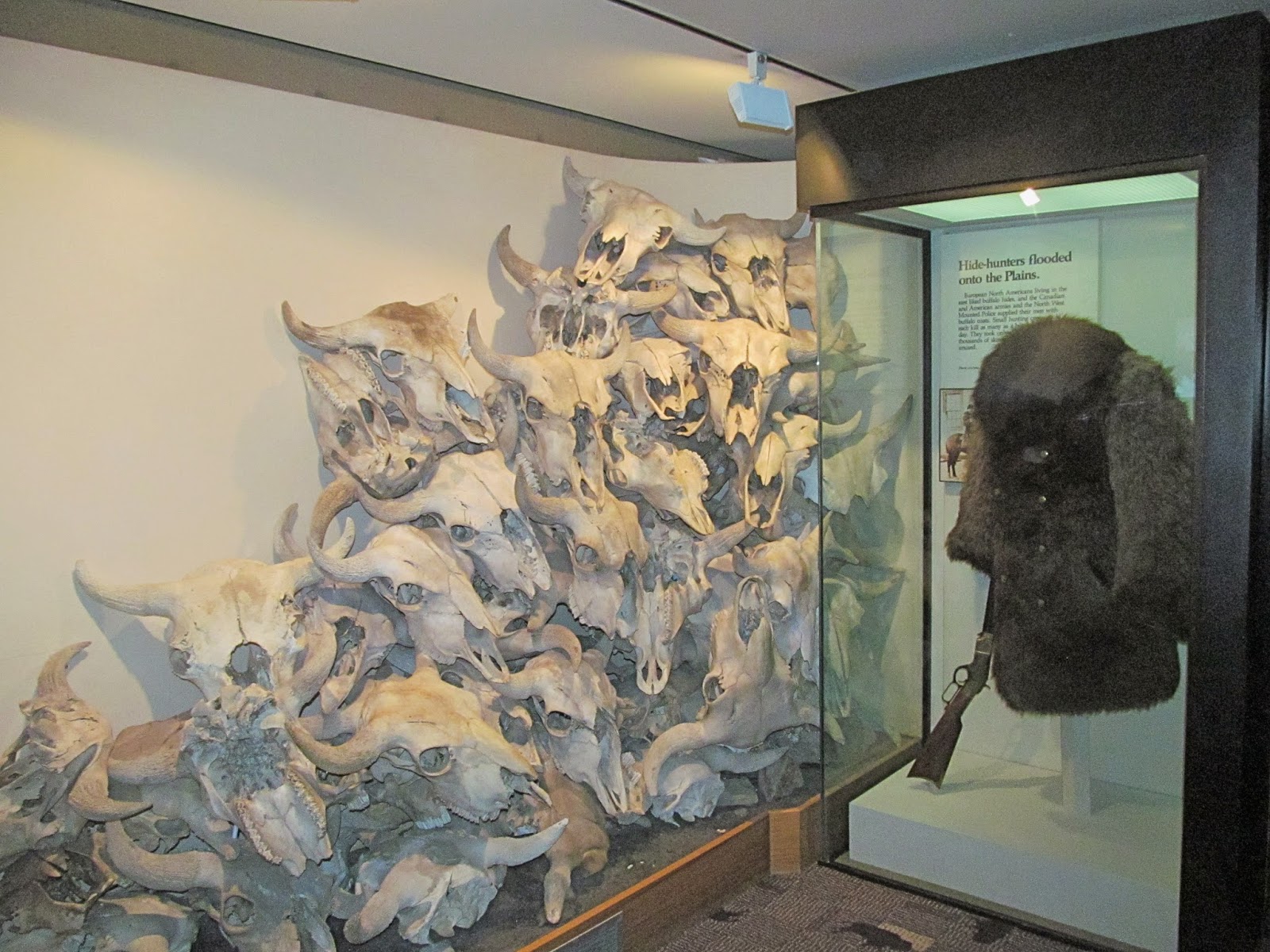 Our final stop was to view the Frank Slide located in the Rocky Mountains' Crowsnest Pass. In 1903, the top peak of the mountain in the photo unexpectedly shifted, broke off and avalanched downwards in the middle of the night, wiping out part of the small mining town of Frank and killing 90 people. You can still clearly see the scars where it slid down the mountain. 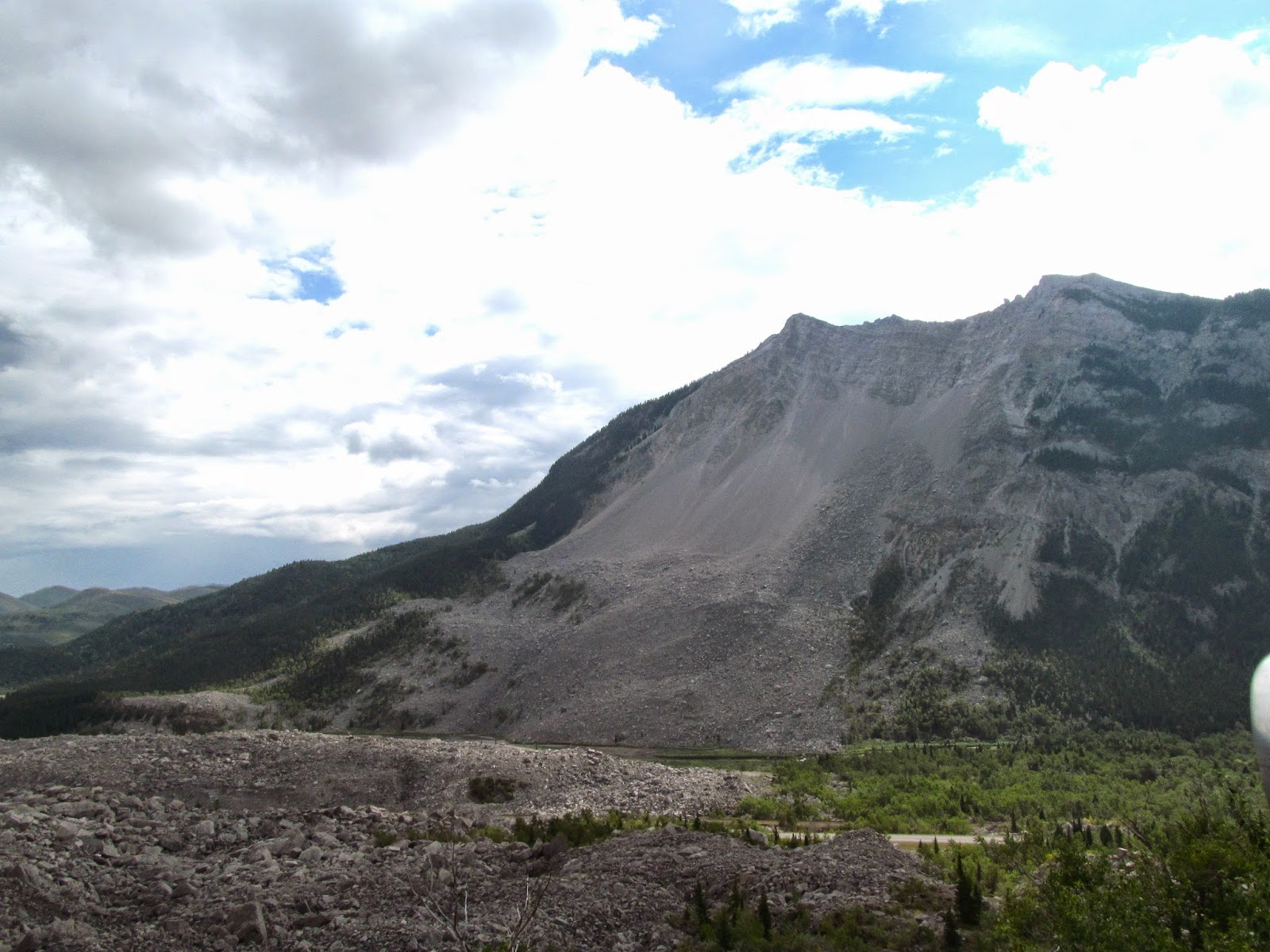 The rocky debris field of the slide's huge "splash zone" (as it's called) is still a stunning sight. Believe me, these photos do not do it justice. 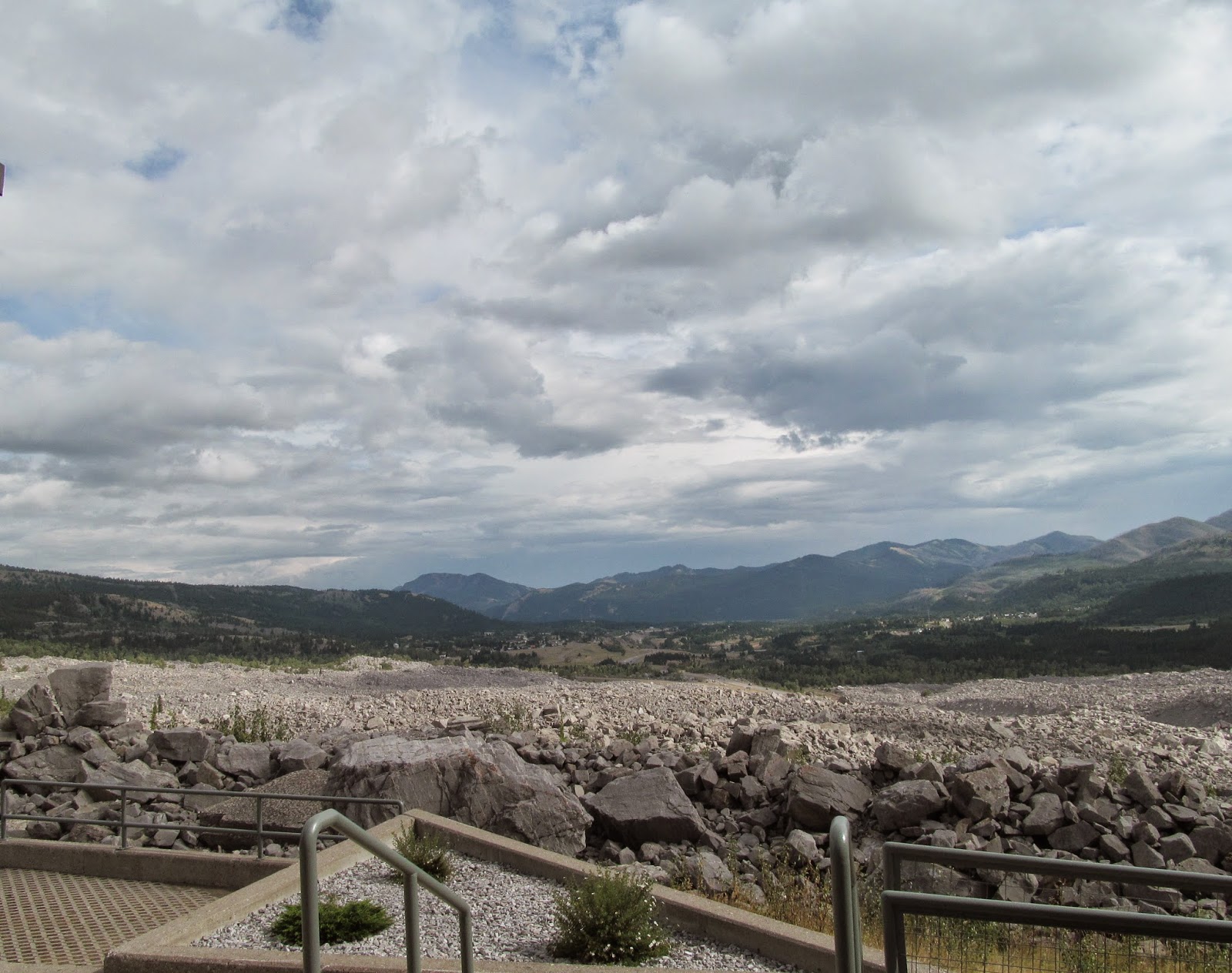 My Rare One and I both enjoy visiting the cultural heritage sites of our region. History is so fascinating because it shows the inventiveness, artistry and indomitable spirit of those who lived before us on this land.

oh, so interesting and absolutely gorgeous !! I will remember these places when I take my "someday" roadtrip through the prairies.

how interesting! the buffalo jump is now more like a buffalo roll. kobe buffalo anyone?

I've never been into history, but your photos and commentary made your trip fascinating. Thanks for sharing!

Wow. Feeling sorry for the buffalo, but understand that crashing over a cliff was pretty ingenious and i imagine that nothing went to waste, which is more than I can say about the European settlers. that was a run-on sentence! :) Lois

OMG it's deeply upsetting just thinking about that savagery

Buffalo IS delicious though! :)
Ah the Frank Slide! There was a back road I used to make out on there! Lol!

Thank you for this awesome series of posts. I have the feeling I'm traveling there through you.

I enjoyed this, Debra! And I've been to both places. HSIBJ is one of my favorite Native American sites, and I often told my third graders about it. What a wonderful trip you had! Take care!

"Head Smashed-In" is both original and not. It's like "snakes on a plane." Let's call it what is is. Funny and odd.

I really like the quote about education having replaced the buffalo.

Have a nice weekend, Debra.

Amazing! This trip has been so much fun! And I have really enjoyed seeing and learning a bit about Canada.

I have heard of the Head-Smashed-In Buffalo Jump. I imagine the Visitor's Center was filled with dioramas and info on the local area and Native Peoples. The dioramas pictured are awe-inspiring.

The area with the wind farm looks a lot like the eastern plains of Colorado.

Wow! is all I can say in regards to the Frank Slide area. The sheer force of Nature never ceases to amaze me. After more than 100 years and the area is still quite evident. Beautiful shot from the top!

Thank you for sharing this adventure with us!

Fascinating info...Very sad about the buffalo..I wonder if that practice has anything to do with the expression "got ya buffaloed"...Beautiful pictures..

Thank you Deb! What a great post! I love seeing Canada through you! I think I know a lot and then I learn something new! Great photos!

That was so interesting! Fascinating hunting details!! Be well!

The landscape is amazing! I love learning about early settlers ways. It is intriguing to think about moving to a new land and figuring out how to survive.

Had to go back and catch up on your trip, but Wow this is an amazing site. Beautiful landscape photos and history lesson combined! I've read about the Native American practice, but have never seen the actual place.

For some reason I can't stop imagining the Buffalo Jump process. It sounds so noisy and bloody in my head...

Wow, I'd never heard of the buffalo jump. Very fascinating! And it is shameful what the white Canadians and Americans did to the buffalo herds. And they called the natives 'savages'. Oh, the irony...

I went to a pow wow at Head Smashed In a few years ago. When those drums started it gave me chills. Loved it!

Frank Slide gives me the chills too, but in a whole different way.

Gorgeous photos! I am glad you can remain BFF's with your rare one...so important! Happy travels!!

I'm so enjoying this..Americans and Canadians have a ugly history to make amends for ..they wiped out millions of native's..sad

I love the pictures of the buffaloes. I saw them in semi-captivity at the Zoo de St-Félicien.

I've never been the Head Smashed In Buffalo Jump. Seriously, I need to go and take my boy one day.

Isn't that the most amazing place? I went there last year. :D

Lovely photos. Hard to look at the buffalo jump though. Poor big, shaggy beasties. Alberta is a very beautiful part of Canada and so thanks for these photos, Debra!

As neat as this looks, I don't think I could survive the road trip there.

Very impressive ! I have seen those buffalo jumps recreated in films but I didn't know you could actually visit the sites.

Loved your photo journal Debra! Beautiful photos and very amusing and informative journalism! Bright blessings to you and your rare one!

There's actually an Old Man River?
I always thought that was just a metaphor.

Those poor buffalo, what a way to go!
I loved this Debra, so informative. Love this part of your vast country.
Di
xoxo

Debra,I love your "RoadTrip" posts. I lived in Calgary for two years. Upon seeing some of these magnificent sights, and sites; I felt such overwhelming pride, and privilege in being Canadian.