INKED! A Tattoo Virgin No More 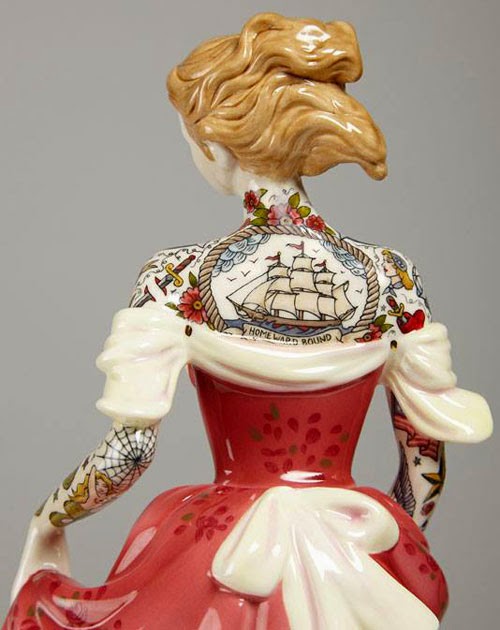 Long-time readers may remember a series of posts I wrote a few years back about my thwarted plans to get a tattoo. Long before tattoos on women were a mainstream fashion, dyke chic meant that every lesbian had to have at least one tat! But like a female Hamlet, I waffled forever over what design I should get. And then when I did finally resolve to get inked for my 40th birthday, I got downsized in government job cuts and prudently decided not to spend the money after all.

After that, the moment simply passed. And then years, many years, passed. The desire to get some ink did not surface again until 2014. I was born in '57 and 2014 was when I turned 57. It was like my friggin year of Harmonic Convergence! And lo, all of a sudden, in a flash of blinding inspiration, I knew exactly what I should get for my tattoo -- a design of great personal significance to me. 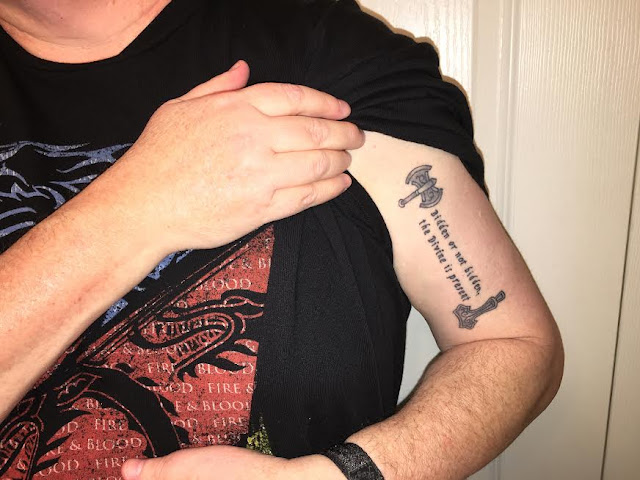 [Photo by My Rare One,
who does not really like tattoos at all
but who has adjusted]

And to answer everyone's inevitable question -- no, it didn't really hurt because modern, high-speed tattooing equipment has eliminated much of the pain. It felt like someone was lightly dragging a hot needle across my skin, that was all. Some mild discomfort, yes, but nothing that I would dignify with the word "pain." Fer chrissakes, I've had menstrual cramps that were a million times more painful than this! Tattooing was nothing by comparison.

So what is the meaning and significance of my tat's design? It's a pagan tattoo honouring the Divine Feminine and the Divine Masculine and which also cites a famous pagan quotation about the nature of the human/Divine relationship. As you can see, I decided not to get a coloured tat but went old school with simple black and grey scale. That's a nod to my father's monochromatic tattoos that I remember so well from childhood onwards.

I'm going to post individually about each element of the design over the next three days. Hey, I waited 57 years to get a tattoo, I damn well intend to milk its blog post potential for all it's worth!

You're so badass, Debs, next stop joining Angels of Hell :)

interesting way to celebrate a birthday.

I am like your rare one in that I am not a tat fan. but hey, if it feels good, do it! I will be interested in reading about your design.

Great post. Look forward to the rest of the story.

Very nice. Congratulations are in order. I always like when someone gets a tattoo of significance to them and that sounds like it was incredibly personal to you, right down to the color of the ink.

I've considered getting a tattoo numerous times but I was never able to commit to a design, so I guess they aren't for me. I do like yours though. I really like that saying too. The divine comes whether you want it to or not.

tattoo always sound some kind of pain and pleasure giving experiment to me ,glad you got what you wished for
have a blessed week ahead dear

Congratulations to you! Excited to hear about the different elements of your tat. :o)

I, like Jeanne, want to hear more on the elements. I've yet to get a tattoo and may not. Dealing with my personality and Fearsome's personality I just don't know if we could take on a third anytime soon.

You succumbed and that is just fine ~~~ I haven't succumbed and I'm 66! Should I or shouldn't ?
Looking frwd to your next posts!!
Milker~~~!

I love the,saying you chose Debs. And proud you took the pain. After all, what are a few pricks?

Great tat, Debra! It was worth the wait. I love that you went old school with the ink and the placement. You've put it on the upper arm, but on the inside rather than in a band around the muscles. Nice! I also love that you put it where you can see it. I'll never understand getting one on your back... when do you ever see it?!?

Looking forward to the further explication.

well fuck...I had given up on ever having another tat but now I want this one..sigh*...this is one great tat.

Well worth the wait! As you grow older and wiser, you pick a more meaningful tattoo. I have always wanted to get one too but it hasn't happened yet. My other half does not care for tats either so he will have to suck it up when the time comes!

great tat!!! tattoos don't hurt anymore? get out! i got one on my butt that just about killed me it hurt so bad. i keep thinking if i get sleeves my age marks won't be noticeable!

BEAUTIFUL ink!!!! Welcome to the inked side of life! I have 6 and let me tell you, they are addictive! :) Can't wait to hear more!!!

I never got one before probably never will

YOU DID IT! 3 cheers for Debra!!
I like it a lot! It is a good start for a magnificent sleeve!!
Your Rare One will hardly notice!!

Fantastic. What a cool tattoo. And I agree with Dezmond about you being so badass. Now all you need is a Harley :)

My younger daughter got a tattoo right after she turned 18 (because I wouldn't sign for her; told her she'd have to make that decision as an adult); such an adventurer that one! Said it hurt quite a bit.

Now I just know you'll be getting some more. :D I don't mind a few tats but I have a tough time seeing beautiful men and women covering themselves from head to toes with them, especially on the face. But each to their own. And I'm quite fond of my bumble bee on my butt. Ha.

Haven't gotten one, and at this point I figure I never will. Yours came out fantastically, though. I always worry I'll ask for something bad ass and end up with something like this.

Congrats, my wife got one at about the same age.
the Ol'Buzzard

Cool! I knew if you did one it wouldn't be some trite pop culture b.s. Milk it for all it's worth. My (formerly awesome) bod is still tattoo free. Maybe next time in Iceland...

My Krav Maga instructor is a big fan of tattoos. He has loads.

Milk away.. hmm that didn't sound right but you know what I mean.....

To be perfectly frank, I have no problems with tats on men or women. My only beef is if they go whole hog by going beyond the individual into the real of sleeves etc., then it becomes just a basic turn-off. But that's me.

Personally, I would like to get one, but due to the fact that I'm a diabetic, I do have be extremely careful about it (infections, etc.). I also have to work on my wife a little bit for permission (hey, she has to live with me) but I'm sure she'll come around in a year or two.

More powers to you and rock on!

I love it! I'm with you - I like gray scale tattoos best. Well, I suppose nobody ever really thought I'd ever get mine done in colour, did they? I'm excited to hear about the meaning behind the tat! :D

P.S. Now I'm sad I gave away my mum's Royal Doulton figurines - I could have tatted them up!

Your Rare One and I must be in agreement on this. I just don't understand the appeal of them. An unusual piece of clothing or accessory makes much more sense to me. I did see a sign for tattoo removal the other day in a nearby town. I think it will be a big business.

So cool Debs! I love it! I can't wait to here more about it! Congrats! I want one so bad! Thanks for sharing about the "pain", or lack of!

I've got three - all dragons. One on each deltoid and another on my right upper back. All were done when I was in a relationship and the Significant Other was watching. Now that she has chosen to move on, while I am not going to get the tattoos removed, I am not planning on getting any more.

I like old school, archaic black/gray tattoos, and I'm guessing that is aligned with the meaning. I shall return to see if I'm guessing correctly.

Oh Debra congratulations, you should celebrate!Loved the tattoo :)
my and my husband are wanting to make tattoos.. from time to time. And as you said time also passes by meanwhile.. so I guess we still have some time to realize our dream. lol

Good for you!!! This is something that I want to do so so badly. You have inspired me :)

Good for you! I only have one but I want another one. It seems that is the way with tattoos.

You're braver than I am, Debra! No tattoos for me, yet; probably never! I've seen some amazing tattoos here in Hawaii; some are beautiful or meaningful, and then there are some where I think "OMG ~ What were they thinking?" Yours is really meaningful and mystic!

Welcome to the Inked ranks, dear Debra! I love the placing, the design and their meaning. Yay!

I caught this series from the most recent to now. Pretty cool though. Thanks for sharing and boogie boogie.