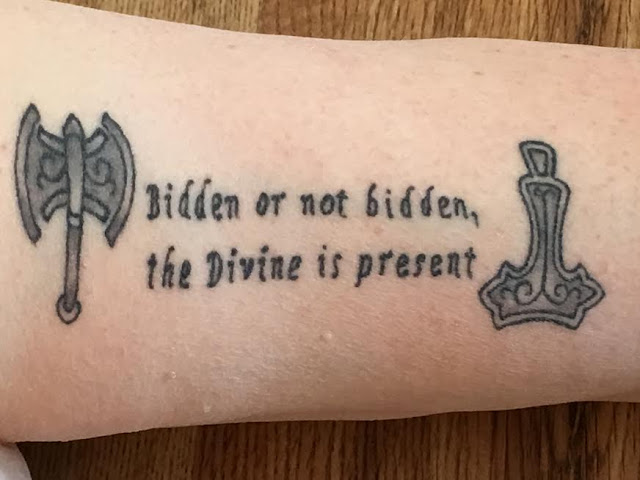 The Divine Feminine is honoured in my tattoo by a Labrys, the ceremonial double-headed axe of the ancient goddess-worshipping Minoan Crete civilization. This immensely old fertility symbol represents the vulva's butterfly-like double labia. The Labrys is so inextricably associated with women that classical Greek, Roman and Western art often portrays it as a favourite battle weapon of the Amazons, the mythical female warriors who fought against patriarchal domination. 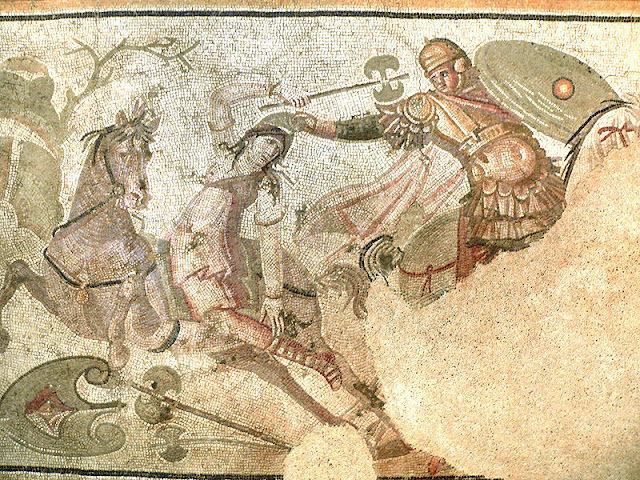 This latter interpretation also led to the Labrys being adopted in the feminist 1970s as the symbol of the Lesbian Nation. The modern Women's Spirituality movement has now revived its original spiritual meaning as well. And, of course, all three movements -- feminism, lesbian rights and women's spirituality -- have been central to my own life.

I am sure that I have seen that Amazonian mosaic in the Louvre!

and I also love my new blog..thank you again.

The only path to heaven is the belief in our lord and savior, Thor God of Thunder

That's really cool! Why that specific location (inside forearm) and not somewhere else? (if I may ask...)

@ Jeanne -- For three reasons, really -- (1) that spot is still a nice unblemished patch of skin (boo to the aging process); (2) I wanted to be able to easily see the tattoo myself; (3) and yet the tat remains private because I always wear a long or medium sleeve on my blouses/t-shirts.

I like that a lot Debra. Oddly enough, I've been thinking about a new tattoo... if I do get one, the labrys may be an element of it.

Or I may go hog wild and have the Copernican solar system done.

Wait what? There's a symbol for double labia? :)
Did it hurt getting the tattoo?

I had never heard of that interpretation of this axe. Pardon the pun but I figured it was useful in battle since it could swing both ways.

Enjoyed this thank you for sharing

I am glad the spirit is still very much alive.

I must say how tasteful your birthday present is. and I never knew all the information you presented here.

Very interesting facts. Happy birthday to you. You said it didn't hurt...
Debra, you are more of a kid than us....LOL

Absolutely fascinating! I love it.

I was unaware of the symbols. Thanks for sharing and I look forward to learning more about Thor's hammer. I do like the tattoo and the meanings it has. Don't know if I'll ever do one, but never say never.

Congratulations! I love it! It's beautiful and meaningful and you! Also I know what you mean about menstrual cramps being so much harder and I totally agree!! Lots and lots of love!

Tattoos....they are a double sided sword for me (but remember, I am an olden lady)....
our son has several but in very good taste...and being a business man, he always is able to cover them when going to a business meeting and etc. I love every single one of his...of course, we all know just about ANYthing a child of ours can do is A.OK.
His sweet wife has a beautiful rose tattoo just above her swimsuit line, in the back...very attractive. Most of the grandgirls have those adorable bellybutton piercings but no tattoos as yet...
The ones that make me sad are on the young people that have them all over their necks, up on their faces...sleeves....I just don't like those at all...and I wonder as they become mothers, daddies, grandparents...will they regret doing it. I'm glad you finally decided on one that has meaning to you.

I really like your tattoo, Debra! There is something about the quote that resonates with me, and I found the information about the symbols fascinating. I want to thank you for reminding me several times that blogging is not a job. That straightened my head out a lot, and I really appreciated your words of wisdom. I think I was approaching too many things as a job. We have been nothing but lazy since we arrived in Honolulu (well except for when I'm at the gym), and I've been loving every minute. Take care!

If I were to get another tat it would be barbed wire around my arm. But I couldn't get a blog post out of that could I? Maybe I need to be more creative.

I had no idea about the double axe. It makes sense. I liked the tat before, but now, with the close up, I like the detail more. By the way, right after, does it itch?

@ strangelynaked (Pickleope) -- yes, there was some slight itching afterwards but all in all, it was fine. I had to keep it covered with some plastic bandage stuff for the first 24 hours (if I remember correctly). Then the skin could be gently washed with scent-free liquid soap.

I've learned something new, thank you!

And now the phrase "double-labia" will stay in my mind for days. Because my mind gets stuck on these things...

I always learn something from your posts...Thanks

Is that the origin of the sexist insult "battle-axe?"

@ Professor Chaos -- Yes, I believe it is. And of course, it usually gets teamed up with the pejorative adjective "old." A charming mixture of ageism and sexism, LOL!

This was interesting but you know, that image of Thor the bride, is still burned into my brain.