The Matzo Ball That Ate Winnipeg

Since it's Hanukkah all this week -- Best Wishes to all who celebrate! -- I thought I'd tell you about the time I attempted to make matzo balls in Winnipeg about 35 years ago. MY WORST COOKING DISASTER EVER!

When I started university, I discovered the joy of eating matzo balls in chicken soup at a local Jewish deli which, alas, subsequently went out of business. (You can read my tribute to that beloved deli here, if you want). Anyway, being in serious matzo ball withdrawal, I decided to try making my own.

How hard could it BE? (said the Anglo-Saxon Gentile) 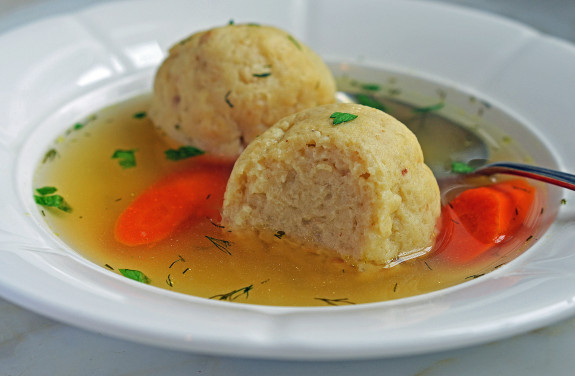 So I purchased a package of matzo ball mix from the grocery store and read the VERY minimalistic "how to" instructions on the back. I mixed the matzo meal with some oil and eggs as directed and brought my biggest pot of water to a boil. Then I formed the dough into balls.

Hmm, how BIG should I make them? The package provided no insight. Since the large matzo balls I'd eaten at the deli were about the size of the ones in the above photo, I made six similarly large matzo balls and put them all in the pot of boiling water.

Now, this is where being a Shiksa proved to be my undoing. I was, in fact, ignorant of a KEY PIECE of cultural knowledge. I'd never actually SEEN anyone make matzo balls before, of course. So HOW was I supposed to know that they SWELL UP LIKE A SONOVABITCH during the cooking process?

My back was to the stove when I heard this odd glub, glub, glub sound. I'll remember that sound as long as I live. It haunts me to this day.

. . . and saw ONE HUGE, FUSED-TOGETHER, POSITIVELY MUTANT MATZO BALL in the process of RISING UP, UP, UP out of the pot and SPILLING OVER the sides! 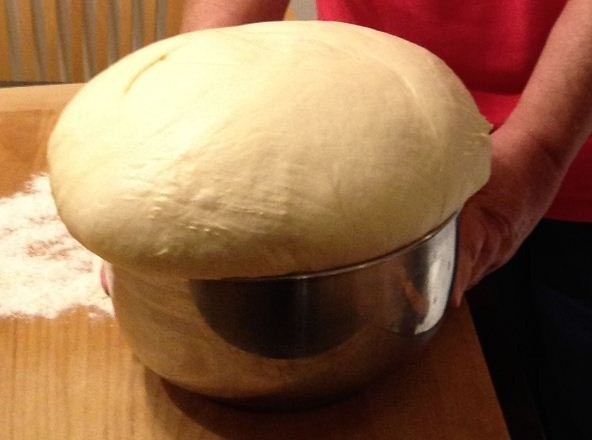 What an unholy MESS it made! I cleaned matzo dough off my stove for DAYS afterwards.

And on top of everything else, I STILL had no matzo balls for my soup! It just added insult to injury.

holy crap! I tried matzo ball soup once - the balls had no flavor and tasted like dried paper. give me noodles in my chicken soup everyday!

What are they made of? Regular flour? I make my soup balls with semolina flour. One eggs, 3-4 tbsp of semolina (or a bit more depending on the egg), some salt and baking soda and in they go into the simmering soup to boil

I've never made them--love them, though--and I'd probably freak out when they started growing!

Thanks for my morning chuckle. I'll be thinking about you when I have matzo ball soup at the local deli! Happy New Year!

Haha! I have not attempted matzo balls before. Since I have made a few ethnic things over the years that were complete failures, I can empathize!

"Slowly I turned..." this whole post is hilarious but I love the Vaudeville shout out.

Instead of water, I use chicken broth in the mix, also finely minced onions and garlic, tastes much better.

You make me laugh out loud! Thank you for the Iife lesson, now WE ALL will think of you when we make PERfect 👌 matsa balls!
Yum! Now I'm Hungary 😍👍🌹👌🇨🇦

Oh my gosh, oh my gosh, I loved this story. And you cracked me up, outloud, no lie when I read, slowly I turned ....

Next time you are in the Peg, let's meet at Oscars. Their matzo ball soup is most delicious!

Oh my, how funny! If I were to write of my worst cooking disasters ever, I would have to think about it, there are just too many! HA!

Tee hee! I was the director of a Jewish preschool many years ago and learn all the prayers, rituals and culture to teach the children.

BAHAHAHA! Thank goodness I had swallowed the sip of tea I just took or else it would have been all over my screen. This was hilarious :)

I've never had them

Wow that one huge matzo ball. Sometimes look esaier than we think.

File this under: Why I Don't Like to Cook. DANGEROUS!!! Who knows what that mutant blob might have done if you hadn't slowly turned...

Hahaha! You are too funny Debra!
How about some "Schwettie Balls"?
Cheers!
Linda :o)

That's so funny. I did exactly the same thing the first time I made them! 4 absolutely giant matzo balls filled the pot! Thanks for the story.

Hahaahaa! I was shouting at you: "No, don't make 'em too big. Oy vey, they grow like sonsovabitches, they do! Don't, do not-!" Understandable mistake, Deb. It's not on the label. I like nice small tight matzah balls, so I haven't had that problem. =)

OH MY! THAT was a lesson learned, I bet, Debra!!
I too LOVE matzo ball soup! Must go to our one and only Jewish deli here in town.

I've made meatballs before and thankfully they don't expand. It's a shame the matzoball wasn't edible. A giant one would have been quite the treat.

A Bubbie would have known exactly what to do with that mix - throw it out and start from scratch!

Though I am reminded of the Italian risotto mix which told you to add a "nut of butter" and a "string of olive oil" - WTF!!!!!!!!!

I am an adept of epic kitchen failures.

I have no idea what these are...but thanks for the tip on them doubling and then some, in size. If I ever learn to make them, they will be tiny. :)
Do u have any idea why Terry closed down his blog.? I went over to wish him a Happy New Year and the blog is closed. Hope he is ok..
Wishing you and all you love a Happy New Year.

I'd have made the same error. It's funny in the re-telling.

Hahaha! You made my night! That is so funny! I've also had a few cooking disasters, who hasn't! Luckily I have Jewish friends who cook, so I get invited to their house and just bring the wine....

LOL!! Really??? I never new this! Thanks for sharing Debra! That would have been such a mess!!!

Hilarious! Surely you can just buy those??? :)

Funniest cooking disaster story I've heard in a long time! Reminds me of the old sci fi movie "The Blob!"

I am reminded of the magic porridge pot! Makes me feel better about my dumplings.