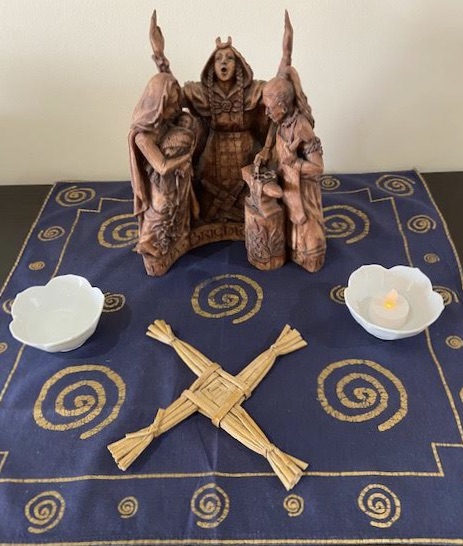 February's full moon altar honours Brigid, the Celtic triple goddess of healing, poetry and skilled metalwork. Her sacred day of Imbolc occurs at the beginning of February as well. Brigid, her lore and her symbols were later incorporated into Christianity as the popular "Saint Brigid."
I bought this wonderful statue of Brigid about 15 years ago at a spirituality store here in Edmonton, a reproduction of a work by Paul Borda of Dryad Design. The blue altar cloth with its golden sacred spirals is meant to honour Brigid's dual role as a Goddess of Sacred Wells and as a Goddess of the Fire of Life and Creativity. These themes are also reflected in the two white lotus bowls containing (on the left) water and (on the right) a votive candle. 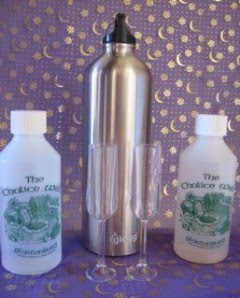 The water used for this month's altar actually did come from a sacred well -- the Lion's Head Well in Chalice Garden at the base of England's Glastonbury Tor -- water which I brought home with me a dozen years ago. If you're interested, you can read about that by clicking here. I still have half a bottle left!
At the front of the altar lies a Brigid's Star (or as it's known by Christians, a Brigid's Cross), traditionally crafted from rushes, its woven centre meant to represent the interconnectedness of all life. I bought this one many years ago at an absolutely exorbitant price from a British import store in West Edmonton Mall.
[First photo © Debra She Who Seeks, February 2021.
Second, unfortunately blurry, photo ©
Debra She Who Seeks, November 2009.
Pixels are so much better now!]
Posted by Debra She Who Seeks at 04:00

The altar looks so peaceful, something we need today.

i love the brigid statue!

I've never heard of any of it! lol. Is Brigid putting both her middle fingers up?

I had no idea that Brigid had all these gifts.

We watch the DaVinci Code again last night. It's been so long since we've seen it, it was full of surprises again.

This is all very interesting, as I have no knowledge of these things. The full moon, incidentally, was spectacularly bright last night. -Jenn

Who knew? St. Brigid (Irish) Catholic Church in Elmwood, CT. was named for a Celtic goddess!

Hello Debra, Brigid must have been the spiritual guide for Madeline Yale Wynne, a late 19th-early 20th century writer and artist (I love her short stories). She was very skilled at metalcrafting and some remarkable specimens of her work can be found on the internet. She married and had children, but then ditched her husband and with her lifelong partner Annie, founded the Deerfield Society for Arts and Crafts.
--Jim

Skilled metalwork, eh? Well, it's always good to have a trade to fall back on, LOL!

I had never heard of Brigid before. Thanks for the information.

That is such a cool alter.

Your post reminded me that I still have a small bottle from the Chalice Well. I need to do a little cleansing, and the water will be perfect.

May the full moon fill you with bright, my dear Debra.

I'm not familiar with either the goddess or the saint, but am always interested in how such concepts make the leap from polytheism to Christianity.

It's always so great to see and learn about beautiful and new things that I'm unfamiliar with here, and greatly appreciated. Sending lots and lots of hugs, RO

I only know 2 Brigids ... and even those names are spelled differently. Anyway ... Brigid 1 I met In nursing school in 1979. Although we now live in different countries, and are still as close as ever. Brigid 2 was a friend of my daughter on Van Island. RIP Brigid 2.

Very interesting. So, there's a Catholic Church not to far from me named St. Brigid. Not being Catholic, I never thought much about the name, but now when I drive past I'll think of your post. Hope you're doing well and staying safe from the Covid and hope that you'll be able to get your shots soon; if you've not already been successful.

You brought home water from Glastonbury? That is not just a wonderful idea but a new life goal. How are you sweet friend?

this is just soooooooo cool

The statue is beautiful and very detailed Debra, and so is your altar of this month. I had never heard of the Brigid's Star/Cross, its meaning is interesting.

She is a dear; she makes my early tomatoes grow.

Lovely statuary and thank you for the information behind the saint.

Incorporated into Christianity...I once heard a marvelous sermon where the priest said that they didn't want to throw the baby out with the bath water and the early Christians worked a lot of what went before along with Christianity. Some of the more conservative folks might not have liked that, they are probably Trump supporters now.

What a lovely altar, Debra! I can feel healing emanations just looking at it. I googled Glastonbury Tor out of curiosity, because I couldn't recall it. What a striking and intriguing site! There is a stone carving believed to be St. Brigid milking a cow. She had a lot of skills! Your post about collecting the water and getting it home safely brought back memories of security checks for me. I especially liked the ceremony you had sharing the sacred water with your drumming/chanting circle. Have a lovely March!

A beautiful altar, Debra. I am super impressed by your bringing home water from the UK. That's a commitment!
When I was in Ireland a few years ago, we visited some sacred wells. I'd like to go back and see more of them. All of the personal items tied to the tree beside the well were quite poignant.

You asked if our latest cases on the island are from the British variant. Testing for the variants is done in Winnipeg so the results aren’t back yet. It is a strong possibility for sure. We had 0 cases today, so that’s hopeful.

I noticed a few others here noticed the "skilled metalwork" mixed into St. Brigid resume. This has me wondering if she was also good at knife/sword fighting.

This is so very interesting; I'm a Brigid fan!

That's a lovely altar set up. The necklace I most often wear is from Dryad Designs, a butterfly with a pentacle with aventurine set in the center.

It has been such a long year! But freedom is close, Debra. I have been mesmerized by Mars and Perseverance. What a feat ~ and what a feat it's going to be to return those Mars rock samples. I am aghast at all the science deniers and Covidiots in my country! Please take care, Debra!

Am I the only one who appreciated the conversation between the disgruntled face mask and the roll of toilet paper?