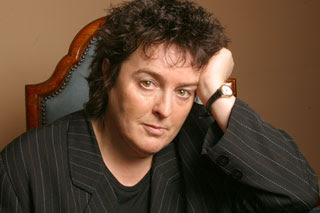 Carol Ann Duffy, Britain's first woman Poet Laureate, is a Scottish lesbian single Mom who is one of Britain's most accomplished and popular poets. She has won many prestigious poetry awards and is Director of Creative Writing at Manchester Metropolitan University.

I've only read one of her books -- The World's Wife (1999). Every sardonic (or occasionally angry) poem is written from the viewpoint of some famous man's wife or female relative. For example -- Mrs. Midas, Mrs. Aesop, Mrs. Faust, Queen Kong (!), Mrs. Lazarus, Frau Freud and Elvis's Twin Sister.

Here's one of the shorter poems in the book. In five apparently innocuous or even silly lines, it sums up every awful thing we know about women's historically overlooked contributions to, and devalued participation in, human intellectual progress:

Went to the Zoo.
Said to Him --
Something about that Chimpanzee over there reminds me of you.