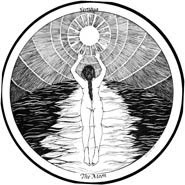 My tarot journey really picked up steam in 1990. I was just starting to walk the Goddess path and had joined a circle called the Lesbian Spirituality Group. It met once a month at the Winnipeg Gay and Lesbian Resource Centre and was led by an ex-nun who was now a lesbian activist. She introduced us to the Daughters of the Moon Tarot -- the original edition, which was black and white. You were supposed to colour all the cards yourself and then laminate the deck for use.
The cards fascinated me! I wanted to know more about the Goddesses they portrayed. I finally understood that there was spiritual meaning behind tarot cards, which had not been apparent to me from the Rider-Waite-Smith deck. I wanted to know more about mysterious tarot concepts like "major arcana" and "minor arcana." I was hooked.
(Incidentally, the second edition of the Daughters of the Moon now comes already laminated in vibrant colours, ready for immediate use. I guess the whole "colour it yourself" idea didn't really work out in practice. My Rare One bought me a second edition deck a few years ago, so I feel like I've come "full circle" now with the DOTM deck).

It is a nice deck. The 2nd edition has very vibrant colors. I hope they keep both versions in circulation!