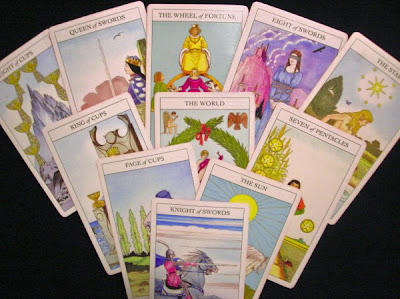 In addition to RS09's Master Classes, there were several optional workshops to chose from, which were led by various tarot experts. I chose "Lights! Arcana! Action!" taught by Thalassa, founder of the Daughters of Divination. Thalassa also produces the annual San Francisco Bay Area Tarot Symposium (SF BATS), which is the world's oldest continually-produced tarot event (first held in 1991). According to her website, Thalassa has "mad schemes for global domination through divination-centred events."
Two things in particular struck me as interesting and useful in Thalassa's workshop. One was her "Black Swan, White Swan" method of further illuminating any action or outcome suggested by a spread. To gain more information, the querent picks two more cards. The first card (the Black Swan) reveals something which the querent should let go or release. The second card (the White Swan) reveals something which the querent should move toward or embrace.
The second interesting thing was Thalassa's big bag of giveaway cards. She always carries a large draw-string bag full of miscellaneous tarot cards -- cards from decks where one or two cards have been lost, cards from decks she no longer uses, stray cards from wherever, etc. The cards are all mixed together in a jumble in her bag. She lets people reach in the bag and pick a card to keep as a special way of ending a reading or starting a conversation or "just because." I thought it was a fun idea and a neat way to interact with people.
The card I picked was the Page of Wands from . . . the Rider-Waite-Smith deck, of course! Am I starting to resonate more with it, after all these years?
Posted by Debra She Who Seeks at 07:00

you are so interesting Deb- i fear i am becoming addicted to your blog !!

Thanks for the compliment, Lisa -- *blush* -- you flatter me!