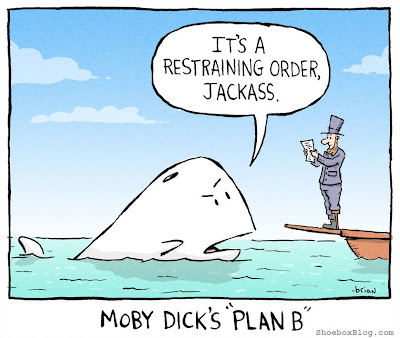 Bet you thought I'd abandoned Moby-Dick, didn't you? Nope, I'm up to Chapter 87 now. And I've diligently plowed through a seemingly endless number of "cetology chapters" as they're called. Chapters that contain more mind-numbing factual information about whales than anyone would ever want to know. But, in the exciting part of the book, the hunt for Moby-Dick is in full swing!

So I guess it's time for me to weigh in with my two cents worth on The Big Question -- what does the great white whale symbolize? Everyone agrees that Moby-Dick represents something huge and ultimately uncontrollable by humans -- Fate, God, Evil, Totalitarianism, etc. But I think that Moby-Dick represents something even more overwhelming, unthinkable or frightening than any of those things.

I take this as a clue. In a letter about Moby-Dick sent to his friend Nathaniel Hawthorne, Melville said, "I have written a wicked book, and feel spotless as the lamb."

[Tomorrow -- all is revealed!]

i think that is about where i screamed at the book...'oh just screw him already.'

Intriguing! I remember reading this book many moons ago. For some English class in college. I'm sure I delved into the convoluted symbolism, but all I can remember is that vivid last scene. I won't spoil it if you haven't gotten there. But seriously... if the Ahab is wicked, is Moby the lamb?