Ritual in my spiritual practice 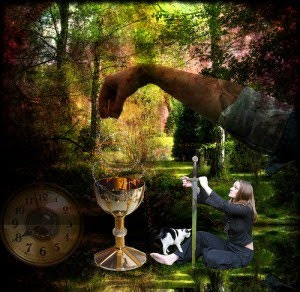 When I first started walking the Goddess Path about 20 years ago, I did a lot of ritual, both on my own and in groups. Coming originally from a Protestant background, I think I was ritual-starved. Protestants are not big on ritual and regard it with suspicion. It smacks of Catholicism, or worse. So being hungry for ritual, I quite enjoyed learning and performing the rituals of casting a circle, calling the quarters, honouring the four elements, smudging and purification and all the other rites and rituals of goddess circling. I found ritual very powerful, affirming and moving.
Over the years, however, I have found myself doing fewer and fewer organized rituals. Once my ritual anorexia was addressed and fed to overflowing, my need to actually perform a lot of ritual diminished in my spiritual practice. I am much more inclined today to simply perform small individual acts of casual ritual rather than to participate in any large-scale formal rituals.
My main ongoing participation in a group ritual setting occurs in the monthly drumming and chanting circle which I facilitate. More on that tomorrow.
Posted by Debra She Who Seeks at 06:34

Being protestant myself, I understand the starvation for ritual. However, having family from a Hindu background, I get my ritual fix quite easily :)

I love drum circles...so intense. Have you ever been to a gong bath? Amazing. Can't wait to hear more about your rituals.

I've never even heard of a gong bath, Caroline! It sounds very intriguing. Perhaps you should blog about it!

I've ALWAYS wanted to attend a drum circle, just haven't found the guts to seek out a local one yet. Can't wait for your next post to hear more about yours!

being an excatholic i had all the ritual i needed..I like lighting candles and saying my prayers...that's as much ritual as i can handle..i dont like organized religion..even my own..

I think the urge to attend and do ritual does wane as we walk the goddess path longer and longer... I think for me, daily living has become a ritual, and filled the space & need for formal type rituals... life itself is a magkical ritual!