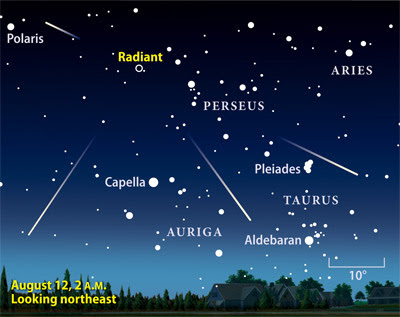 Every August the earth passes through the debris trail of the comet Swift-Tuttle, which causes the Northern Hemisphere's night sky to be full of shooting stars (actually, meteoric debris burning up in earth's atmosphere). In 1996, according to CBC Winnipeg, the Perseid Meteor Shower promised to be especially spectacular. The CBC advised people to view the event out in the country though, in order to avoid the obscuring effect of urban light contamination. So one night when no cloud cover was forecast, I set my alarm for 2:00 a.m., hauled myself out of bed in the middle of the night and drove about 20 miles north of Winnipeg (to River Road near Captain Kennedy Tea House) to stand under the stars and view the promised spectacle.
There was only one small thing that I failed to take into consideration. Every year, the City of Winnipeg fogs for mosquitoes in urban areas to keep the population down to tolerable limits. Of course, there is no mosquito control measures in rural areas. Complacent in my urban lifestyle, I didn't think to wear any mosquito repellent.
The first mosquitoes who discovered me immediately used their cellphones to call a few hundred of their closest friends and relatives to the feast. Those friggin' mosquitoes nearly ate me alive! And they were big, hungry bastards too. I lasted maybe 10 minutes before being forced to run back to the safety of my car. I drove home absolutely covered in bites. Itchy, itchy bites.
Believe me, the two or three shooting stars that I saw in those 10 minutes were NOT worth it. So don't talk to me about the wonders of the Perseid Meteor Shower. I don't want to hear it.
Posted by Debra She Who Seeks at 06:55

Cameron stayed up two nights in a row to watch...she underestimated light polution and cloud cover.

Me, I go to work at 4 in the morning. If it didn't fall on my head while driving to work, I missed it!

LOL! That is too funny. Well, not the bites, but the way you told it.:p) I got up to try to see something here in LA and, well, even though it was clear, there were too many LA lights to see anything. I gave up and went back to sleep. But I do adore a good meteor shower. I will date myself here, but I vividly remember sitting on a boat, on a lake, with a boy...watching Haley's comet go by overhead. Okay, we won't mention the year. Great post.

LOL...I am sorry! Mosquitoes are nasty little suckers (sorry bad pun)! I give you a big A+ for waking up at 2AM to drive 20 miles!

a friend and i went out to the country and sat in the back of my truck and watched...it was beautiful out, the breeze was cool and we saw jackshit..but we had no 'skeeters' and the 30 minutes out in the nice cool breeze was worth it...ha

LOL! Sorry about the bites! I stood outside and yelled at the sky like a lunatic. It was the 'peak' night supposedly and I was out for 20 minutes and didn't seen one meteor.

I'm out there yelling "Seriously! Not one bloody shooting star?" It then occurred to me that my neighbours might not be impressed... On my way back inside, I saw one. One. Oh well.