Play him off, Keyboard Cat! 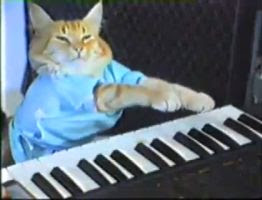 Remember those old movies about vaudeville where a long hook would slowly come out from the theatre's wings and then suddenly pull some awful comedian or terrible singer off the stage? Well, there's now a modern internet equivalent! Say hello to Keyboard Cat who often appears at the end of YouTube videos featuring stupid people or bad acting. Keyboard Cat plays a jaunty little tune on an organ keyboard, which is the signal for raspberries all around! Play him off, Keyboard Cat! Bye-bye, loser!
The original Keyboard Cat video was created by a crazy artiste named Charlie Schmidt, who essentially used his remarkably good-natured cat Fatso like a muppet and then posted the resulting video on YouTube. Somebody else saw Keyboard Cat's potential and appended the segment to a blooper video. Thousands of other YouTube video-makers have now followed suit. Keyboard Cat officially went viral in May 2009 and is now an internet star! Check out Keyboard Cat's Wikipedia page and also this hilarious website that collects the very best Keyboard Cat videos. And don't miss the shocking "True Internet Story" mockumentary about Keyboard Cat's life and rise to fame.
Keyboard Cat makes me laugh so hard that I pee my pants. I'm sorry, but it's true.
Posted by Debra She Who Seeks at 08:15

In a much too serious day, I need this! LOL Thank you!