The recent news of Osama bin Laden's demise got me thinking again about the time I was unwittingly acquainted with a terrorist. So I thought I'd repost my old blog item from February 2009 on that topic. 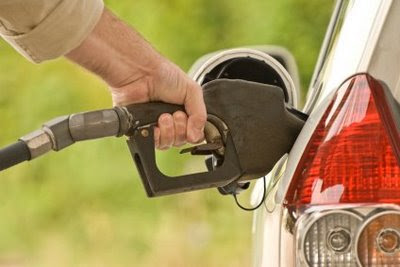 I once had a brush with an international terrorist in Winnipeg in the mid-1990s. No, it's true! Everyone shows up in The Peg sooner or later, you know.
Anyway, there was a very pleasant young Arabic or Pakistani guy who pumped gas at my neighbourhood gas station. He was good-looking, lovely to deal with and seemed to be genuinely engaged with his work and customers. I remember thinking, "Why can't more people be like him?"
Then one day I read an item in the Winnipeg Free Press about a local man who was arrested by American authorities at the border trying to sneak explosives into the States in the trunk of his car. The accompanying mug shot was none other than my friendly gas station attendant! Of course I recognized him immediately. It was so shocking!
The media didn't really make a big fuss about the story. This happened at least 5 or 6 years before 9/11 and we were all still blissfully ignorant of things like jihad, al-Qaida and sleeper cells. I certainly didn't grasp the full significance of the story until after 9/11.
I never saw any follow-up story about my terrorist, so I can only assume he was convicted and imprisoned. Who knows where he is today? Still in jail? Deported? Dead? I imagine him holed up in a cave somewhere with Osama bin Laden and saying "Well, at least we're not in Winnipeg!"
Posted by Debra She Who Seeks at 05:32

Aaand...that last line pretty much made my morning! I was in Winnipeg last Friday. Between my kid not cooperating at Children's, 2 hours of parking costing $9, and having to watch the royal wedding in re-cap, I'd have rather been in a cave too! Maybe not with Osama...

hay, they could be in calgary? that's worse isn't it?

He PUMPED your gas? Good God, that was in ancient times.

Wow....that is bizarre.....
The frustrating thing from my point of view is in the States we had agencies with intel that wouldn't talk to each other! (talk about male b.s......good lord....)
And who knows where he went.
I am sure this country has black holes people disappear into, though the punch line of "At least we're not in Winnipeg!" is a hoot! ;-D

we have terrorists here too.. we call them tourists.

Cool post! Imagine the stories connected to everyone we meet by chance...

'They walk among us' is sadly very true I suppose. How to protect the 99% of Muslim Canadians who simply want to live here and raise their families in peace? My heart used to break for some of my young students who would tell me how their fathers had been beaten while just walking down the street.

My daughter went to a very small college in eastern New Mexico. One road in, one road out, 2 stop lights and is on the road to nowhere. Anyway, two guys who lived in her dorm when she was there were in the deck of cards of terrorist issued after 911. She said she only knew them by sight. Her dorm was Middle east central at the college...and they were sharing what????????? Flight school where???????
The Olde Bagg

Of course he was..."good-looking, lovely to deal with and seemed to be genuinely engaged with his work and customers."

Why do people expect them to be wildly scruffy or anti-social?

They know well, the value of the old saying... You catch more flies with honey, than with vinegar.

When you are in the business of fooling people.

holy cow...one never knows i guess.
Never been to Winnipeg, so i can't comment on that.

Just goes to show...you never really know the people we meet on the street. I tell this to my sister all the time...she likes to walk the local forest preserve...and there are some creepy dudes out there...they seem friendly enough on passing...but you always look back over your shoulder once you pass 'em. It's a shame we have to be so cautious.

Ah, we never know, do we? Amazing story; amazing how they fit in. I am sure we have cells here in the city, but you just don't know who they are.
Mary

Always the cute ones... they are either gay or terrorists. Sigh. Only kidding, my guy is cute too. What a good story - hope it is warming up for you! Lois

Gees, spot on about the Peg! Hope Mr. nice isn`t holed up in Edmonton...just kiddin`!

You are one of the FEW people that can make me laugh about such a grim and sad reality..It just goes to show you that there's no black or white. Hey, I think you'd like this post. He's one of my fave. bloggers...

Wendy, thanks for the link -- hilarious!

Wow. Just wow. Kind of creepy how close you came to a terrorist.

If my memory serves me correctly I think the terrorists went to flight school here in Arizona.....yee.....gads.....what does that say for my state!!

Wow! Quite a story! I wonder if I've ever met a terrorist in my past, and don't even know it? Funny how everyone assumes that Osama was living in a cave, yet he was found in a large mansion and was even coloring his beard with Just For Men hair color for beards! This guy was too arrogant and full of himself to be living in a cave!

I miss the days of the Winnipeg Jets.

They still pump gas here in Jersey. Not terrorists specifically. Just, you know, it's illegal to pump your own gas. Seriously, I'm running out of feet to shove in my mouth.

WoW! That was a close encounter of the weird kind!

Awesome story! I met the dad from ALF once, and Neal McDonough was playing ping-pong in a bar in Hollywood when I was getting drunk with my brother once. But that's not nearly as cool as a terrorist.

That is a great story.
Winnipeg is so under-rated.

Nearly every time you read of someone committing a crime, you see news footage of the neighbors saying "He was such a nice person! I never would have guessed."

They wear their facades well, which isn't fair to the innocents who take the brunt of the blame for the guilty.

And for once, I'm sure that a lot of people in Canada and the U.S. would agree, everyone is happy that they weren't in Winnipeg!

That's CRAZY! I guess you just never really know who anyone is anymore. The person that sits next to me at work could also be a pole dancer at a strip club.

Wow. The fact that you knew a terrorist had to be an interesting revelation!

Pretty scary! People sure can fool you!

Hey, The Peg can't be that bad! What I do remember though are those MOTHER MOSQUITOES!!!!!! Your terrorist wouldn't have survived them!

yup, thats scary,, i know we had a bit of a scare here also.The locks here allow ships to enter one lake to the other (Great Lakes) supposedly there was a terrorist plan found to blow it up.Scary scary,, its right out front of us.Oh ya,, fifty babies really do rock,,, lol

WOW! Thats all I got. And Madtexter- what is wrong with being the pole dancer sitting next to you at work? Not THAT I pole dance or nothing!!!LOL!

The irony of this (the young man's ancestry + there he is, pumping gas for customers in North America) is tragic ...

I've come to understand that terrorism comes in infinite guises and forms ... just as mercy does. And god knows we humans can mask ourselves and our intentions to the nth degree ...