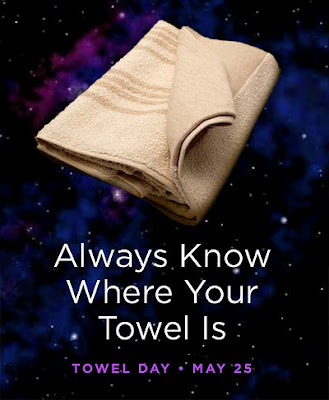 Today is Towel Day, when fans of The Hitchhiker's Guide to the Galaxy trilogy carry towels around all day to honour its brilliant creator, Douglas Adams. This world-wide event was first held in 2001, two weeks after Adams's untimely death at the age of 49.

This is what the Guide has to say on the all-important subject of towels:

A towel . . . is about the most massively useful thing an interstellar hitchhiker can have. Partly it has great practical value -- you can wrap it around you for warmth as you bound across the cold moons of Jaglan Beta; you can lie on it on the brilliant marble-sanded beaches of Santraginus V, inhaling the heady sea vapours; you can sleep under it beneath the stars which shine so redly on the desert world of Kakrafoon; use it to sail a mini-raft down the slow heavy river Moth; wet it for use in hand-to-hand combat; wrap it around your head to ward off noxious fumes or avoid the gaze of the Ravenous Bugblatter Beast of Traal (a mindbogglingly stupid animal, it assumes that if you can't see it, it can't see you -- daft as a brush, but very very ravenous); you can wave your towel in emergencies as a distress signal, and of course dry yourself off with it if it still seems to be clean enough.

More importantly, a towel has immense psychological value. For some reason, if a strag (strag: non-hitchhiker) discovers that a hitchhiker has his towel with him, he will automatically assume that he is also in possession of a toothbrush, face flannel, soap, tins of biscuits, flask, compass, map, ball of string, gnat spray, wet-weather gear, space suit, etc., etc. Furthermore, the strag will then happily lend the hitchhiker any of these or a dozen other items that the hitchhiker might accidentally have "lost". What the strag will think is that any man who can hitch the length and breadth of the galaxy, rough it, slum it, struggle against terrible odds, win through, and still know where his towel is is clearly a man to be reckoned with.

Hence a phrase which has passed into hitchhiking slang, as in "Hey, you sass that hoopy Ford Prefect? There's a frood who really knows where his towel is." (Sass: know, be aware of, meet, have sex with; hoopy: really together guy; frood: really amazingly together guy.) 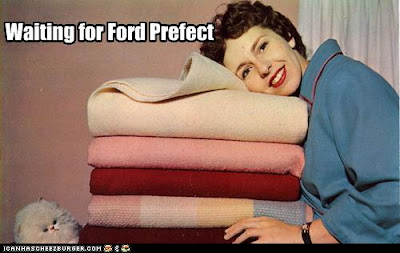 never heard of it, but it's brilliant :)

Oh, it's been years since I read the guide. Carrying a towel with me today though!

you can also use them to wave around at hockey games...go Canucks go!

As Towley, from South Park, used to always say, "Don't forget to bring a towel!"

you mean they wear the towel with nothing underneath all day? I'm taking part only if that is the case :P

LOL You Frood...I needed that hon...just a little sci-fi addiction feed..giggle snort. I have a new towel at my side!!
Hugs, Sarah

That book is the closest thing to a Bible my hubby believes in. He never goes anywhere without a towel! For him, every day is towel day, LOL.

I doubt many christians will applaud it. >,-) In fact, I may even lose Dear Readers.

But once in a while, I need to *get my nasty on* and say my piece.

Gosh, it's too late. I already left my house and there is no place where I can get a towel.
Mary

Towel's remind me of Linus from "Peanuts" and his blanket. In fact my "girls" LOVE their towels, seriously...I have to put one on my bed for them so that they get comfortable. So every day is "towel day" for them!

Haha I tought it was a joke but google says it's true so I belive you.

Would you believe I've never read it either? Must rectify that!

Ron has a fav towel, Sophie does too! Now I HAVE to go get one. and look for that book too.

Oh, oh, I never read it either. I do however have a fav towel with my initial on it. Okay it is actually the initial I share with my gym and i got it free when I joined, still I honour it today!

I haven't thought of those books for years. I must dig them out this summer and reconnect with Ford Prefect. Now I must go find an appropriate towel.

Thanks for your comment on last night's entry! We did remain safe as those tornadoes we filmed didn't actually touch down but there were PLENTY in the Dallas/Ft Worth area that did... news crews are still trying to figure out exactly how many touchdowns there were.

...and then she quotes Douglas Adams. Seriously. Do you have any flaws?

I don't think I'm brave enough to carry a towel around with me today although I sure could use it to dry off. It's pouring here.

I dressed as Arthur Dent for a Halloween party and no one got it, sadly.

How come I didn't know about this!?

oh its been a while since I heard that,, I lost you for a bit,, for some reason your new posts aren't coming up and I had to search you out,, I now have to back read your posts,,

For one glorious moment, last Sunday at exactly 6:47, every one of my towels was clean, warm, and dry at the same time. Yes, bliss! I take towels with me wherever I go. There are six in the boot of my car right now.

Even one of my kitties has to have her towel with her, whenever she settles in for a snooze. .granted, it is a hand towel, but she is a small kitty! She drags it to wherever she wants to lay, and snuggles in with it. .she instinctively knows the value of a towel (and no other kitty had better touch it! . . she must be a Galaxy Hitchhiker!

thank you for visiting,, I knew you would understand the drumming and bowl,, good stuff,