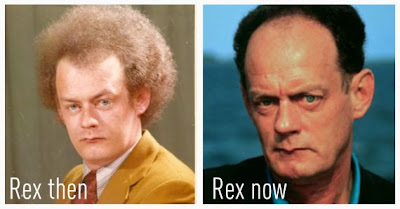 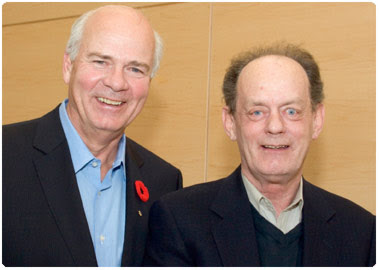 God knows, Rex Murphy has a face only his mother could love. But, as if to make up for it, his Irish ancestors have passed down to him a maximum dose of the silver-tongued gift of the gab. As a result, he is one of Canada's most ubiquitous political and social pundits. You can find him opining on TV (CBC's The National newscast), hosting on radio (CBC's national call-in show, Cross Canada Checkup) and palavering in print (the National Post newspaper).

And now, he has his own meme too. In the US, there's a popular meme where Steve Buscemi's eyes are photoshopped onto the faces of Hollywood stars. In Canada, some unknown wag has started photoshopping Rex Murphy's eyes onto the faces of Canadian politicians. You can check out the entire gallery for yourself at Canadian MPs with Rex Murphy's Eyes but here are my personal favourites --

Defence Minister Peter MacKay -- will you still be such a playa with the ladies now, big guy? 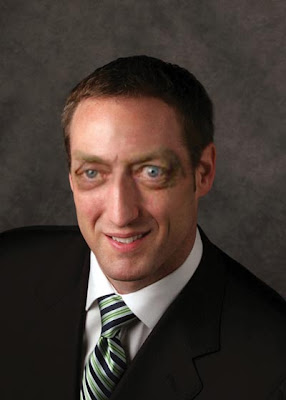 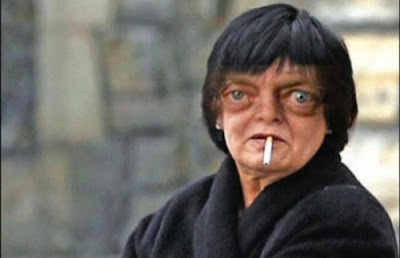 Liberal MP Justin Trudeau -- not such a pretty boy now, are we? 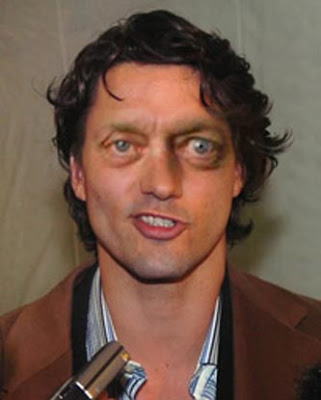 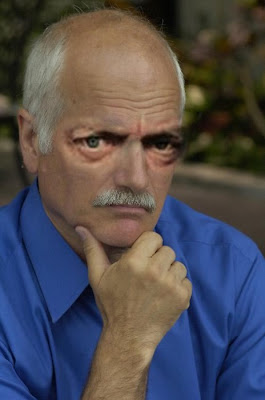 Look how the newly elected Leader of the Green Party, Elizabeth May, is celebrating! Now there's a happy gal! 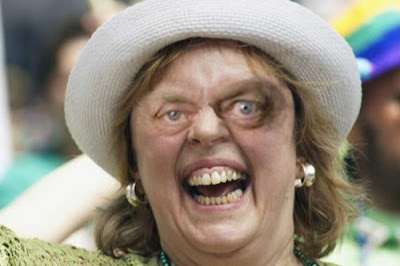 I think that final one will give me nightmares for the near future!

Oh those photos were scary for first thing in the morning! Incredible how he looked the same as a younger man, and just got older. [that doesn't really make sense, but he really always looked like an older man!]I give up. Have a great day! Lois

never heard of him, but he sure does look scary :)

though he's backed off quite a bit since his early days, murphy's main problem remains, as does that of the majority of talkshow callers, namely: his obvious, self-appointed liberal apologist bias

the scariest one might be the first pic of him with the afro!!!

Oh wow! They really mess up the women, don't they? -giggles-

DEBRAH! Secnarf is now hiding under the bed and won't come out!

LMAO>>>this is mighty disturbing gurl! Still laughing me arse off!

Rex is THE MAN!!! I love him and what he has to say about anything.
Debra, this is a riot! One of the funniest things I've ever seen! And I am sure Rex would enjoy it too and would have something astounding to say about the virtues of self-deprecation.

I can't believe I was unaware of this site!! Bev Oda has never looked s good. I'll be laughing for days.

Hahahaha! My teenage daughter showed me this about a month ago...I LOVE it!!! I laugh till I pee!!!

Look at those eyes. You are too much. Love ya.
Mary

I get more education about Canadian politics from you.

Did you see Rex Murphy with Stephan Harper eyes? Too funny!

Oh god, this was funny! I actually kind of like Jack Layton with Rex Murphy eyes better. Maybe they should have a baby.

Is it wrong if I have a hankering to watch Goonies now?

they look more like the eyes of marty feldman..check his picture out.

ah it's nice to see some good old canadian humor.

Wonderful - I am laughing my head off.

Photoshop does surprise me. He does have the eyes!

first I want to thankyou for not rocking,,,,(I knew I would regret those words) lol,, and ,, those are spooky bad ,, oh really spooky bad!

Oh tootes, how creepy! I do believe Rex's mother placed those pictures in her basement to scare the shit out of the mice! But any of these would do the trick! Your so funny,lol

Rex Murphy is the best.

I'm not familiar with the man, so my opinion is based solely on these photos. .in his then photo, his hair is the biggest faux pas, distracting from those intense eyes and expressive eyebrows.

In his now photo, he isn't that bad looking. .not model perfect, (the majority of us aren't!)but one with attractive features, and again his piercing eyes draw you in like a magnet!

In his most recent photo, I see a man that is full of character, but showing the passage of time, with a wealth of experiences and stories to share. His hairline reminds me of both of my Grandpa's, of English, and Irish-Welsh descent, respectfully.

So while I find the photoshop images amusing, I also find it intriguing that his aged eyes don't scary at all. .but enlarging them, and sticking them on other people's faces, makes them look grotesque. .which proves that our individual looks are ours, only, to fit our faces. It also makes me wonder what these people look like without the computer imaging fun. .and maybe this is an improvement?

Oh my! With a mug like that he had better have the gift of gab.

OMG..these are wonderful!!! I'm just choking on my morning tea...can't take my eyes off young Justin...just hilarious with his twisted mouth! I much admire the clever minds that come up with these bizarre ideas...:)

Makes me think of those sad big eyed waif pictures from the 60s and 70s, but these are much scarier!

BTW ... How far out of the loop am I, but what the hell is Rex Murphy doing at the Post?! I thought he wrote for the Globe & Mail! What's this world coming to, eh?
;-D

You're right, Jaliya, Rex Murphy did write for the Globe and Mail until just a little while ago. Then they had a big falling out over his views on global warming (which Rex regards as malarkey). That's when he went over to the National Post.

Well, there you go, eh ... even Rex can be daft about certain things ... and I'm truly dismayed to read that he thinks human-caused climate change is malarkey :-(

Poor Elizabeth May -- that photo would make a perfect and terrible attack-ad picture for spin doctors ...

I have to come back to this post at least once a day --> I'm still laughing out loud over these faces!