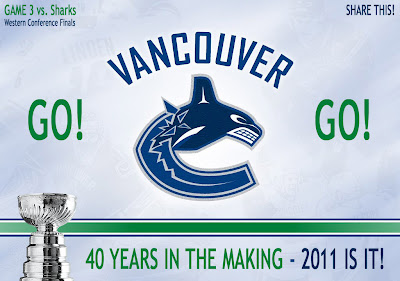 The handwriting is on the wall. .how can anyone dispute the solid facts as you have presented them? Are you sure that you aren't an attorney?

I agree with Suzie above ,, should have been a lawyer,, wonderful post!

GO CANUCKS!!!
Will be cheering them on from my little corner of *Canada South* here in the States!
WHOOOOOO---HOOOOOOO!!!! :-D
(they gotta win!)

Well no one can dispute these facts! Thanks for letting us know, Debra. Go Canucks!

Woot! I may have to drive to the coast just to join in the celebration! Go Vancouver Go!

Great, now I know where to place my bets

Being a Vancouverite my heart just leaped of joy reading this post. The facts are loud and clear
Thank you :-)

Oh hell yeah! I can't wait! It's such a big deal for us over here in Vancouver. It's hard to believe that it has been 17 years since we were this close, but I really think this is our year! Thanks for cheering us on! - G

I used to live in Van..figures that they'd get to the play-offs the year I move out of the province;p

i hope vancouver wins too! it is time for lord stanley to grace their halls! looks like you guys just got another canadian team. atlanta is moving to winnepeg!

Wishing your team the best. Don't know much about the game, but I got to side with my friend.
Mary

And husband said the Bruins are in the finals. First time in years and years. Not that I'm for them. Just saying.

Haven't been involved with hockey since way back in the 90's. When I discovered this hot lookin' guy on Montreal Canadians. -grin- That was wayyyyyy back when not all wore a helmet. So his gorgeous black hair and *purrrddddddy* face were out there to see, all the time.

Yeah, he's probably in some long-term-care facility for head injuries now. But....... That was then.

Good luck to your team!

She-who-still-can't-make-my-preferred-pics-post. But I think its my issue and not Blogger, this time.
~♥~

since the stars weren't even in the running I will be glad to cheer your team on..goooo canaderians.

That is an awesome tidbit. I can't wait to start repeating it!

Well I was sad our Chicago Blackhawks weren't in there this year...but let's face it they played like sh** this year. Go Canucks! WOOO HOOO!!!

The 'nucks have an awesome team, very talented, no doubt. The series will hinge on the performance of Tim Thomas, Boston's goalie.

I'm very sad this time of year. After this series is over...no hockey for four months!

Debra, are you happy about hockey returning to Winnipeg?

Leviathan, I am ECSTATIC that NHL hockey is returning to Winnipeg! I was living in Winnipeg in 1996 when the Jets left and believe me, it was a grim day in The Peg, man, grim.

hey now!
I live in Boston, so I gotta be the only one here saying GO BRUINS!!! sorry! :D

That's okay, Misty! I still like you! You can't help it if you live in Boston.