Today is the 67th anniversary of the atomic bombing of Hiroshima on August 6, 1945. When we were in Japan this spring, we visited the Hiroshima Peace Memorial Museum and Park located at Ground Zero (also called the Hypocentre) where the bomb hit.

I chose to spend my time there outside, exploring the large and beautiful Memorial Park which was full of trees, flowers and families picnicking under the cherry blossoms. The park both memorializes the dead and expresses Japan's hope for a nuclear-free world of everlasting peace. 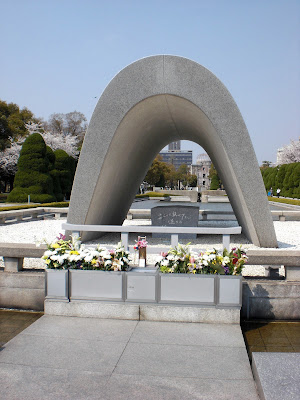 This is the famous Industrial Promotion Hall which alone miraculously withstood the blast despite being only 160 metres (175 yards) from the Hypocentre. It has been left in ruins to remind people of the bombing. 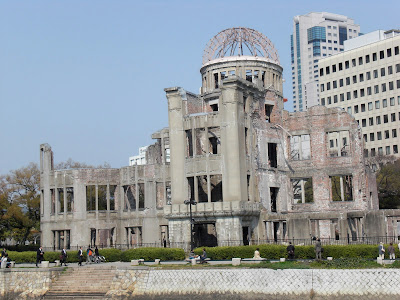 The building is now often simply called the A-Bomb Dome. 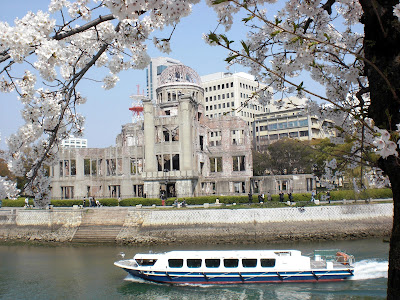 This burial mound in the centre of the park is a mass grave of the cremated remains that were able to be recovered from Ground Zero. It is protected by a fence and surrounded by flowers, lanterns and peace prayer sticks. 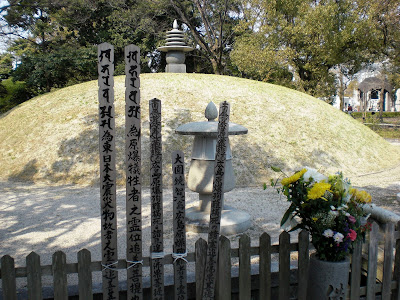 There are many profoundly moving statues in the park. I will do other posts about them at another time. Today I will simply post a photo of the park's statue of Kwan Yin, Goddess of Mercy and Compassion. 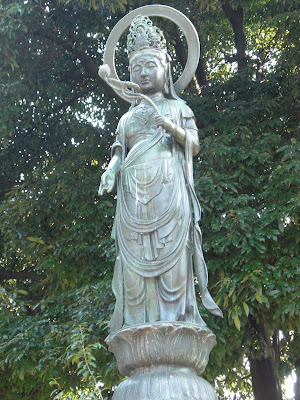 [All photos by Debra She Who Seeks]

Beautiful post. Why do we so often forget the horrors of war? I would like to believe if we remembered, the world would be a more peaceful place. We are our own worse enemy.

So moving. My daughter and I recently read the story of Sadako and her 1,000 paper cranes. What a beautiful yet tragic tale. Hiroshima was such a disgraceful atrocity...

we thought the Americans would learn something from it, and yet, they're still the biggest threat for peace in the world :(

I have heard of this place - very sobering indeed.

What a feeling it must give you to walk these grounds. That photo of the mass grave of the cremated remains gave me the chills. It's horrible what people will do to each other.

A day that must be remembered....so that it never happens again....Kwan Yin is an amazing Goddess....the prayer sticks are humbling symbols of the families that still suffer......

I bet that'd be chilling to walk around such a site, but still something everyone should experience at least once, to remind ourselves that humanity is really capable of some atrocious things.

I read John Hersey's book, Hiroshima, many years ago. Horrifying, to say the least.

The rational and justifications for dropping, not one, but TWO bombs on civilians, has never set well with me.

It's amazing to me that beauty can come out of such a horrific time. I love the statue of Kwan Yin and know she's protecting all those who suffered from such pain.

No matter what they've replaced it with, that mound is quite a gruesome reminder. I've been reading about people who managed to survive both bombs. What a horrendous event in world history.

An incredibly moving place. I can only imagine the emotion one must feel being there in person.

thanks so much for showing this. i had never seen it.

Oh wow! Wonderful photos! Really reminds me of the horror of things, and how ALL weapons of mass destruction should NEVER exist!

Thanks for the sharing this, and the reminder.

This is such a touching post! Those poor people that went through this! They have done a beautiful job, on making such a lovely memorial!

I read recently that one of the grandson's of Harry Truman was supposed to visit that memorial.

I didn't realize the significance of this date; thanks for the reminder. Such a beautiful post on a memorial commemorating such a tragic human event. The tone you took in the writing made me feel that I was walking the memorial with you, quietly, somberly; reflecting on the people affected on all sides.

Debra how was it in Japan this year? I have always wanted to visit, but my husband is afraid due to the nuclear issues that happened after the earthquake :( It looks so stunning thought. My aunt's husband in Nisei, first generation born outside Japan. I used to spend holidays with his family sometimes and I loved everything about it. They live in Sao Paulo, where they have the biggest Japanese colony outside Japan and I was enchanted. I sure hope to make it there...

kwan yin was/is said to be androgynous... regardless, we need both mercy and compassion today, perhaps more so than 50 years ago....

I thought it was pretty thoughtful that Truman's grandson went to the ceremony.

This is so beautiful. thanks for posting this.
Did you see my post about Louis Zamperini? He was a POW in a Japanese prisoner of war camp and when he went back to visit Japan, the people there had no idea that there had been a camp right within their midst. They then raised the money to make it into a Park for Peace.

This is quite painful for me to see, but I can sure appreciate the beauty and the meaning behind it...

Many years ago after I read Sadako and the thousand cranes to my class they kids organized a school wide paper crane making blitz. We sent them to Japan and we received a picture back from Hiroshima showing our cranes at Peace Park. You are very blessed to have actually seen it, Debra! Thanks for the post.

You post some interesting, relevant things. I would like to be interesting and relevant lol but I dont see it happening any time soon. The images in this post are great.

When I see pictures like this I wonder if we will ever learn. I want it so bad and then I read a comment some man wrote about the shooting of the 6 Sikh people this week in their place of worship. The commenter said "Maybe if the Sikhs would adapt to western dress and lifestyle and assimilate into north american society, they wouldn't be such targets of hatred.The ones in my metro area live in their own ethnic enclaves,and usually hire their own.The cab company here is owned by east indians,and I've never had a white driver yet." I then know we are no closer than we were 67 years ago.
Will we ever learn to live and let live?

Enjoyed this post, learned a lot. Thanks for your comments on mine. I'm wrapping up the long hot summer and easing back into blogging. Playing catch up on reading eveyone's posts.

Good post.
We were there quite a few years ago, and even now I remain quite inarticulate about the area and the experience of seeing it.