Why I Love the Sedin Twins: Intro 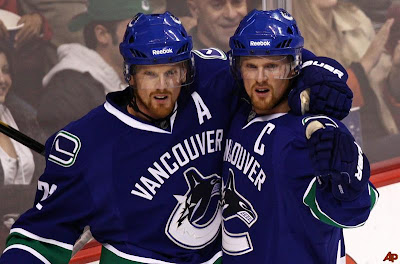 Two of my favourite NHL players are Henrik and Daniel Sedin, 31-year-old twin brothers from Sweden who play for the Vancouver Canucks. Henrik (centre) is the Canucks' captain. Daniel (left wing) is the Canucks' alternate captain.

In addition to their NHL careers, they won Olympic gold medals with the Swedish National Team at the 2006 Winter Olympics in Turin, Italy. 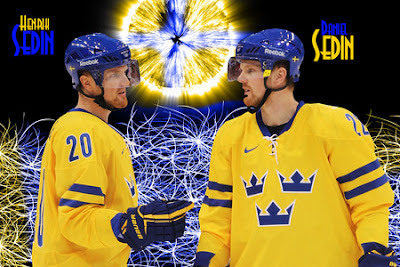 Apart from the excellence of their hockey play, there are 3 specific reasons why I love the Sedin Twins. Tomorrow -- Reason #1 -- hint: music is involved.

i can not wait to find out!

I am very interested in hearing the rest of your story, don't get me wrong.

Well, this is news. I've never given up on the Maple Leafs and although I don't have Frank Mahavolich's picture pinned over my bed anymore I haven't really gotten to know too many players these days. Be interested to find out.

Reason one music? They better not be a pop duo!

Not a hockey fan, but I will say it is like seeing double.
Mary

Do you still have lots of squash?

Is is hockey season already?

Now I'm curious to find out what it is! It surely is like seeing double when looking at these guys.

The suspense is killing me!!

I love the Sedins - a girl at work hates the Sedins. We can't pass in the hallways during hockey season. I will wait patiently for tomorrow :>)

Okay, Debra, into the penalty box for keeping us in suspense.

Just dying to find out, actually I'm a terrible Cannadian who doen't watch any hockey, but love to read you. :) And wise information about the jalepenos...

I would have said my number one reason is because they are so hot looking...but music? You've got me wondering...

They really do look identical. I've never watched a hockey game in my life!

I remember when they won the gold...i was sorta pissed..