Have you read the novel Life of Pi by Canadian author Yann Martel? Or have you seen the film directed by Ang Lee that is currently in movie theatres? 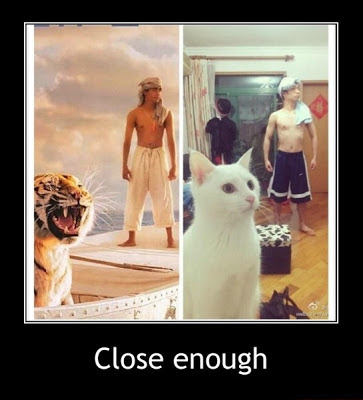 Then you know the story is about an Indian youth named Pi Patel who is trapped in a lifeboat at sea with a ferocious tiger named Richard Parker. 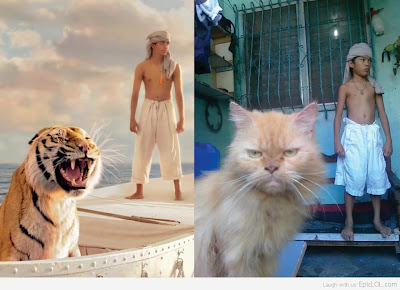 The story explores the very best and highest expressions of human nature and the very worst as well. 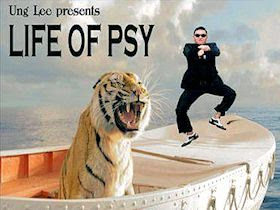 What is the true meaning of good and evil? of human nature? of life? You know, the BIG questions of existence. 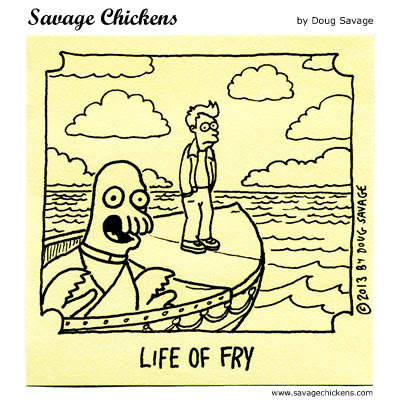 The novel won the Man Booker Prize for Fiction in 2002. The film is currently nominated for 11 Academy Awards, including Best Picture and Best Director. 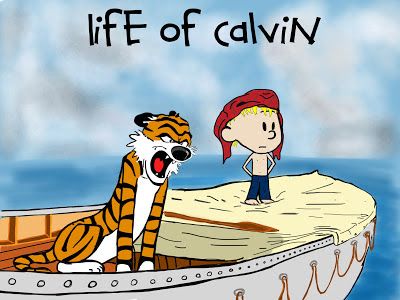 The film is beautifully shot and has many visually stunning scenes. Plus a lot of action due to, you know, the presence of a man-eating tiger. 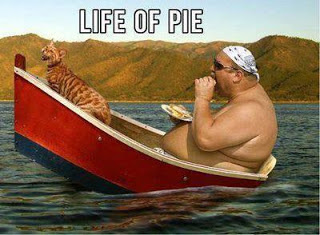 However, I think the screenwriters chickened out a bit by softening the novel's full horror, which is simply hinted at and soft-pedaled in the film rather than being as unflinching as in the book. 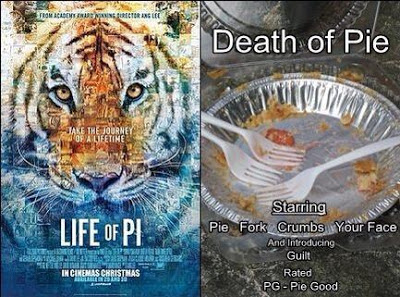 But I still highly recommend both the book and the film. They will give you much to think about. 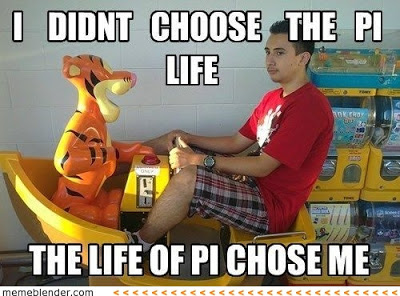 I downloaded it on my kindle and it only cost 20 pence. Bargain!

hahahaha...i love the fat guy in the boat!

Oh all those punny pics are great. Love The Life of Fry!

I nearly died when I saw the look on the face of the second cat, I swear he is thinking, "This is bullshit. If that guy tries eating me, I'll rip in to pieces."

I've added some pi to my yummy reading list ;-)

I've heard so much about it, but never read it. I love that cartoon with the man in the boat. Too funny.
Mary

love all the pictures... Havent seen the movie or read the book. Cant decide which I want to do first...

tried, failed. The cartoons are great,though!

Hahahaha...love these images! Well, you certainly know how I feel about this novel. It is definitely on my top 10 list of favourites. This may very well be one of the few books I read more than once; something I hardly, if ever, do. The only thing left now is to watch the movie. Hubby just finished reading the book, so I hope we see the film as soon as possible.

I loved the pie one!

Haven't seen the entire movie. Though the snippets I have seen of it, show it definitely to be worthy of the Oscar nominations. The book is on my reading list.

Heard a lot about it, never seen/read it. However, how fearsome can a tiger be if it's named Richard Parker? It sounds like something that would fetch me tea if I asked it nicely.

Have not read the book or seen the movie. (God what is wrong with me that I am so far behind in things?)

Love the pictures though. Funny

That cat with the little boy is dreamy!

A classic post Debra! Loved this - even though i have neither read the book nor seen the film. But I will - soon!!!

I love that last one

I don't think they're doing a good job of promoting this movie. The ads make t look like some cute kids' movie. I was surprised when it got nominated for best picture. Since then, I've heard a lot of good things.

Some of those photos really gave me a good laugh for today, thank you!

I read it years ago, it was a great read! Of course, can I remember any of it now? No. LOL Maybe a re-read is in order.

I can't wait to see this! I have not read the book and am worried what will happen to the tiger. Meanwhile, loved your adding of the pictures with your serious commentary. I would have loved to see HRH in the scene with the fat guy in the boat. That cat looks worried.

Tried to read it twice - failed. But maybe I should try the movie. Loving all the pictures though - they can inspire me for today!

Great pictures, Debra, perfect as always. I feel kind of bad that I have neither read the book or seen the film. I am not sure why.

I would very much like to see this movie. Or even read the book. Either or, whichever comes to me first! So long as I am not eaten by a tiger!

My son and I did see the movie but I didn't understand it...my son 11 years old keeps having to explain it and I'm still having a hard time comprehending. Silly me...I need to read the book!

read the book and cringed and finished.
will do what I always do, wait until it comes out on DVD and rent it.
Love your gathering of pertinent funnies to share...great job.
Oma Linda

Very silly, Debra! I read the book and saw the movie. Unfortunately, they had to Hollywoodize it but I still thought it to be beautiful. I love the "Life of Psy" photo and the Death of Pie photo. Thanks for the chuckle

BWAAAAHAHAHAAHAHAAHAAHAAA! OMG!! I think I wet myself. That was too funny, girlfriend! Loved it.

OMG those are all so great!

I tried to read the book but failed:( I feel almost guilty about that, ha, seeing as everyone loves it so much. Perhaps I should try again.

I have it on my list of books to read..I want to see the money but will wait till it comes to video.

Haven't read/seen it, but Mr. RK liked it, and I loved these!

My mom and brother saw the movie. I have to admit, my mom didn't really like it and I am not sure why? I think she felt lost? I have never seen it or read the book.

I loved the book but have yet to see the film. Will do as soon as it hits video.

Hi, Debra!
We watched this movie in 3D, yes, what I liked the most were special effects...However that thought of a grown up Pi that through his adventure (his own survival, and loss of the whole his family) he saw that God exists..I'm sorry but I refuse to believe in such God who needs to kill as to proof his existence?! rest. movie is good, actors are too.

a devotee of cbc-radio-1, where i usu hear cultural stuff, i'm familiar with the author and his book, not read it, yet... will try to catch the film, too

I read the book but I found it brutal to get though. I enjoyed your post about the book way more than the book!

Love those photos. It never would have occurred to me to recreate the movie poster. I guess I'm just a dog person.

I read the book when it was first published and just saw the movie Saturday. So very good. I did see it in 3D and thoroughly enjoyed it. Absolutely beautiful. To me it made the ocean seem so much more vast and desolate....but maybe that came across in regular too.

Loved the cartoons! Now I just have to read the book! Book first - then movie!

Ha ha! Love all these funny pics! I haven't read the book or seen the film. Perhaps I'll Netflix it when it is released on DVD.