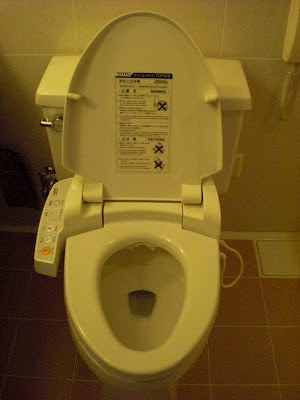 Japanese Toto Washlets always have heated toilet seats that activate when you sit down. Then, on the wall or on an attached console arm on the toilet itself, there are assorted buttons that you push to make the toilet perform various functions. 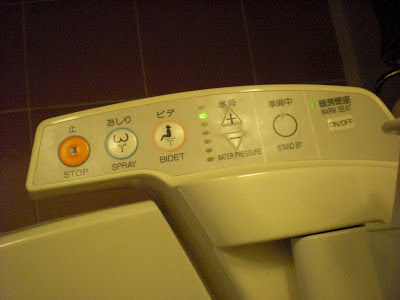 The most common buttons activate a frontal water spray or a rear water spray for maximum cleanliness. You can customize the water pressure for those functions with another button. Deluxe models have a button for dispensing air freshener too. And the so-called "princess models" have a button that activates the sound effect of running water to drown out any unladylike bathroom noises you may make. We encountered the Toto Washlet's most ultra-deluxe feature only once on our trip, where simply walking into the bathroom stall causes sensors on the toilet to automatically raise the lid for you.

Oh, and of course after all that, there's a button to flush the toilet too. Sometimes that button is located on the floor so you just step on it. Deluxe Washlets flush automatically by themselves.

And let me tell you -- when we got home to our own North American toilets, we sure felt like we were being forced to slum it, LOL!

I was going to ask about the ' flush ' button. You just cant imagine how Indian ones...

wow, the limousines of toilets!

ooo that sounds like a very luxurious toilets!! I think I want one :)

Looks like a good place to spend time. Could probably get through a couple of sections of the newspaper.

Wow, talk about fancy! A magazine holder right beside one of these babies is a must!

Ohh yeah I felt the same when I returned from my Japan trip. We are so backward when it comes to luxury toilets. LOL I did however, use the traditional toilets as well.
Nicole/Beadwright

It's official. Japan is the pinnacle of civilization. We're just grunting barbarians in comparison.

And there is something else out there now that I never knew I needed! Heated seat?? I'm all in!

Wow! These must make the potty experience quite entertaining. My toilet does nothing except the the self closing quiet lid. I feel deprived now!

What I wouldn't do for one of those - the Princess one would be great!

WANT! Those are awesome. Everything less after something that fancy is always a loss:( I wonder how much one of those suckers would be to install??

i need one of these but my husband already spends way too much time on the pot!

We did n't have these in our schools! lol

Modern life just complicates everything! This would be nice to experience after toilets say in Cambodia!

~i think my love and littles would move right in...i would never see them if we had such a toilet! much love light and blessings~

How much does one toilet need? Just give me a pot to piss in and the ability to flush it and I'm good!

this is the first time somebody blogs about toilets, Debs you will go into history :PPP

I am still traumatized from my first experience with a bidet when I was 13. I was trying to give a urine sample at Woman's College Hospital and the room [closet] had this strange toilet which was not a toilet, and the water was HOT. Rude, to say the least. I don't think I've been near one since.

And the toilets in Mexico have no seats!

As a Realtor, I see these toilets in homes for sale every once in a while. They are expensive so they aren't the norm.

Oh my. Going to the washroom turns into a whole experience. I know I'd be spending more time in there if I had one of those!

I want one of these. I felt like I was slumming it again when I went from a self-closing lid to a regular lid. One of these would be heaven!

I'd be all confused trying to figure out what to use and then probably would end up being sent into outer space like a projectile!

oooooo now that's what is a potty experience!!

Ok, so I had thought that all those fancy gadgets on their toilets were a bit ridiculous. I still think it's a bit much, but I REALLY like the idea of the heated seat.

Wonder why we don't have toilets like that here?

I think I would be in there all day, playing around! LOL! Actually, my mom and brother are Buddhists. We have a lot of Japanese friends. One of them have this toilet in their home. It's always a treat to go there! LOL!

Fantastic! I showed my son, who is in love with everything Japanese, and he has seen one as he scours the internet for anything pertaining to the Asian culture.

Forced to slum it. That's funny.

YES! Give me this over those 'squat' models!!! Any day!

Did you go to that giant department store in Akihabara? They have like a whole floor just devoted to toilets.

How did we ever get by when we had to venture outdoors to the out house to tend to our business and sitting next to us was the sears catalog... for reading as well as other uses...

All I want my toilet to do is catch my stuff and not be much smaller than my rump. I'm a girl of simple needs.

If I win the lottery I am buying one!